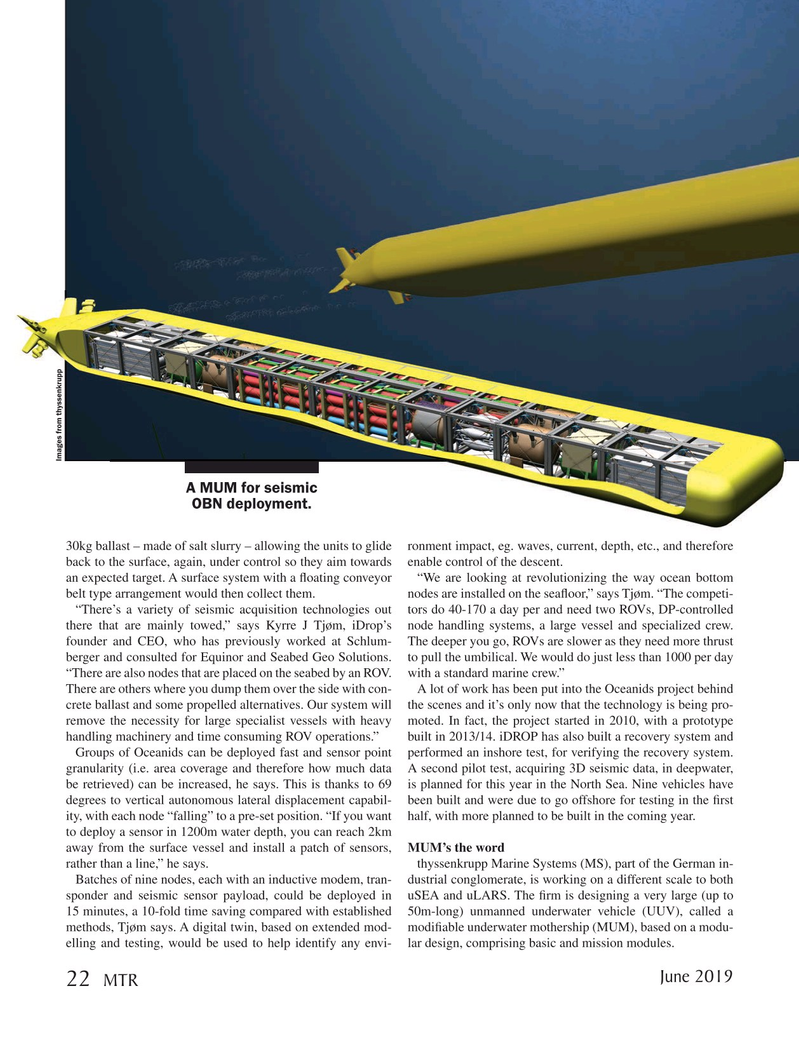 30kg ballast – made of salt slurry – allowing the units to glide ronment impact, eg. waves, current, depth, etc., and therefore back to the surface, again, under control so they aim towards enable control of the descent. an expected target. A surface system with a ? oating conveyor “We are looking at revolutionizing the way ocean bottom belt type arrangement would then collect them. nodes are installed on the sea? oor,” says Tjøm. “The competi- “There’s a variety of seismic acquisition technologies out tors do 40-170 a day per and need two ROVs, DP-controlled there that are mainly towed,” says Kyrre J Tjøm, iDrop’s node handling systems, a large vessel and specialized crew. founder and CEO, who has previously worked at Schlum- The deeper you go, ROVs are slower as they need more thrust berger and consulted for Equinor and Seabed Geo Solutions. to pull the umbilical. We would do just less than 1000 per day “There are also nodes that are placed on the seabed by an ROV. with a standard marine crew.”

There are others where you dump them over the side with con- A lot of work has been put into the Oceanids project behind crete ballast and some propelled alternatives. Our system will the scenes and it’s only now that the technology is being pro- remove the necessity for large specialist vessels with heavy moted. In fact, the project started in 2010, with a prototype handling machinery and time consuming ROV operations.” built in 2013/14. iDROP has also built a recovery system and

Groups of Oceanids can be deployed fast and sensor point performed an inshore test, for verifying the recovery system. granularity (i.e. area coverage and therefore how much data A second pilot test, acquiring 3D seismic data, in deepwater, be retrieved) can be increased, he says. This is thanks to 69 is planned for this year in the North Sea. Nine vehicles have degrees to vertical autonomous lateral displacement capabil- been built and were due to go offshore for testing in the ? rst ity, with each node “falling” to a pre-set position. “If you want half, with more planned to be built in the coming year. to deploy a sensor in 1200m water depth, you can reach 2km away from the surface vessel and install a patch of sensors, MUM’s the word rather than a line,” he says. thyssenkrupp Marine Systems (MS), part of the German in-

Batches of nine nodes, each with an inductive modem, tran- dustrial conglomerate, is working on a different scale to both sponder and seismic sensor payload, could be deployed in uSEA and uLARS. The ? rm is designing a very large (up to 15 minutes, a 10-fold time saving compared with established 50m-long) unmanned underwater vehicle (UUV), called a methods, Tjøm says. A digital twin, based on extended mod- modi? able underwater mothership (MUM), based on a modu- elling and testing, would be used to help identify any envi- lar design, comprising basic and mission modules.