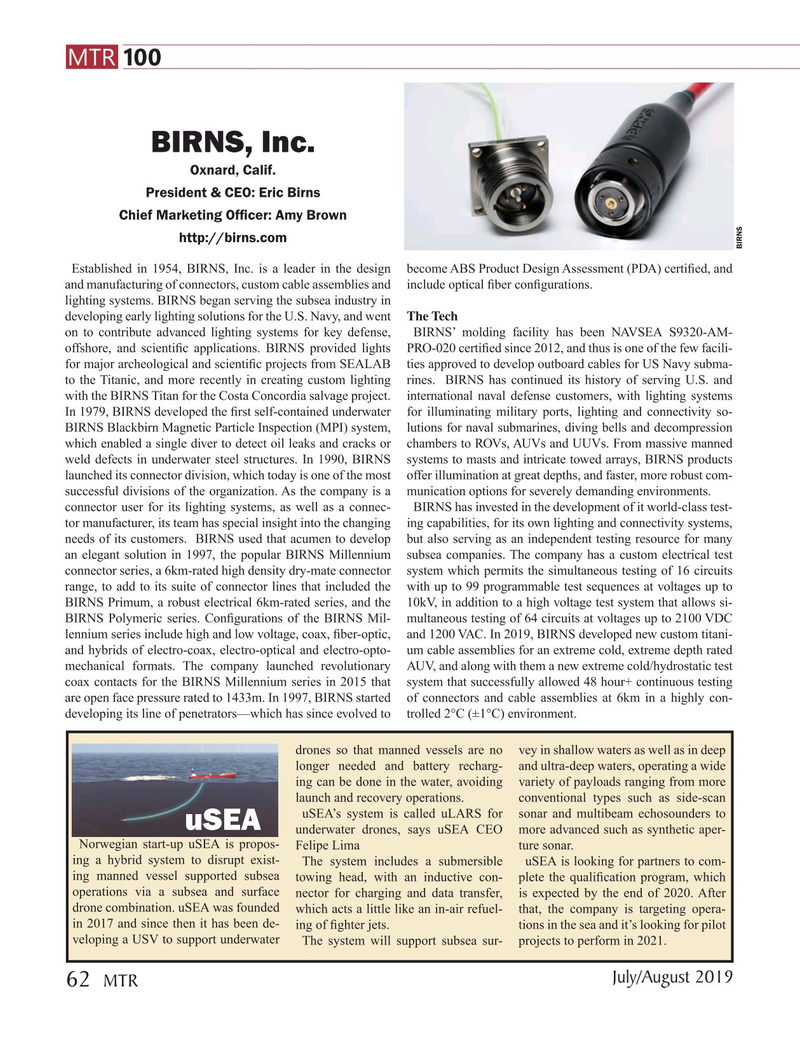 Established in 1954, BIRNS, Inc. is a leader in the design become ABS Product Design Assessment (PDA) certi? ed, and and manufacturing of connectors, custom cable assemblies and include optical ? ber con? gurations. lighting systems. BIRNS began serving the subsea industry in developing early lighting solutions for the U.S. Navy, and went The Tech on to contribute advanced lighting systems for key defense, BIRNS’ molding facility has been NAVSEA S9320-AM- offshore, and scienti? c applications. BIRNS provided lights PRO-020 certi? ed since 2012, and thus is one of the few facili- for major archeological and scienti? c projects from SEALAB ties approved to develop outboard cables for US Navy subma- to the Titanic, and more recently in creating custom lighting rines. BIRNS has continued its history of serving U.S. and with the BIRNS Titan for the Costa Concordia salvage project. international naval defense customers, with lighting systems

In 1979, BIRNS developed the ? rst self-contained underwater for illuminating military ports, lighting and connectivity so-

BIRNS Blackbirn Magnetic Particle Inspection (MPI) system, lutions for naval submarines, diving bells and decompression which enabled a single diver to detect oil leaks and cracks or chambers to ROVs, AUVs and UUVs. From massive manned weld defects in underwater steel structures. In 1990, BIRNS systems to masts and intricate towed arrays, BIRNS products launched its connector division, which today is one of the most offer illumination at great depths, and faster, more robust com- successful divisions of the organization. As the company is a munication options for severely demanding environments. connector user for its lighting systems, as well as a connec- BIRNS has invested in the development of it world-class test- tor manufacturer, its team has special insight into the changing ing capabilities, for its own lighting and connectivity systems, needs of its customers. BIRNS used that acumen to develop but also serving as an independent testing resource for many an elegant solution in 1997, the popular BIRNS Millennium subsea companies. The company has a custom electrical test connector series, a 6km-rated high density dry-mate connector system which permits the simultaneous testing of 16 circuits range, to add to its suite of connector lines that included the with up to 99 programmable test sequences at voltages up to

BIRNS Primum, a robust electrical 6km-rated series, and the 10kV, in addition to a high voltage test system that allows si-

BIRNS Polymeric series. Con? gurations of the BIRNS Mil- multaneous testing of 64 circuits at voltages up to 2100 VDC lennium series include high and low voltage, coax, ? ber-optic, and 1200 VAC. In 2019, BIRNS developed new custom titani- and hybrids of electro-coax, electro-optical and electro-opto- um cable assemblies for an extreme cold, extreme depth rated mechanical formats. The company launched revolutionary AUV, and along with them a new extreme cold/hydrostatic test coax contacts for the BIRNS Millennium series in 2015 that system that successfully allowed 48 hour+ continuous testing are open face pressure rated to 1433m. In 1997, BIRNS started of connectors and cable assemblies at 6km in a highly con- developing its line of penetrators—which has since evolved to trolled 2°C (±1°C) environment. drones so that manned vessels are no vey in shallow waters as well as in deep longer needed and battery recharg- and ultra-deep waters, operating a wide ing can be done in the water, avoiding variety of payloads ranging from more launch and recovery operations. conventional types such as side-scan uSEA’s system is called uLARS for sonar and multibeam echosounders to uSEA underwater drones, says uSEA CEO more advanced such as synthetic aper-

ing a hybrid system to disrupt exist- The system includes a submersible uSEA is looking for partners to com- ing manned vessel supported subsea towing head, with an inductive con- plete the quali? cation program, which operations via a subsea and surface nector for charging and data transfer, is expected by the end of 2020. After drone combination. uSEA was founded which acts a little like an in-air refuel- that, the company is targeting opera- in 2017 and since then it has been de- ing of ? ghter jets. tions in the sea and it’s looking for pilot veloping a USV to support underwater The system will support subsea sur- projects to perform in 2021.