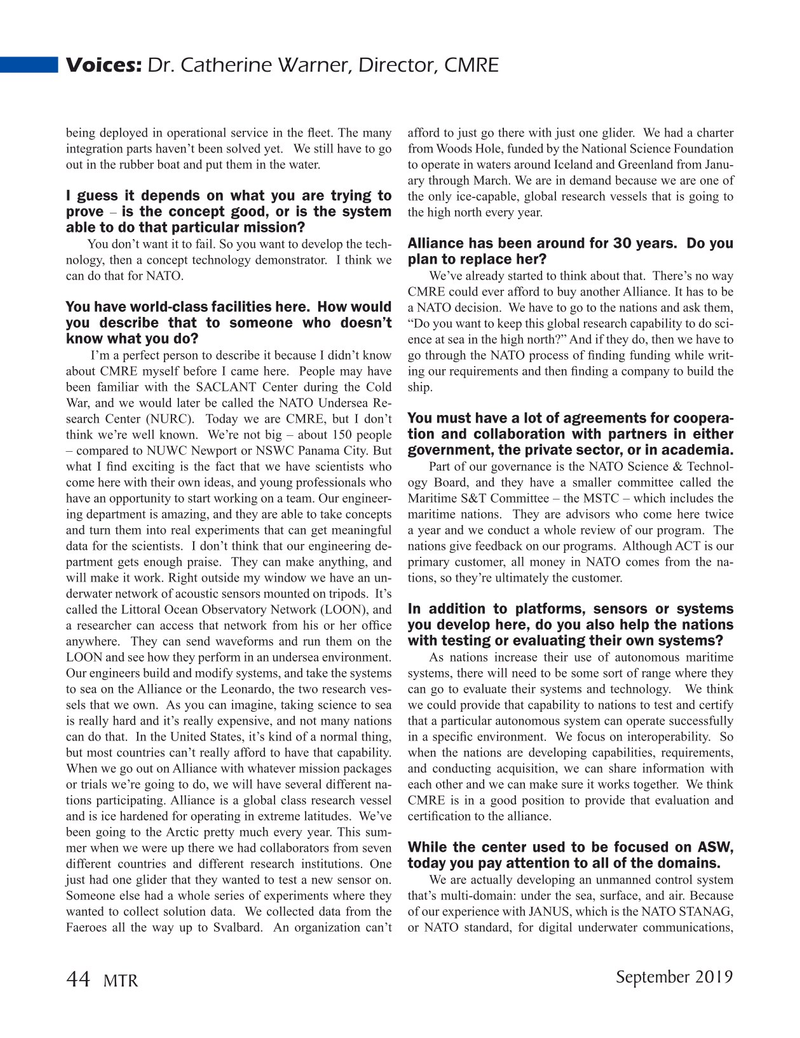 Voices: Dr. Catherine Warner, Director, CMRE being deployed in operational service in the ? eet. The many afford to just go there with just one glider. We had a charter integration parts haven’t been solved yet. We still have to go from Woods Hole, funded by the National Science Foundation out in the rubber boat and put them in the water. to operate in waters around Iceland and Greenland from Janu- ary through March. We are in demand because we are one of

I guess it depends on what you are trying to the only ice-capable, global research vessels that is going to prove is the concept good, or is the system – the high north every year.

able to do that particular mission?

You don’t want it to fail. So you want to develop the tech- Alliance has been around for 30 years. Do you nology, then a concept technology demonstrator. I think we plan to replace her?

can do that for NATO. We’ve already started to think about that. There’s no way

CMRE could ever afford to buy another Alliance. It has to be

You have world-class facilities here. How would a NATO decision. We have to go to the nations and ask them, you describe that to someone who doesn’t “Do you want to keep this global research capability to do sci- know what you do? ence at sea in the high north?” And if they do, then we have to I’m a perfect person to describe it because I didn’t know go through the NATO process of ? nding funding while writ- about CMRE myself before I came here. People may have ing our requirements and then ? nding a company to build the been familiar with the SACLANT Center during the Cold ship.

War, and we would later be called the NATO Undersea Re-

You must have a lot of agreements for coopera- search Center (NURC). Today we are CMRE, but I don’t tion and collaboration with partners in either think we’re well known. We’re not big – about 150 people government, the private sector, or in academia.

– compared to NUWC Newport or NSWC Panama City. But what I ? nd exciting is the fact that we have scientists who Part of our governance is the NATO Science & Technol- come here with their own ideas, and young professionals who ogy Board, and they have a smaller committee called the have an opportunity to start working on a team. Our engineer- Maritime S&T Committee – the MSTC – which includes the ing department is amazing, and they are able to take concepts maritime nations. They are advisors who come here twice and turn them into real experiments that can get meaningful a year and we conduct a whole review of our program. The data for the scientists. I don’t think that our engineering de- nations give feedback on our programs. Although ACT is our partment gets enough praise. They can make anything, and primary customer, all money in NATO comes from the na- will make it work. Right outside my window we have an un- tions, so they’re ultimately the customer. derwater network of acoustic sensors mounted on tripods. It’s

In addition to platforms, sensors or systems called the Littoral Ocean Observatory Network (LOON), and you develop here, do you also help the nations a researcher can access that network from his or her of? ce anywhere. They can send waveforms and run them on the with testing or evaluating their own systems?

LOON and see how they perform in an undersea environment. As nations increase their use of autonomous maritime

Our engineers build and modify systems, and take the systems systems, there will need to be some sort of range where they to sea on the Alliance or the Leonardo, the two research ves- can go to evaluate their systems and technology. We think sels that we own. As you can imagine, taking science to sea we could provide that capability to nations to test and certify is really hard and it’s really expensive, and not many nations that a particular autonomous system can operate successfully can do that. In the United States, it’s kind of a normal thing, in a speci? c environment. We focus on interoperability. So but most countries can’t really afford to have that capability. when the nations are developing capabilities, requirements,

When we go out on Alliance with whatever mission packages and conducting acquisition, we can share information with or trials we’re going to do, we will have several different na- each other and we can make sure it works together. We think tions participating. Alliance is a global class research vessel CMRE is in a good position to provide that evaluation and and is ice hardened for operating in extreme latitudes. We’ve certi? cation to the alliance.

been going to the Arctic pretty much every year. This sum-

While the center used to be focused on ASW, mer when we were up there we had collaborators from seven today you pay attention to all of the domains.

different countries and different research institutions. One just had one glider that they wanted to test a new sensor on. We are actually developing an unmanned control system

Someone else had a whole series of experiments where they that’s multi-domain: under the sea, surface, and air. Because wanted to collect solution data. We collected data from the of our experience with JANUS, which is the NATO STANAG,

Faeroes all the way up to Svalbard. An organization can’t or NATO standard, for digital underwater communications,