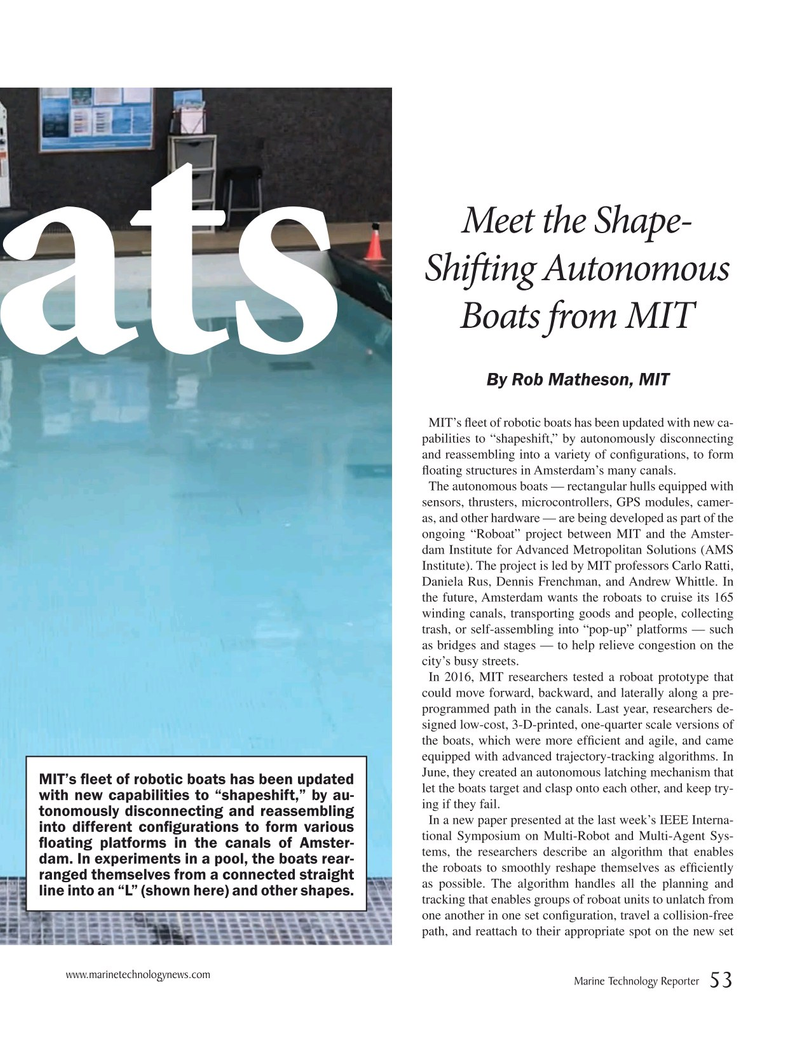 MIT’s ? eet of robotic boats has been updated with new ca- pabilities to “shapeshift,” by autonomously disconnecting and reassembling into a variety of con? gurations, to form ? oating structures in Amsterdam’s many canals.

The autonomous boats — rectangular hulls equipped with sensors, thrusters, microcontrollers, GPS modules, camer- as, and other hardware — are being developed as part of the ongoing “Roboat” project between MIT and the Amster- dam Institute for Advanced Metropolitan Solutions (AMS

Institute). The project is led by MIT professors Carlo Ratti,

Daniela Rus, Dennis Frenchman, and Andrew Whittle. In the future, Amsterdam wants the roboats to cruise its 165 winding canals, transporting goods and people, collecting trash, or self-assembling into “pop-up” platforms — such as bridges and stages — to help relieve congestion on the city’s busy streets.

In 2016, MIT researchers tested a roboat prototype that could move forward, backward, and laterally along a pre- programmed path in the canals. Last year, researchers de- signed low-cost, 3-D-printed, one-quarter scale versions of the boats, which were more ef? cient and agile, and came equipped with advanced trajectory-tracking algorithms. In

June, they created an autonomous latching mechanism that

MIT’s ? eet of robotic boats has been updated let the boats target and clasp onto each other, and keep try- with new capabilities to “shapeshift,” by au- ing if they fail.

In a new paper presented at the last week’s IEEE Interna- into different con? gurations to form various tional Symposium on Multi-Robot and Multi-Agent Sys- ? oating platforms in the canals of Amster- tems, the researchers describe an algorithm that enables dam. In experiments in a pool, the boats rear- the roboats to smoothly reshape themselves as ef? ciently ranged themselves from a connected straight as possible. The algorithm handles all the planning and line into an “L” (shown here) and other shapes.

tracking that enables groups of roboat units to unlatch from one another in one set con? guration, travel a collision-free path, and reattach to their appropriate spot on the new set www.marinetechnologynews.com