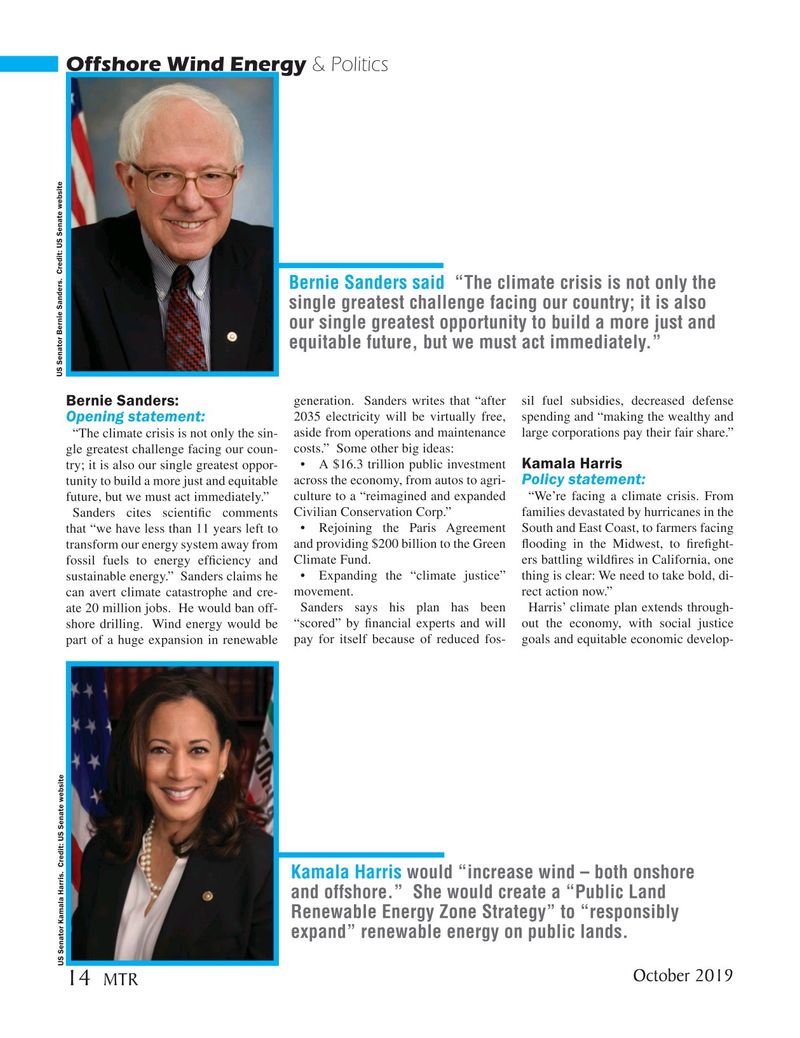 Bernie Sanders said “The climate crisis is not only the single greatest challenge facing our country; it is also our single greatest opportunity to build a more just and equitable future, but we must act immediately.”

Bernie Sanders: 2035 electricity will be virtually free, spending and “making the wealthy and

Opening statement: “The climate crisis is not only the sin- aside from operations and maintenance large corporations pay their fair share.” gle greatest challenge facing our coun- costs.” Some other big ideas:

Policy statement: tunity to build a more just and equitable across the economy, from autos to agri- future, but we must act immediately.” culture to a “reimagined and expanded “We’re facing a climate crisis. From

Sanders cites scienti? c comments Civilian Conservation Corp.” families devastated by hurricanes in the that “we have less than 11 years left to • Rejoining the Paris Agreement South and East Coast, to farmers facing transform our energy system away from and providing $200 billion to the Green ? ooding in the Midwest, to ? re? ght- fossil fuels to energy ef? ciency and Climate Fund. ers battling wild? res in California, one sustainable energy.” Sanders claims he • Expanding the “climate justice” thing is clear: We need to take bold, di- can avert climate catastrophe and cre- movement. rect action now.” ate 20 million jobs. He would ban off- Sanders says his plan has been Harris’ climate plan extends through- shore drilling. Wind energy would be “scored” by ? nancial experts and will out the economy, with social justice part of a huge expansion in renewable pay for itself because of reduced fos- goals and equitable economic develop-

Kamala Harris would “increase wind – both onshore and offshore.” She would create a “Public Land