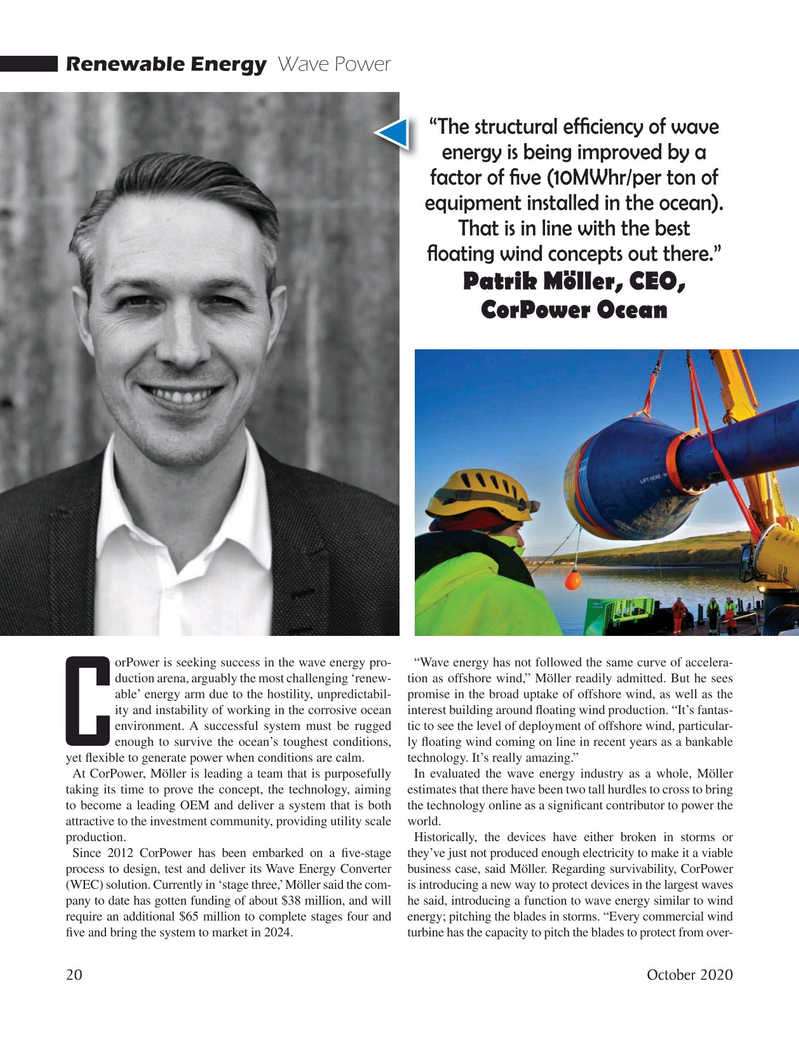 Renewable Energy Wave Power “The structural ef? ciency of wave energy is being improved by a factor of ? ve (10MWhr/per ton of equipment installed in the ocean).

That is in line with the best ? oating wind concepts out there.”

CorPower Ocean orPower is seeking success in the wave energy pro- “Wave energy has not followed the same curve of accelera- duction arena, arguably the most challenging ‘renew- tion as offshore wind,” Möller readily admitted. But he sees able’ energy arm due to the hostility, unpredictabil- promise in the broad uptake of offshore wind, as well as the ity and instability of working in the corrosive ocean interest building around ? oating wind production. “It’s fantas- environment. A successful system must be rugged tic to see the level of deployment of offshore wind, particular- enough to survive the ocean’s toughest conditions, ly ? oating wind coming on line in recent years as a bankable

At CorPower, Möller is leading a team that is purposefully In evaluated the wave energy industry as a whole, Möller taking its time to prove the concept, the technology, aiming estimates that there have been two tall hurdles to cross to bring to become a leading OEM and deliver a system that is both the technology online as a signi? cant contributor to power the attractive to the investment community, providing utility scale world.

production. Historically, the devices have either broken in storms or

Since 2012 CorPower has been embarked on a ? ve-stage they’ve just not produced enough electricity to make it a viable process to design, test and deliver its Wave Energy Converter business case, said Möller. Regarding survivability, CorPower (WEC) solution. Currently in ‘stage three,’ Möller said the com- is introducing a new way to protect devices in the largest waves pany to date has gotten funding of about $38 million, and will he said, introducing a function to wave energy similar to wind require an additional $65 million to complete stages four and energy; pitching the blades in storms. “Every commercial wind ? ve and bring the system to market in 2024. turbine has the capacity to pitch the blades to protect from over- 20 October 2020