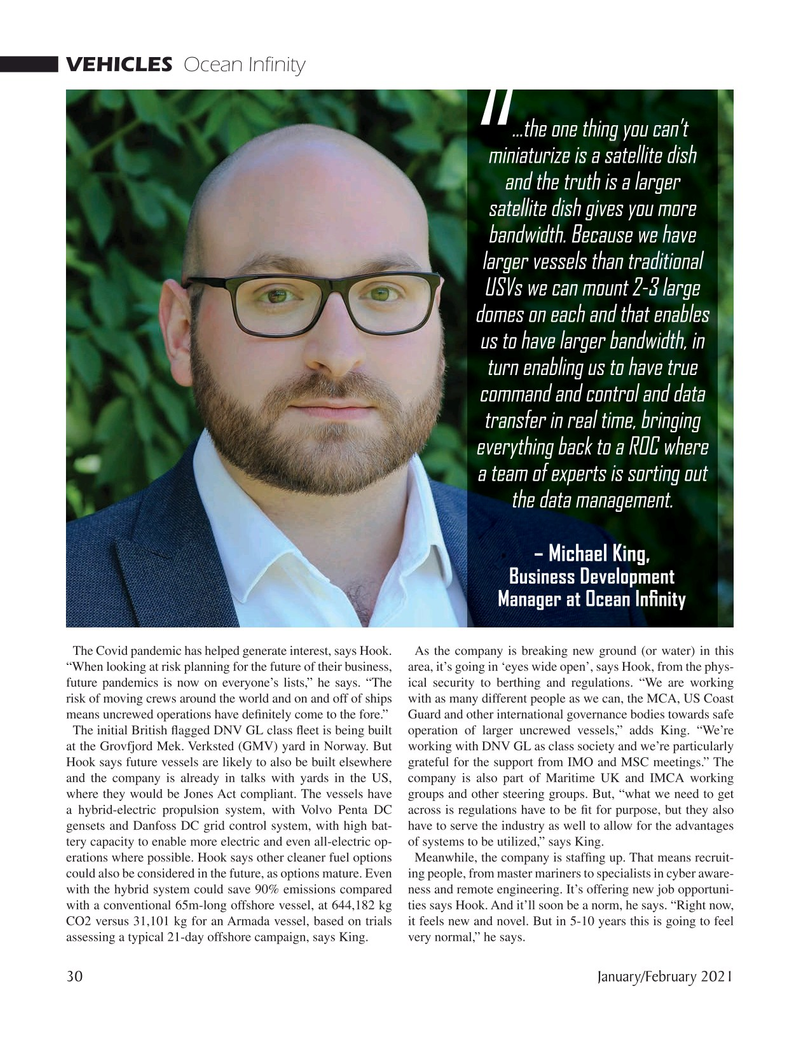 VEHICLES Ocean Infinity ...the one thing you can’t miniaturize is a satellite dish and the truth is a larger satellite dish gives you more bandwidth. Because we have larger vessels than traditional

USVs we can mount 2-3 large domes on each and that enables us to have larger bandwidth, in turn enabling us to have true command and control and data transfer in real time, bringing everything back to a ROC where a team of experts is sorting out the data management. – Michael King,

Manager at Ocean In? nity

The Covid pandemic has helped generate interest, says Hook. As the company is breaking new ground (or water) in this “When looking at risk planning for the future of their business, area, it’s going in ‘eyes wide open’, says Hook, from the phys- future pandemics is now on everyone’s lists,” he says. “The ical security to berthing and regulations. “We are working risk of moving crews around the world and on and off of ships with as many different people as we can, the MCA, US Coast means uncrewed operations have de? nitely come to the fore.” Guard and other international governance bodies towards safe

Hook says future vessels are likely to also be built elsewhere grateful for the support from IMO and MSC meetings.” The and the company is already in talks with yards in the US, company is also part of Maritime UK and IMCA working where they would be Jones Act compliant. The vessels have groups and other steering groups. But, “what we need to get a hybrid-electric propulsion system, with Volvo Penta DC across is regulations have to be ? t for purpose, but they also gensets and Danfoss DC grid control system, with high bat- have to serve the industry as well to allow for the advantages tery capacity to enable more electric and even all-electric op- of systems to be utilized,” says King.

erations where possible. Hook says other cleaner fuel options Meanwhile, the company is staf? ng up. That means recruit- could also be considered in the future, as options mature. Even ing people, from master mariners to specialists in cyber aware- with the hybrid system could save 90% emissions compared ness and remote engineering. It’s offering new job opportuni- with a conventional 65m-long offshore vessel, at 644,182 kg ties says Hook. And it’ll soon be a norm, he says. “Right now,

CO2 versus 31,101 kg for an Armada vessel, based on trials it feels new and novel. But in 5-10 years this is going to feel assessing a typical 21-day offshore campaign, says King. very normal,” he says.