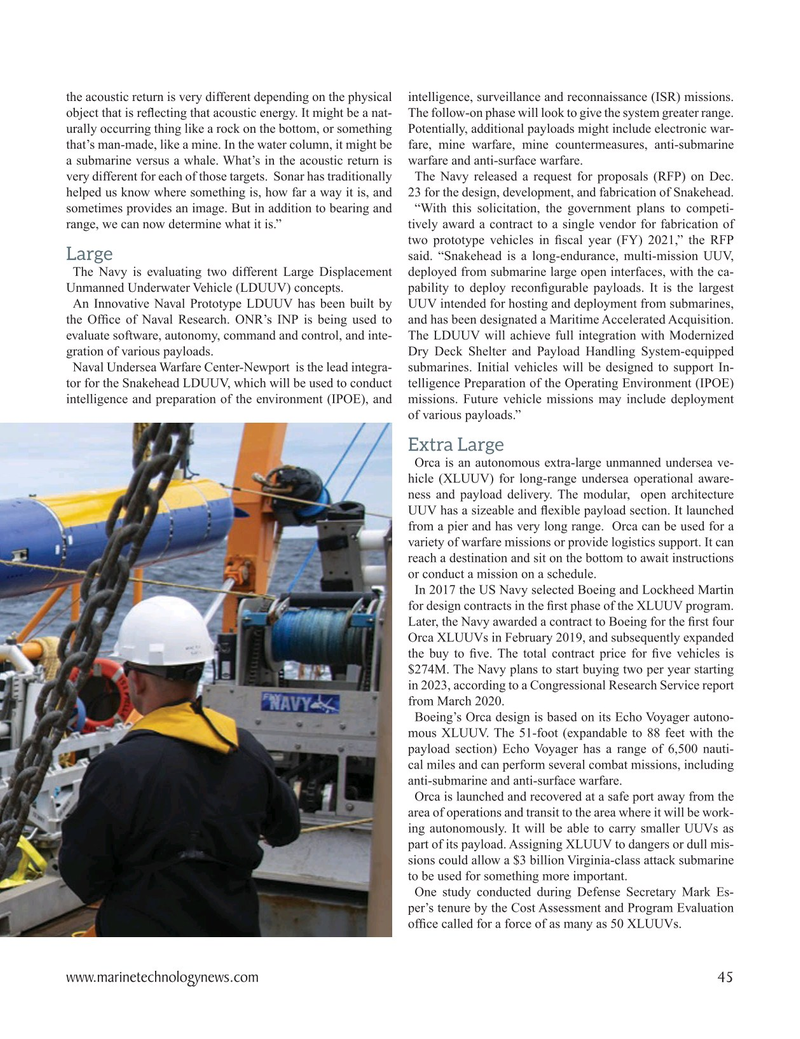 the acoustic return is very different depending on the physical intelligence, surveillance and reconnaissance (ISR) missions. object that is re? ecting that acoustic energy. It might be a nat- The follow-on phase will look to give the system greater range. urally occurring thing like a rock on the bottom, or something Potentially, additional payloads might include electronic war- that’s man-made, like a mine. In the water column, it might be fare, mine warfare, mine countermeasures, anti-submarine a submarine versus a whale. What’s in the acoustic return is warfare and anti-surface warfare.

very different for each of those targets. Sonar has traditionally The Navy released a request for proposals (RFP) on Dec. helped us know where something is, how far a way it is, and 23 for the design, development, and fabrication of Snakehead.

sometimes provides an image. But in addition to bearing and “With this solicitation, the government plans to competi- range, we can now determine what it is.” tively award a contract to a single vendor for fabrication of two prototype vehicles in ? scal year (FY) 2021,” the RFP

An Innovative Naval Prototype LDUUV has been built by UUV intended for hosting and deployment from submarines, the Of? ce of Naval Research. ONR’s INP is being used to and has been designated a Maritime Accelerated Acquisition. evaluate software, autonomy, command and control, and inte- The LDUUV will achieve full integration with Modernized gration of various payloads. Dry Deck Shelter and Payload Handling System-equipped

Naval Undersea Warfare Center-Newport is the lead integra- submarines. Initial vehicles will be designed to support In- tor for the Snakehead LDUUV, which will be used to conduct telligence Preparation of the Operating Environment (IPOE) intelligence and preparation of the environment (IPOE), and missions. Future vehicle missions may include deployment of various payloads.”

UUV has a sizeable and ? exible payload section. It launched from a pier and has very long range. Orca can be used for a variety of warfare missions or provide logistics support. It can reach a destination and sit on the bottom to await instructions or conduct a mission on a schedule.

In 2017 the US Navy selected Boeing and Lockheed Martin for design contracts in the ? rst phase of the XLUUV program.

Later, the Navy awarded a contract to Boeing for the ? rst four

Orca XLUUVs in February 2019, and subsequently expanded the buy to ? ve. The total contract price for ? ve vehicles is $274M. The Navy plans to start buying two per year starting in 2023, according to a Congressional Research Service report from March 2020.

Boeing’s Orca design is based on its Echo Voyager autono- mous XLUUV. The 51-foot (expandable to 88 feet with the payload section) Echo Voyager has a range of 6,500 nauti- cal miles and can perform several combat missions, including anti-submarine and anti-surface warfare.

Orca is launched and recovered at a safe port away from the area of operations and transit to the area where it will be work- ing autonomously. It will be able to carry smaller UUVs as part of its payload. Assigning XLUUV to dangers or dull mis- sions could allow a $3 billion Virginia-class attack submarine to be used for something more important.

One study conducted during Defense Secretary Mark Es- per’s tenure by the Cost Assessment and Program Evaluation of? ce called for a force of as many as 50 XLUUVs.