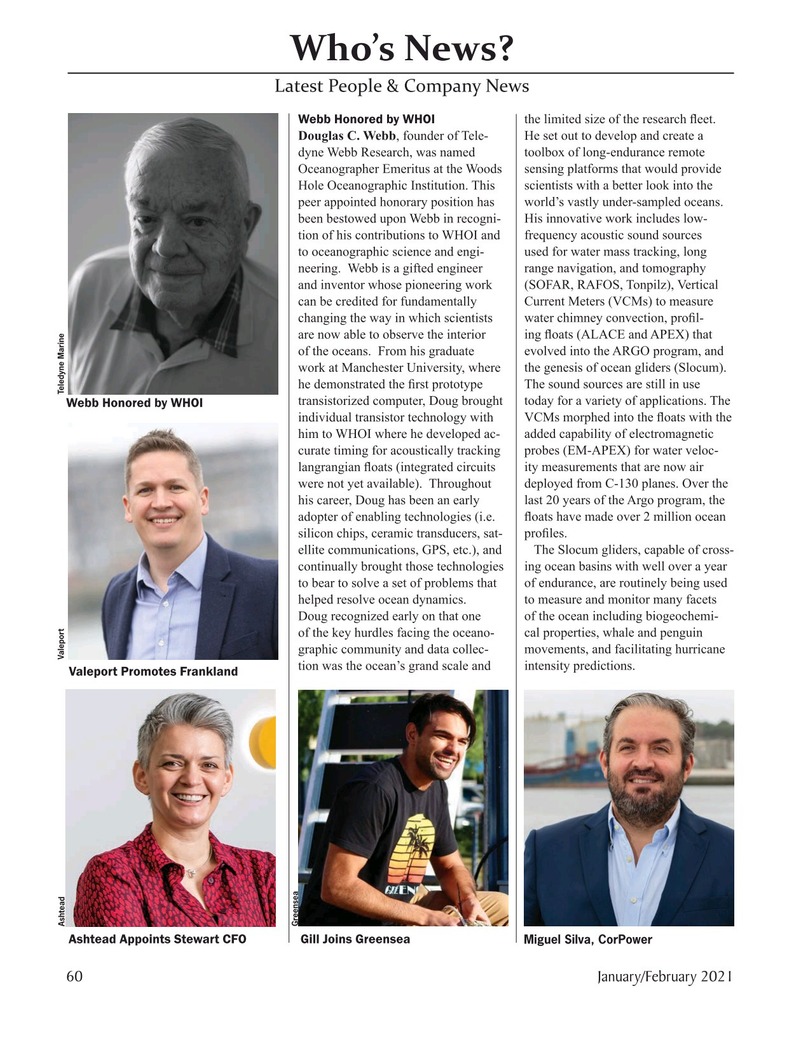 Webb Honored by WHOI the limited size of the research ? eet.

Douglas C. Webb, founder of Tele- He set out to develop and create a dyne Webb Research, was named toolbox of long-endurance remote

Oceanographer Emeritus at the Woods sensing platforms that would provide

Hole Oceanographic Institution. This scientists with a better look into the peer appointed honorary position has world’s vastly under-sampled oceans. been bestowed upon Webb in recogni- His innovative work includes low- tion of his contributions to WHOI and frequency acoustic sound sources to oceanographic science and engi- used for water mass tracking, long neering. Webb is a gifted engineer range navigation, and tomography and inventor whose pioneering work (SOFAR, RAFOS, Tonpilz), Vertical can be credited for fundamentally Current Meters (VCMs) to measure changing the way in which scientists water chimney convection, pro? l- are now able to observe the interior ing ? oats (ALACE and APEX) that of the oceans. From his graduate evolved into the ARGO program, and work at Manchester University, where the genesis of ocean gliders (Slocum). he demonstrated the ? rst prototype The sound sources are still in use transistorized computer, Doug brought today for a variety of applications. The

Webb Honored by WHOI individual transistor technology with VCMs morphed into the ? oats with the him to WHOI where he developed ac- added capability of electromagnetic curate timing for acoustically tracking probes (EM-APEX) for water veloc- langrangian ? oats (integrated circuits ity measurements that are now air were not yet available). Throughout deployed from C-130 planes. Over the his career, Doug has been an early last 20 years of the Argo program, the adopter of enabling technologies (i.e. ? oats have made over 2 million ocean silicon chips, ceramic transducers, sat- pro? les. ellite communications, GPS, etc.), and The Slocum gliders, capable of cross- continually brought those technologies ing ocean basins with well over a year to bear to solve a set of problems that of endurance, are routinely being used helped resolve ocean dynamics. to measure and monitor many facets

Doug recognized early on that one of the ocean including biogeochemi- of the key hurdles facing the oceano- cal properties, whale and penguin graphic community and data collec- movements, and facilitating hurricane tion was the ocean’s grand scale and intensity predictions.