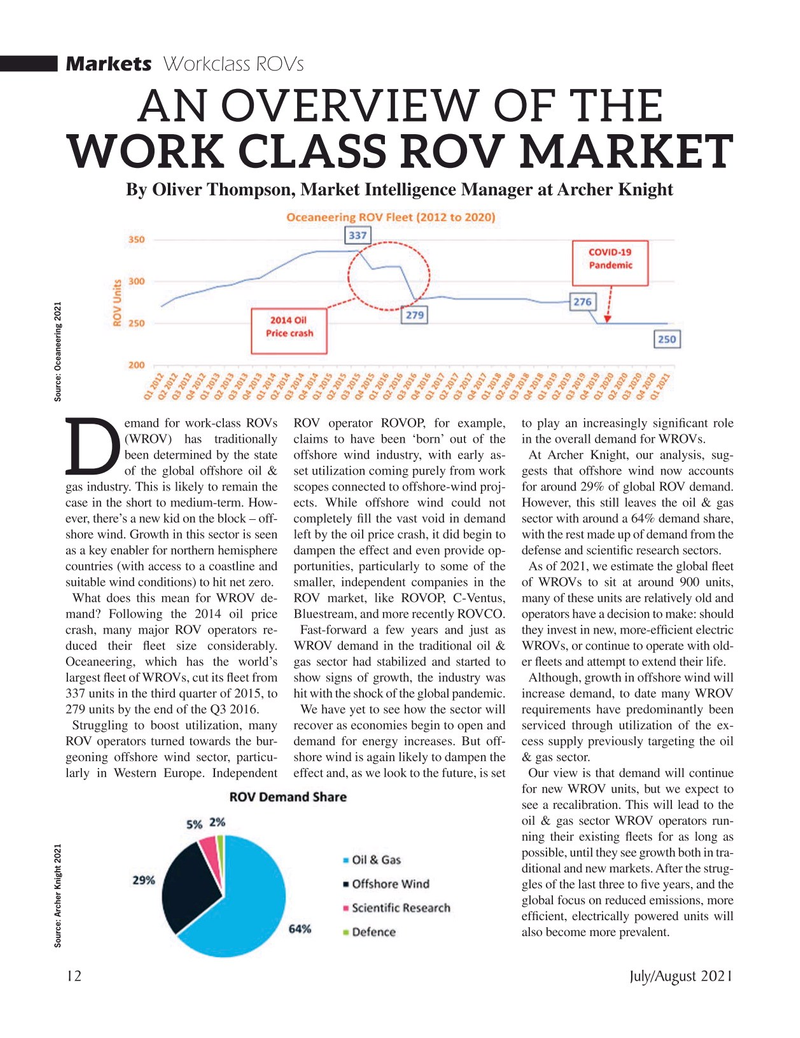 AN OVERVIEW OF THE

By Oliver Thompson, Market Intelligence Manager at Archer Knight emand for work-class ROVs ROV operator ROVOP, for example, to play an increasingly signi? cant role (WROV) has traditionally claims to have been ‘born’ out of the in the overall demand for WROVs. been determined by the state offshore wind industry, with early as- At Archer Knight, our analysis, sug-

D of the global offshore oil & set utilization coming purely from work gests that offshore wind now accounts gas industry. This is likely to remain the scopes connected to offshore-wind proj- for around 29% of global ROV demand. case in the short to medium-term. How- ects. While offshore wind could not However, this still leaves the oil & gas ever, there’s a new kid on the block – off- completely ? ll the vast void in demand sector with around a 64% demand share, shore wind. Growth in this sector is seen left by the oil price crash, it did begin to with the rest made up of demand from the as a key enabler for northern hemisphere dampen the effect and even provide op- defense and scienti? c research sectors. countries (with access to a coastline and portunities, particularly to some of the As of 2021, we estimate the global ? eet suitable wind conditions) to hit net zero. smaller, independent companies in the of WROVs to sit at around 900 units,

What does this mean for WROV de- ROV market, like ROVOP, C-Ventus, many of these units are relatively old and mand? Following the 2014 oil price Bluestream, and more recently ROVCO. operators have a decision to make: should crash, many major ROV operators re- Fast-forward a few years and just as they invest in new, more-ef? cient electric duced their ? eet size considerably. WROV demand in the traditional oil & WROVs, or continue to operate with old-

Oceaneering, which has the world’s gas sector had stabilized and started to er ? eets and attempt to extend their life. largest ? eet of WROVs, cut its ? eet from show signs of growth, the industry was Although, growth in offshore wind will 337 units in the third quarter of 2015, to hit with the shock of the global pandemic. increase demand, to date many WROV 279 units by the end of the Q3 2016. We have yet to see how the sector will requirements have predominantly been

Struggling to boost utilization, many recover as economies begin to open and serviced through utilization of the ex-

ROV operators turned towards the bur- demand for energy increases. But off- cess supply previously targeting the oil geoning offshore wind sector, particu- shore wind is again likely to dampen the & gas sector. larly in Western Europe. Independent effect and, as we look to the future, is set Our view is that demand will continue for new WROV units, but we expect to see a recalibration. This will lead to the oil & gas sector WROV operators run- ning their existing ? eets for as long as possible, until they see growth both in tra- ditional and new markets. After the strug- gles of the last three to ? ve years, and the global focus on reduced emissions, more ef? cient, electrically powered units will also become more prevalent.