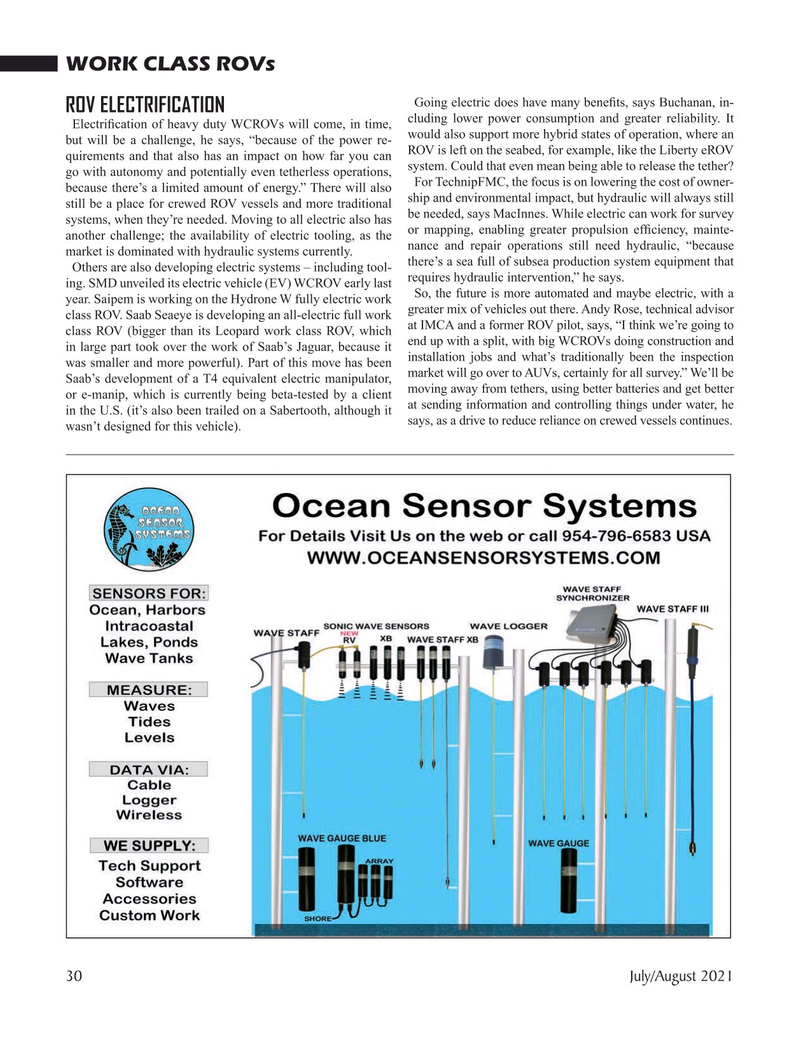 Going electric does have many bene? ts, says Buchanan, in-

Electri? cation of heavy duty WCROVs will come, in time, cluding lower power consumption and greater reliability. It would also support more hybrid states of operation, where an but will be a challenge, he says, “because of the power re- quirements and that also has an impact on how far you can ROV is left on the seabed, for example, like the Liberty eROV system. Could that even mean being able to release the tether?

go with autonomy and potentially even tetherless operations,

For TechnipFMC, the focus is on lowering the cost of owner- because there’s a limited amount of energy.” There will also still be a place for crewed ROV vessels and more traditional ship and environmental impact, but hydraulic will always still be needed, says MacInnes. While electric can work for survey systems, when they’re needed. Moving to all electric also has another challenge; the availability of electric tooling, as the or mapping, enabling greater propulsion ef? ciency, mainte- nance and repair operations still need hydraulic, “because market is dominated with hydraulic systems currently. there’s a sea full of subsea production system equipment that

So, the future is more automated and maybe electric, with a year. Saipem is working on the Hydrone W fully electric work greater mix of vehicles out there. Andy Rose, technical advisor class ROV. Saab Seaeye is developing an all-electric full work class ROV (bigger than its Leopard work class ROV, which at IMCA and a former ROV pilot, says, “I think we’re going to in large part took over the work of Saab’s Jaguar, because it end up with a split, with big WCROVs doing construction and was smaller and more powerful). Part of this move has been installation jobs and what’s traditionally been the inspection

Saab’s development of a T4 equivalent electric manipulator, market will go over to AUVs, certainly for all survey.” We’ll be or e-manip, which is currently being beta-tested by a client moving away from tethers, using better batteries and get better at sending information and controlling things under water, he in the U.S. (it’s also been trailed on a Sabertooth, although it says, as a drive to reduce reliance on crewed vessels continues. wasn’t designed for this vehicle). 30 July/August 2021