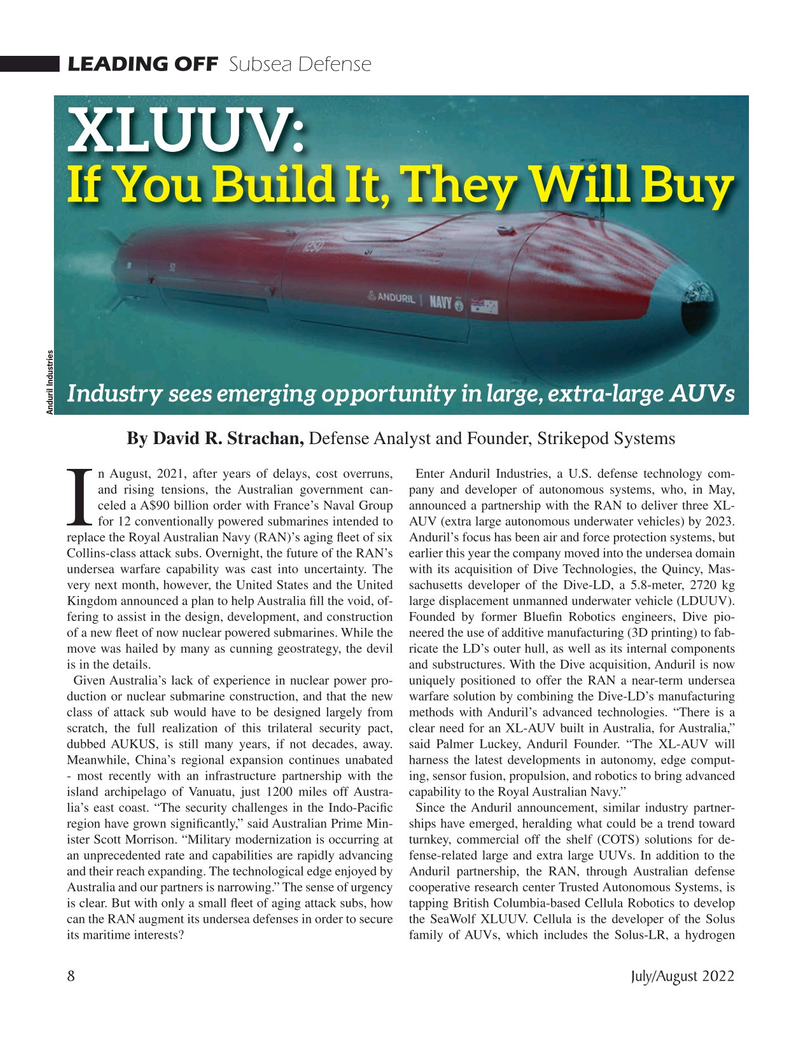 If You Build It, They Will Buy

By David R. Strachan, Defense Analyst and Founder, Strikepod Systems n August, 2021, after years of delays, cost overruns, Enter Anduril Industries, a U.S. defense technology com- and rising tensions, the Australian government can- pany and developer of autonomous systems, who, in May, celed a A$90 billion order with France’s Naval Group announced a partnership with the RAN to deliver three XL-

Collins-class attack subs. Overnight, the future of the RAN’s earlier this year the company moved into the undersea domain undersea warfare capability was cast into uncertainty. The with its acquisition of Dive Technologies, the Quincy, Mas- very next month, however, the United States and the United sachusetts developer of the Dive-LD, a 5.8-meter, 2720 kg

Kingdom announced a plan to help Australia ? ll the void, of- large displacement unmanned underwater vehicle (LDUUV). fering to assist in the design, development, and construction Founded by former Blue? n Robotics engineers, Dive pio- of a new ? eet of now nuclear powered submarines. While the neered the use of additive manufacturing (3D printing) to fab- move was hailed by many as cunning geostrategy, the devil ricate the LD’s outer hull, as well as its internal components is in the details. and substructures. With the Dive acquisition, Anduril is now

Given Australia’s lack of experience in nuclear power pro- uniquely positioned to offer the RAN a near-term undersea duction or nuclear submarine construction, and that the new warfare solution by combining the Dive-LD’s manufacturing class of attack sub would have to be designed largely from methods with Anduril’s advanced technologies. “There is a scratch, the full realization of this trilateral security pact, clear need for an XL-AUV built in Australia, for Australia,” dubbed AUKUS, is still many years, if not decades, away. said Palmer Luckey, Anduril Founder. “The XL-AUV will

Meanwhile, China’s regional expansion continues unabated harness the latest developments in autonomy, edge comput- - most recently with an infrastructure partnership with the ing, sensor fusion, propulsion, and robotics to bring advanced island archipelago of Vanuatu, just 1200 miles off Austra- capability to the Royal Australian Navy.” lia’s east coast. “The security challenges in the Indo-Paci? c Since the Anduril announcement, similar industry partner- region have grown signi? cantly,” said Australian Prime Min- ships have emerged, heralding what could be a trend toward ister Scott Morrison. “Military modernization is occurring at turnkey, commercial off the shelf (COTS) solutions for de- an unprecedented rate and capabilities are rapidly advancing fense-related large and extra large UUVs. In addition to the and their reach expanding. The technological edge enjoyed by Anduril partnership, the RAN, through Australian defense

Australia and our partners is narrowing.” The sense of urgency cooperative research center Trusted Autonomous Systems, is is clear. But with only a small ? eet of aging attack subs, how tapping British Columbia-based Cellula Robotics to develop can the RAN augment its undersea defenses in order to secure the SeaWolf XLUUV. Cellula is the developer of the Solus its maritime interests? family of AUVs, which includes the Solus-LR, a hydrogen 8 July/August 2022