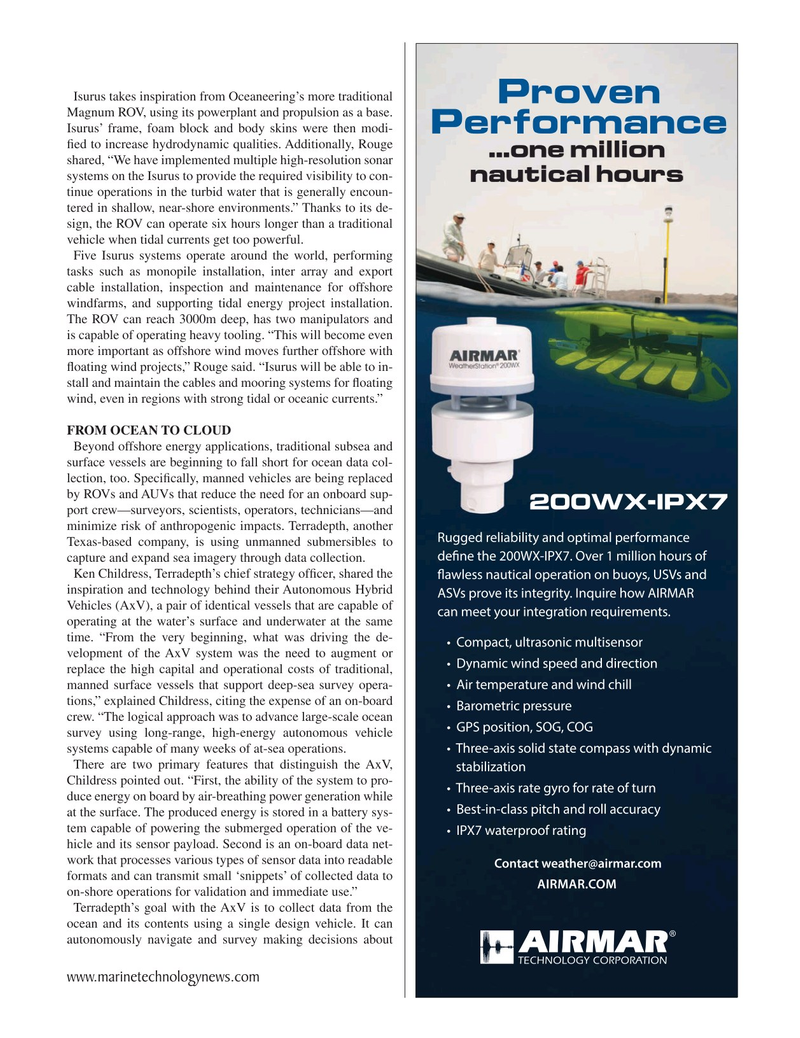 Magnum ROV, using its powerplant and propulsion as a base.

Isurus’ frame, foam block and body skins were then modi-

Performance ? ed to increase hydrodynamic qualities. Additionally, Rouge ...one million shared, “We have implemented multiple high-resolution sonar systems on the Isurus to provide the required visibility to con- nautical hours tinue operations in the turbid water that is generally encoun- tered in shallow, near-shore environments.” Thanks to its de- sign, the ROV can operate six hours longer than a traditional vehicle when tidal currents get too powerful.

The ROV can reach 3000m deep, has two manipulators and is capable of operating heavy tooling. “This will become even more important as offshore wind moves further offshore with ? oating wind projects,” Rouge said. “Isurus will be able to in- stall and maintain the cables and mooring systems for ? oating wind, even in regions with strong tidal or oceanic currents.”

FROM OCEAN TO CLOUD

Beyond offshore energy applications, traditional subsea and surface vessels are beginning to fall short for ocean data col- lection, too. Speci? cally, manned vehicles are being replaced by ROVs and AUVs that reduce the need for an onboard sup- 200WX-IPX7 port crew—surveyors, scientists, operators, technicians—and minimize risk of anthropogenic impacts. Terradepth, another

Texas-based company, is using unmanned submersibles to defne the 200WX-IPX7. Over 1 million hours of capture and expand sea imagery through data collection.

Ken Childress, Terradepth’s chief strategy of? cer, shared the fawless nautical operation on buoys, USVs and inspiration and technology behind their Autonomous Hybrid

Vehicles (AxV), a pair of identical vessels that are capable of can meet your integration requirements.

operating at the water’s surface and underwater at the same time. “From the very beginning, what was driving the de- • Compact, ultrasonic multisensor velopment of the AxV system was the need to augment or • Dynamic wind speed and direction replace the high capital and operational costs of traditional, manned surface vessels that support deep-sea survey opera- • Air temperature and wind chill tions,” explained Childress, citing the expense of an on-board • Barometric pressure crew. “The logical approach was to advance large-scale ocean • GPS position, SOG, COG survey using long-range, high-energy autonomous vehicle systems capable of many weeks of at-sea operations.

There are two primary features that distinguish the AxV, stabilization

Childress pointed out. “First, the ability of the system to pro- • Three-axis rate gyro for rate of turn duce energy on board by air-breathing power generation while • Best-in-class pitch and roll accuracy at the surface. The produced energy is stored in a battery sys- tem capable of powering the submerged operation of the ve- • IPX7 waterproof rating hicle and its sensor payload. Second is an on-board data net- work that processes various types of sensor data into readable

AIRMAR.COM on-shore operations for validation and immediate use.”

Terradepth’s goal with the AxV is to collect data from the ocean and its contents using a single design vehicle. It can autonomously navigate and survey making decisions about www.marinetechnologynews.com