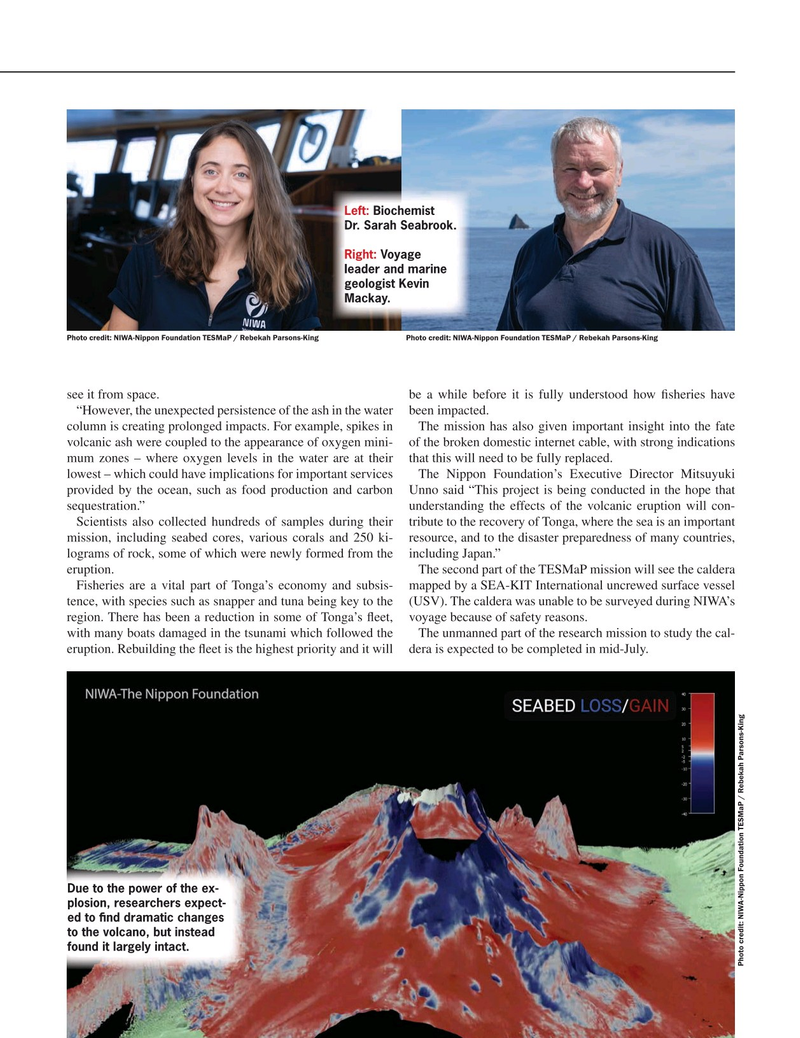 column is creating prolonged impacts. For example, spikes in The mission has also given important insight into the fate volcanic ash were coupled to the appearance of oxygen mini- of the broken domestic internet cable, with strong indications mum zones – where oxygen levels in the water are at their that this will need to be fully replaced.

lowest – which could have implications for important services The Nippon Foundation’s Executive Director Mitsuyuki provided by the ocean, such as food production and carbon Unno said “This project is being conducted in the hope that sequestration.” understanding the effects of the volcanic eruption will con-

Scientists also collected hundreds of samples during their tribute to the recovery of Tonga, where the sea is an important mission, including seabed cores, various corals and 250 ki- resource, and to the disaster preparedness of many countries, lograms of rock, some of which were newly formed from the including Japan.” eruption. The second part of the TESMaP mission will see the caldera

Fisheries are a vital part of Tonga’s economy and subsis- mapped by a SEA-KIT International uncrewed surface vessel tence, with species such as snapper and tuna being key to the (USV). The caldera was unable to be surveyed during NIWA’s region. There has been a reduction in some of Tonga’s ? eet, voyage because of safety reasons.

with many boats damaged in the tsunami which followed the The unmanned part of the research mission to study the cal- eruption. Rebuilding the ? eet is the highest priority and it will dera is expected to be completed in mid-July.

Due to the power of the ex- plosion, researchers expect- ed to ? nd dramatic changes to the volcano, but instead found it largely intact.