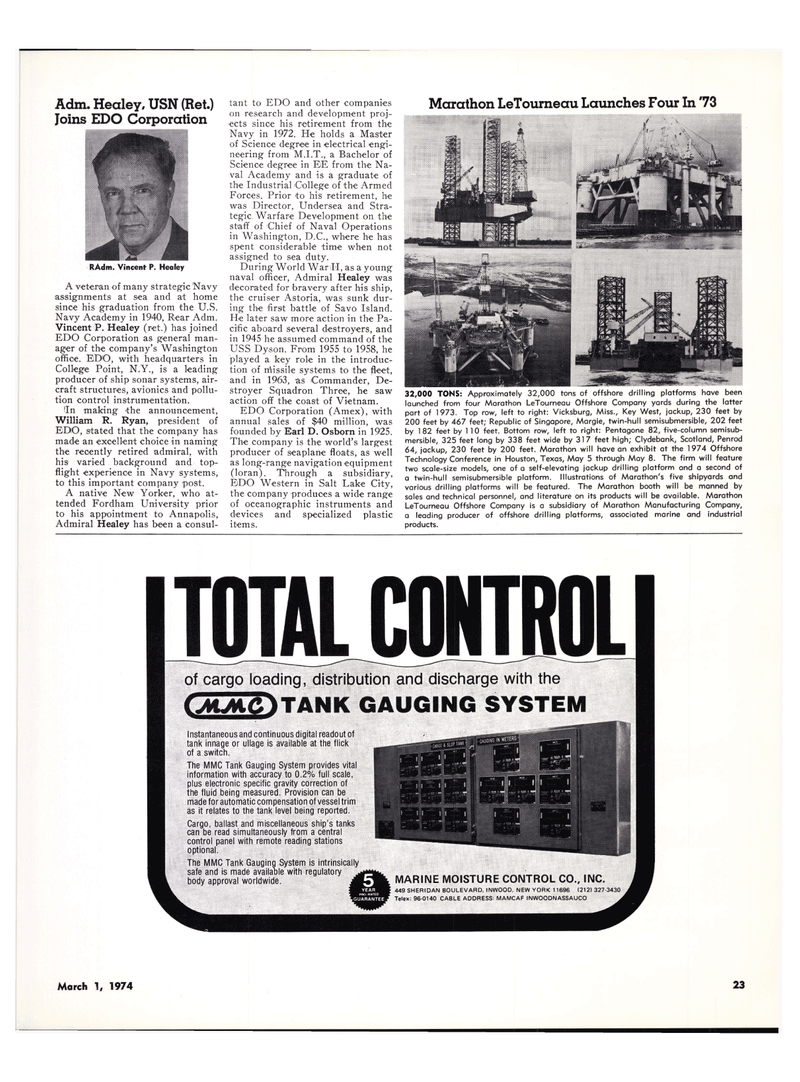 Navy in 1972. He holds a Master of Science degree in electrical engi- neering from M.I.T., a Bachelor of

Forces. Prior to his retirement, he was Director, Undersea and Stra- tegic Warfare Development on the staff of Chief of Naval Operations in Washington, D.C., where he has spent considerable time when not assigned to sea duty.

During World War II, as a young naval officer, Admiral Healey was decorated for bravery after his ship, the cruiser Astoria, was sunk dur- ing the first battle of Savo Island.

He later saw more action in the Pa- cific aboard several destroyers, and in 1945 he assumed command of the

USS Dyson. From 1955 to 1958, he played a key role in the introduc- tion of missile systems to the fleet, and in 1963, as Commander, De- stroyer Squadron Three, he saw action off the coast of Vietnam.

The company is the world's largest producer of seaplane floats, as well as long-range navigation equipment (loran). Through a subsidiary,

A veteran of many strategic Navy assignments at sea and at home since his graduation from the U.S.

EDO Corporation as general man- ager of the company's Washington office. EDO, with headquarters in

EDO, stated that the company has made an excellent choice in naming the recently retired admiral, with his varied background and top- flight experience in Navy systems, to this important company post.

A native New Yorker, who at- tended Fordham University prior to his appointment to Annapolis,

Admiral Healey has been a consul-

Technology Conference in Houston, Texas, May 5 through May 8. The firm will feature two scale-size models, one of a self-elevating jackup drilling platform and a second of a twin-hull semisubmersible platform. Illustrations of Marathon's five shipyards and various drilling platforms will be featured. The Marathon booth will be manned by sales and technical personnel, and literature on its products will be available. Marathon

TOTAL CONTROL of cargo loading, distribution and discharge with the (5i2tC)TANK GAUGING SYSTEM

Instantaneous and continuous digital readout of tank innage or ullage is available at the flick of a switch.

The MMC Tank Gauging System provides vital information with accuracy to 0.2% full scale, plus electronic specific gravity correction of the fluid being measured. Provision can be made for automatic compensation of vessel trim as it relates to the tank level being reported.

Cargo, ballast and miscellaneous ship's tanks can be read simultaneously from a central control panel with remote reading stations optional.