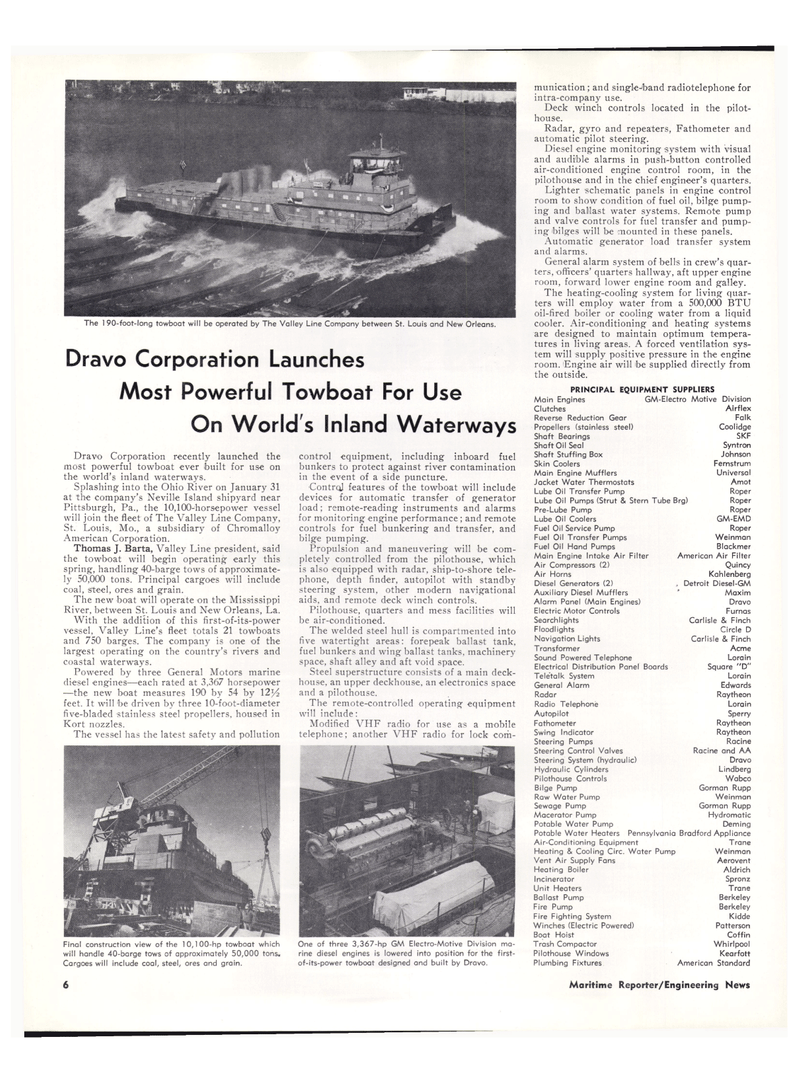 The 1 90-foot-long towboat will be operated by The Valley Line Company between St. Louis and New Orleans. munication ; and single-hand radiotelephone for intra-company use.

Diesel engine monitoring system with visual and audible alarms in push-button controlled air-conditioned engine control room, in the pilothouse and in the chief engineer's quarters.

The heating-cooling system for living quar- ters will employ water from a 500,000 BTU oil-fired boiler or cooling water from a liquid cooler. Air-conditioning and heating systems are designed to maintain optimum tempera- tures in living areas. A forced ventilation sys- tem will 'supply positive pressure in the engine room. Engine air will be supplied directly from the outside.

Most Powerful Towboat For Use

Dravo Corporation recently launched the most powerful towboat ever .built for use on the world's inland waterways.

Pittsburgh, Pa., the 10,100-horsepower vessel will join the fleet of The Valley Line Company,

The new boat will operate on the Mississippi

With the addition of this first-of-its-power vessel, Valley Line's fleet totals 21 towboats and 750 barges. The company is one of the largest operating on the country's rivers and coastal waterways.

Powered by three General Motors marine diesel engines—each rated at 3,367 horsepower —the new boat measures 190 by 54 by 12^4 feet. It will 'be driven by three 10-foot-diameter five-bladed stainless steel propellers, housed in

The vessel has the latest safety and pollution

Final construction view of the 10,100-hp towboat which will handle 40-barge tows of approximately 50,000 tons.

Cargoes will include coal, steel, ores and grain. control equipment, including inboard fuel bunkers to protect against river contamination in the event of a side puncture.

Control features of the towboat will include devices for automatic transfer of generator load; remote-reading instruments and alarms for monitoring engine performance ; and remote controls for fuel bunkering and transfer, and bilge pumping.

Propulsion and maneuvering will be com- pletely controlled from the pilothouse, which is also equipped with radar, ship-to-shore tele- phone, depth finder, autopilot with standby steering system, other modern navigational aids, and remote deck winch controls.

Pilothouse, quarters and mess facilities will be air-conditioned.

Steel superstructure consists of a main deck- house, an upper deckhouse, an electronics space and a pilothouse.

The remote-controlled operating equipment will include: