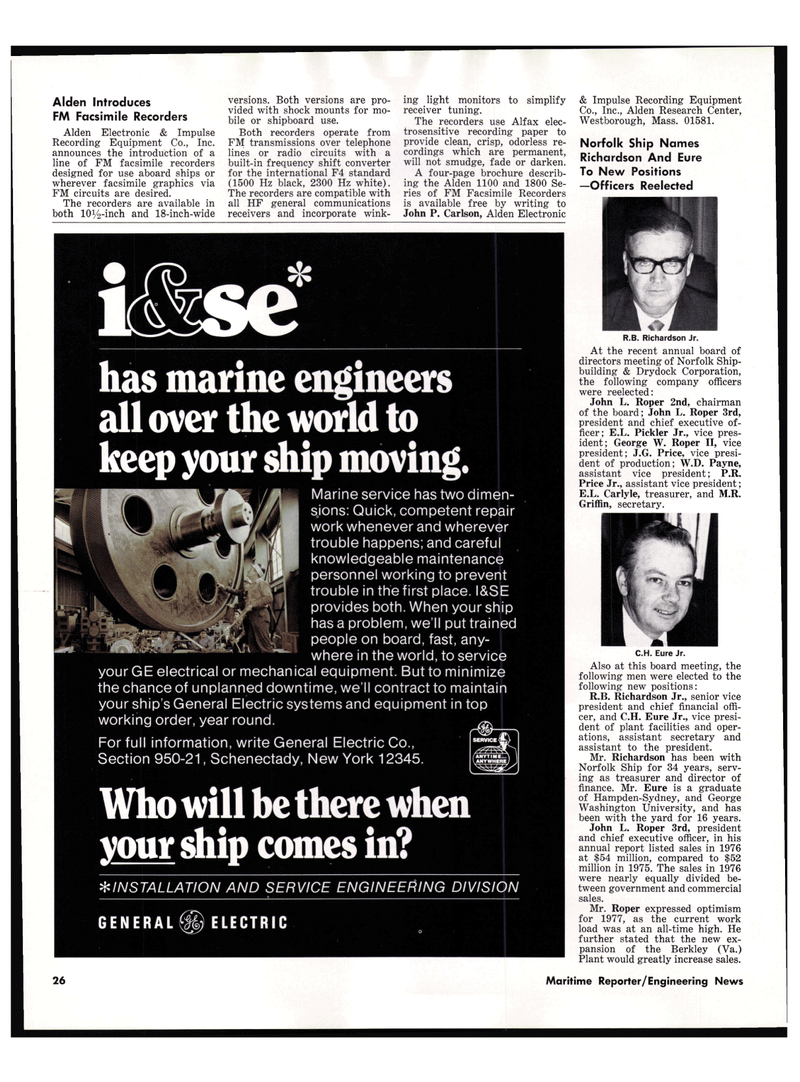 Recording Equipment Co., Inc. announces the introduction of a line of FM facsimile recorders designed for use aboard ships or wherever facsimile graphics via

The recorders are available in both lO^-inch and 18-inch-wide versions. Both versions are pro- vided with shock mounts for mo- bile or shipboard use.

Both recorders operate from

The recorders are compatible with all HF general communications receivers and incorporate wink- ing light monitors to simplify receiver tuning.

The recorders use Alfax elec- trosensitive recording paper to provide clean, crisp, odorless re- cordings which are permanent, will not smudge, fade or darken.

At the recent annual board of directors meeting of Norfolk Ship- building & Drydock Corporation, the following company officers were reelected:

Mr. Richardson has been with

Norfolk Ship for 34 years, serv- ing as treasurer and director of finance. Mr. Eure is a graduate of Hampden-Sydney, and George

Washington University, and has been with the yard for 16 years.

John L. Roper 3rd, president and chief executive officer, in his annual report listed sales in 1976 at $54 million, compared to $52 million in 1975. The sales in 1976 were nearly equally divided be- tween government and commercial sales.

Mr. Roper expressed optimism for 1977, as the current work load was at an all-time high. He further stated that the new ex- pansion of the Berkley (Va.)

Plant would greatly increase sales. iffise" has marine engineers all over the world to keep your ship moving. ^^^^^^^^^^^^^^^^ where in the world,toservice your GE electrical or mechanical equipment. But to minimize the chance of unplanned downtime, we'll contract to maintain your ship's General Electric systems and equipment in top working order, year round. ^

Who will be there when your ship comes in? *INSTALLATION AND SERVICE ENGINEERING DIVISION