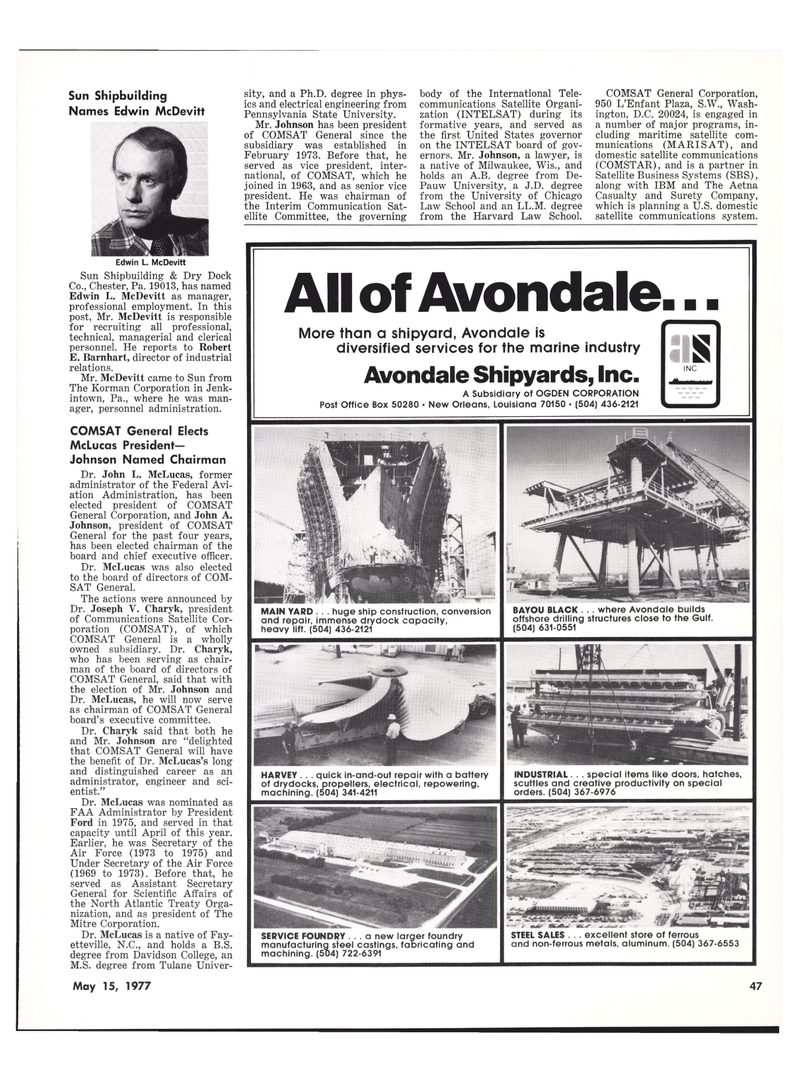 Edwin L. McDevitt as manager, professional employment. In this post, Mr. McDevitt is responsible for recruiting all professional, technical, managerial and clerical personnel. He reports to Robert

Mr. McDevitt came to Sun from

The Korman Corporation in Jenk- intown, Pa., where he was man- ager, personnel administration.

General Corporation, and John A.

General for the past four years, has been elected chairman of the board and chief executive officer.

Dr. McLucas was also elected to the board of directors of COM-

The actions were announced by

COMSAT General is a wholly owned subsidiary. Dr. Charyk, who has been serving as chair- man of the board of directors of

COMSAT General, said that with the election of Mr. Johnson and

Dr. Charyk said that both he and Mr. Johnson are "delighted that COMSAT General will have the benefit of Dr. McLucas's long and distinguished career as an administrator, engineer and sci- entist."

Dr. McLucas was nominated as

Ford in 1975, and served in that capacity until April of this year.

Earlier, he was Secretary of the

Under Secretary of the Air Force (1969 to 1973). Before that, he served as Assistant Secretary

General for Scientific Affairs of the North Atlantic Treaty Orga- nization, and as president of The

Dr. McLucas is a native of Fay- etteville, N.C., and holds a B.S. degree from Davidson College, an

M.S. degree from Tulane Univer- sity, and a Ph.D. degree in phys- ics and electrical engineering from

Mr. Johnson has been president of COMSAT General since the subsidiary was established in

February 1973. Before that, he served as vice president, inter- national, of COMSAT, which he joined in 1963, and as senior vice president. He was chairman of the Interim Communication Sat- ellite Committee, the governing body of the International Tele- communications Satellite Organi- zation (INTELSAT) during its formative years, and served as the first United States governor on the INTELSAT board of gov- ernors. Mr. Johnson, a lawyer, is a native of Milwaukee, Wis., and holds an A.B. degree from De-

Pauw University, a J.D. degree from the University of Chicago

Law School and an LL.M. degree from the Harvard Law School.

Satellite Business Systems (SBS), along with IBM and The Aetna

Casualty and Surety Company, which is planning a U.S. domestic satellite communications system.

More than a shipyard, Avondale is diversified services for the marine industry

A Subsidiary of OGDEN CORPORATION