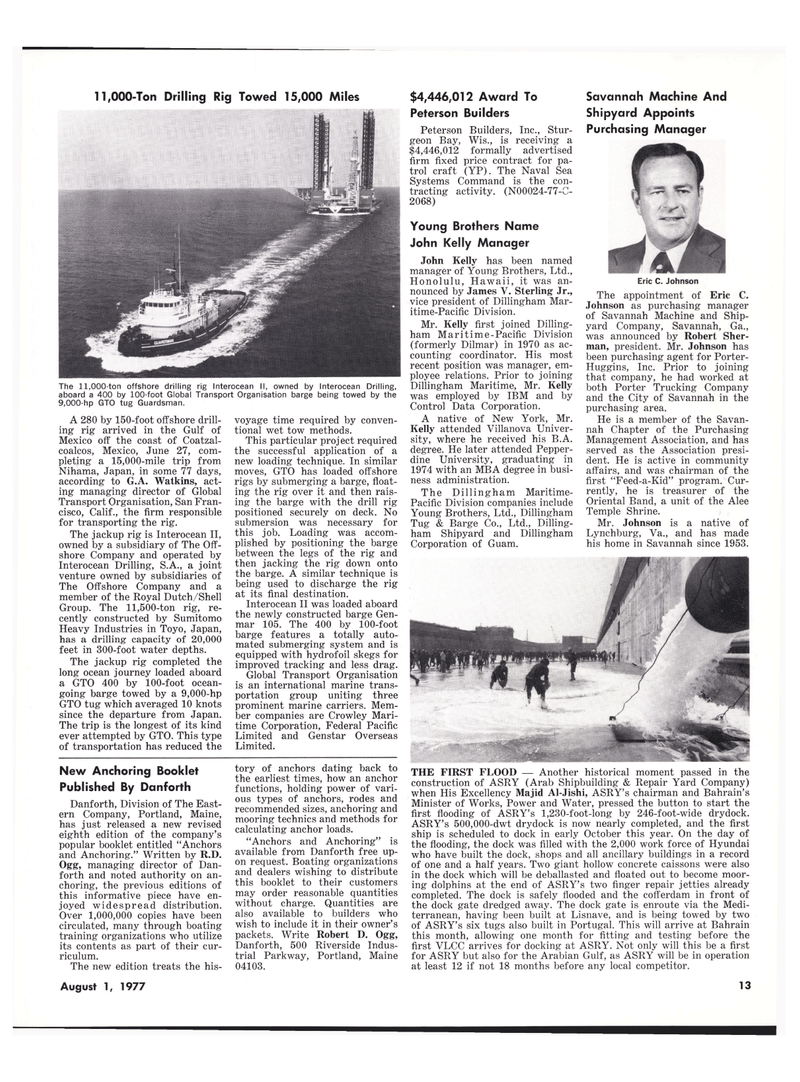 Ogg, managing director of Dan- forth and noted authority on an- choring, the previous editions of this informative piece have en- joyed widespread distribution.

Over 1,000,000 copies have been circulated, many through boating training organizations who utilize its contents as part of their cur- riculum.

The new edition treats the his- tory of anchors dating back to the earliest times, how an anchor functions, holding power of vari- ous types of anchors, rodes and recommended sizes, anchoring and mooring technics and methods for calculating anchor loads. "Anchors and Anchoring" is available from Danforth free up- on request. Boating organizations and dealers wishing to distribute this booklet to their customers may order reasonable quantities without charge. Quantities are also available to builders who wish to include it in their owner's packets. Write Robert D. Ogg,

John Kelly has been named manager of Young Brothers, Ltd.,

Dillingham Maritime, Mr. Kelly was employed by IBM and by

A native of New York, Mr.

The appointment of Eric C.

Huggins, Inc. Prior to joining that company, he had worked at both Porter Trucking Company and the City of Savannah in the purchasing area.

Management Association, and has served as the Association presi- dent. He is active in community affairs, and was chairman of the first "Feed-a-Kid" program. Cur- rently, he is treasurer of the

Oriental Band, a unit of the Alee

Mr. Johnson is a native of

Lynchburg, Va., and has made his home in Savannah since 1953.

Nihama, Japan, in some 77 days, according to G.A. Watkins, act- ing managing director of Global

The jackup rig is Interocean II, owned by a subsidiary of The Off- shore Company and operated by

Interocean Drilling, S.A., a joint venture owned by subsidiaries of

The Offshore Company and a member of the Royal Dutch/Shell

Group. The 11,500-ton rig, re- cently constructed by Sumitomo

Heavy Industries in Toyo, Japan, has a drilling capacity of 20,000 feet in 300-foot water depths.

The jackup rig completed the long ocean journey loaded aboard a GTO 400 by 100-foot ocean- going barge towed by a 9,000-hp

GTO tug which averaged 10 knots since the departure from Japan.

The trip is the longest of its kind ever attempted by GTO. This type of transportation has reduced the voyage time required by conven- tional wet tow methods.

This particular project required the successful application of a new loading technique. In similar moves, GTO has loaded offshore rigs by submerging a barge, float- ing the rig over it and then rais- ing the barge with the drill rig positioned securely on deck. No submersion was necessary for this job. Loading was accom- plished by positioning the barge between the legs of the rig and then jacking the rig down onto the barge. A similar technique is being used to discharge the rig at its final destination.

Interocean II was loaded aboard the newly constructed barge Gen- mar 105. The 400 by 100-foot barge features a totally auto- mated submerging system and is equipped with hydrofoil skegs for improved tracking and less drag.

THE FIRST FLOOD — Another historical moment passed in the construction of ASRY (Arab Shipbuilding & Repair Yard Company) when His Excellency Majid Al-Jishi, ASRY's chairman and Bahrain's

Minister of Works, Power and Water, pressed the button to start the first flooding of ASRY's 1,230-foot-long by 246-foot-wide drydock.

ASRY's 500,000-dwt drydock is now nearly completed, and the first ship is scheduled to dock in early October this year. On the day of the flooding, the dock was filled with the 2,000 work force of Hyundai who have built the dock, shops and all ancillary buildings in a record of one and a half years. Two giant hollow concrete caissons were also in the dock which will be deballasted and floated out to become moor- ing dolphins at the end of ASRY's two finger repair jetties already completed. The dock is safely flooded and the cofferdam in front of the dock gate dredged away. The dock gate is enroute via the Medi- terranean, having been built at Lisnave, and is being towed by two of ASRY's six tugs also built in Portugal. This will arrive at Bahrain this month, allowing one month for fitting and testing before the first VLCC arrives for docking at ASRY. Not only will this be a first for ASRY but also for the Arabian Gulf, as ASRY will be in operation at least 12 if not 18 months before any local competitor.