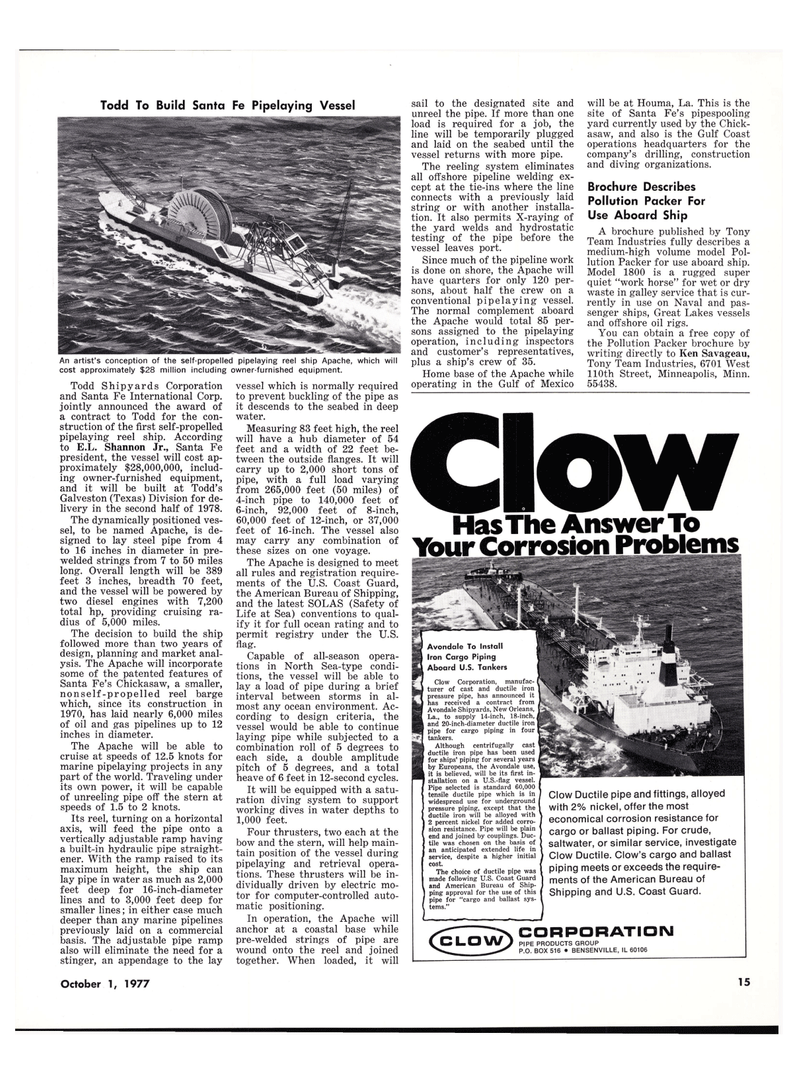 An artist's conception of the self-propelled pipelaying reel ship Apache, which will cost approximately $28 million including owner-furnished equipment.

Todd Shipyards Corporation and Santa Fe International Corp. jointly announced the award of a contract to Todd for the con- struction of the first self-propelled pipelaying reel ship. According to E.L. Shannon Jr., Santa Fe president, the vessel will cost ap- proximately $28,000,000, includ- ing owner-furnished equipment, and it will be built at Todd's

Galveston (Texas) Division for de- livery in the second half of 1978.

The dynamically positioned ves- sel, to be named Apache, is de- signed to lay steel pipe from 4 to 16 inches in diameter in pre- welded strings from 7 to 50 miles long. Overall length will be 389 feet 3 inches, breadth 70 feet, and the vessel will be powered by two diesel engines with 7,200 total hp, providing cruising ra- dius of 5,000 miles.

Santa Fe's Chickasaw, a smaller, nonself-propelled reel barge which, since its construction in 1970, has laid nearly 6,000 miles of oil and gas pipelines up to 12 inches in diameter.

The Apache will be able to cruise at speeds of 12.5 knots for marine pipelaying projects in any part of the world. Traveling under its own power, it will be capable of unreeling pipe off the stern at speeds of 1.5 to 2 knots.

Its reel, turning on a horizontal axis, will feed the pipe onto a vertically adjustable ramp having a built-in hydraulic pipe straight- ener. With the ramp raised to its maximum height, the ship can lay pipe in water as much as 2,000 feet deep for 16-inch-diameter lines and to 3,000 feet deep for smaller lines; in either case much deeper than any marine pipelines previously laid on a commercial basis. The adjustable pipe ramp also will eliminate the need for a stinger, an appendage to the lay vessel which is normally required to prevent buckling of the pipe as it descends to the seabed in deep water.

The Apache is designed to meet all rules and registration require- ments of the U.S. Coast Guard, the American Bureau of Shipping, and the latest SOLAS (Safety of

Life at Sea) conventions to qual- ify it for full ocean rating and to permit registry under the U.S. flag.

Capable of all-season opera- tions in North Sea-type condi- tions, the vessel will be able to lay a load of pipe during a brief interval between storms in al- most any ocean environment. Ac- cording to design criteria, the vessel would be able to continue laying pipe while subjected to a combination roll of 5 degrees to each side, a double amplitude pitch of 5 degrees, and a total heave of 6 feet in 12-second cycles.

It will be equipped with a satu- ration diving system to support working dives in water depths to 1,000 feet.

Four thrusters, two each at the bow and the stern, will help main- tain position of the vessel during pipelaying and retrieval opera- tions. These thrusters will be in- dividually driven by electric mo- tor for computer-controlled auto- matic positioning.

In operation, the Apache will anchor at a coastal base while pre-welded strings of pipe are wound onto the reel and joined together. When loaded, it will sail to the designated site and unreel the pipe. If more than one load is required for a job, the line will be temporarily plugged and laid on the seabed until the vessel returns with more pipe.

The reeling system eliminates all offshore pipeline welding ex- cept at the tie-ins where the line connects with a previously laid string or with another installa- tion. It also permits X-raying of the yard welds and hydrostatic testing of the pipe before the vessel leaves port.

Since much of the pipeline work is done on shore, the Apache will have quarters for only 120 per- sons, about half the crew on a conventional pipelaying vessel.

The normal complement aboard the Apache would total 85 per- sons assigned to the pipelaying operation, including inspectors and customer's representatives, plus a ship's crew of 35.

Home base of the Apache while operating in the Gulf of Mexico will be at Houma, La. This is the site of Santa Fe's pipespooling yard currently used by the Chick- asaw, and also is the Gulf Coast operations headquarters for the company's drilling, construction and diving organizations.

A brochure published by Tony

Model 1800 is a rugged super quiet "work horse" for wet or dry waste in galley service that is cur- rently in use on Naval and pas- senger ships, Great Lakes vessels and offshore oil rigs.

You can obtain a free copy of the Pollution Packer brochure by writing directly to Ken Savageau,

Has The Answer To Your Corrosion Problems

Clow Corporation, manufac- turer of cast and ductile iron pressure pipe, has announced it has received a contract from

Although centrifugally cast ductile iron pipe has been used for ships' piping for several years by Europeans, the Avondale use, it is believed, will be its first in- stallation on a U.S.-flag vessel.

Pipe selected is standard 60,000 tensile ductile pipe which is in widespread use for underground pressure piping, except that the ductile iron will be alloyed with 2 percent nickel for added corro- sion resistance. Pipe will be plain end and joined by couplings. Duc- tile was chosen on the basis of an anticipated extended life in service, despite a higher initial cost.

The choice of ductile pipe was made following U.S. Coast Guard and American Bureau of Ship- ping approval for the use of this pipe for "cargo and ballast sys- tems."

Clow Ductile pipe and fittings, alloyed with 2% nickel, offer the most economical corrosion resistance for cargo or ballast piping. For crude, saltwater, or similar service, investigate

Clow Ductile. Clow's cargo and ballast piping meets or exceeds the require- ments of the American Bureau of