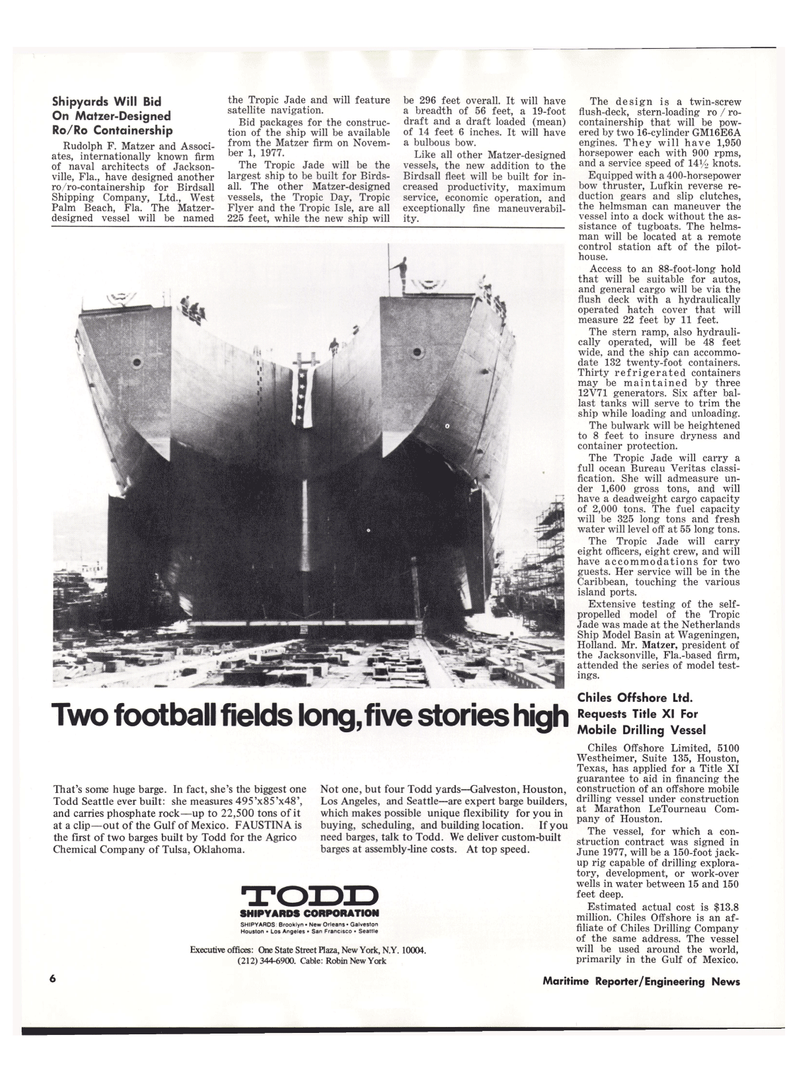 Palm Beach, Fla. The Matzer- designed vessel will be named the Tropic Jade and will feature satellite navigation.

Bid packages for the construc- tion of the ship will be available from the Matzer firm on Novem- ber 1, 1977.

The Tropic Jade will be the largest ship to be built for Birds- all. The other Matzer-designed vessels, the Tropic Day, Tropic

Like all other Matzer-designed vessels, the new addition to the

The design is a twin-screw flush-deck, stern-loading ro / ro- containership that will be pow- ered by two 16-cylinder GM16E6A engines. They will have 1,950 horsepower each with 900 rpms, and a service speed of 14y2 knots.

Equipped with a 400-horsepower bow thruster, Lufkin reverse re- duction gears and slip clutches, the helmsman can maneuver the vessel into a dock without the as- sistance of tugboats. The helms- man will be located at a remote control station aft of the pilot- house.

Access to an 88-foot-long hold that will be suitable for autos, and general cargo will be via the flush deck with a hydraulically operated hatch cover that will measure 22 feet by 11 feet.

The stern ramp, also hydrauli- cally operated, will be 48 feet wide, and the ship can accommo- date 132 twenty-foot containers.

Thirty refrigerated containers may be maintained by three 12V71 generators. Six after bal- last tanks will serve to trim the ship while loading and unloading.

The bulwark will be heightened to 8 feet to insure dryness and container protection.

The Tropic Jade will carry a full ocean Bureau Veritas classi- fication. She will admeasure un- der 1,600 gross tons, and will have a deadweight cargo capacity of 2,000 tons. The fuel capacity will be 325 long tons and fresh water will level off at 55 long tons.

The Tropic Jade will carry eight officers, eight crew, and will have accommodations for two guests. Her service will be in the

Extensive testing of the self- propelled model of the Tropic

Jade was made at the Netherlands

That's some huge barge. In fact, she's the biggest one

Todd Seattle ever built: she measures 495'x85'x48', and carries phosphate rock—up to 22,500 tons of it at a clip—out of the Gulf of Mexico. FAUSTINA is the first of two barges built by Todd for the Agrico

Not one, but four Todd yards—Galveston, Houston,

Los Angeles, and Seattle—are expert barge builders, which makes possible unique flexibility for you in buying, scheduling, and building location. If you need barges, talk to Todd. We deliver custom-built barges at assembly-line costs. At top speed.

Texas, has applied for a Title XI guarantee to aid in financing the construction of an offshore mobile drilling vessel under construction at Marathon LeTourneau Com- pany of Houston.

The vessel, for which a con- struction contract was signed in

Estimated actual cost is $13.8 million. Chiles Offshore is an af- filiate of Chiles Drilling Company of the same address. The vessel will be used around the world, primarily in the Gulf of Mexico. 10