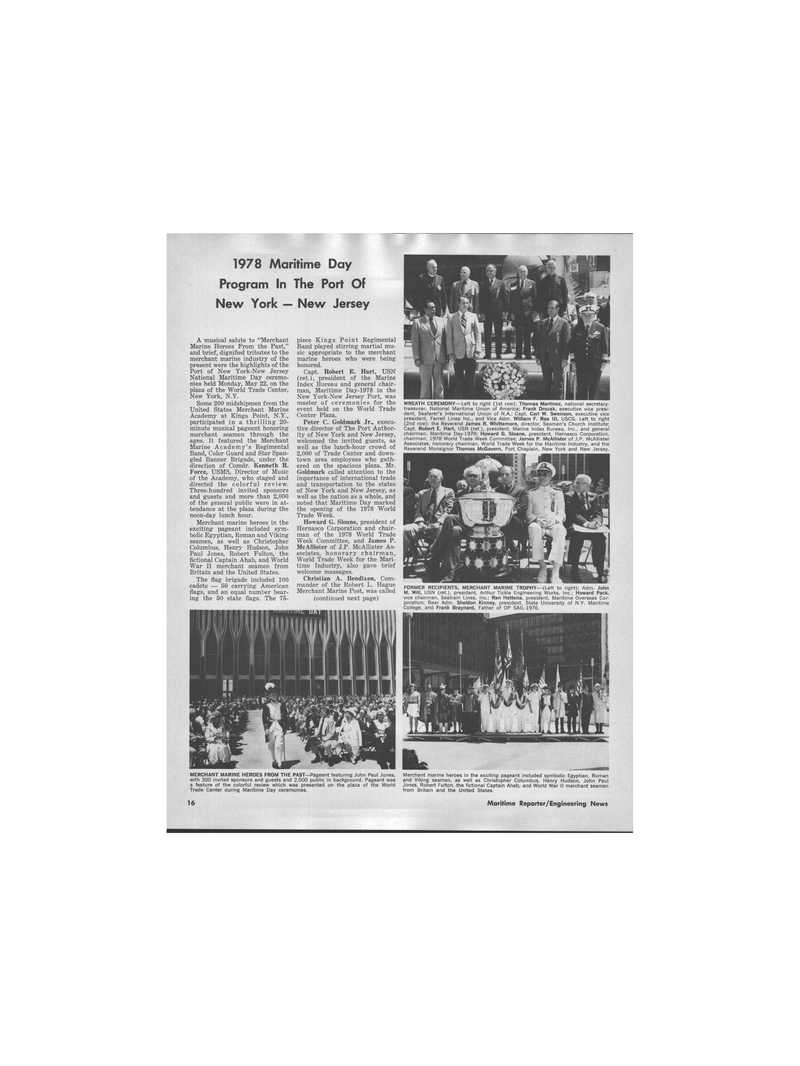 Program In The Port Of

MERCHANT MARINE HEROES FROM THE PAST—Pageant featuring John Paul Jones, with 300 invited sponsors and guests and 2,000 public in background. Pageant was a feature of the colorful review which was presented on the plaza of the World

A musical salute to "Merchant

Marine Heroes From the Past," and brief, dignified tributes to the merchant marine industry of the present were the highlights of the

National Maritime Day ceremo- nies held Monday, May 22, on the plaza of the World Trade Center,

Some 200 midshipmen from the

Academy at Kings Point, N.Y., participated in a thrilling 20- minute musical pageant honoring merchant seamen through the ages. It featured the Merchant

Force, USMS, Director of Music of the Academy, who staged and directed the colorful review.

Three-hundred invited sponsors and guests and more than 2,000 of the general public were in at- tendance at the plaza during the noon-day lunch hour.

Britain and the United States.

Band played stirring martial mu- sic appropriate to the merchant marine heroes who were being honored.

Index Bureau and general chair- man, Maritime Day-1978 in the

New York-New Jersey Port, was master of ceremonies for the event held on the World Trade

Peter C. Goldmark Jr., execu- tive director of The Port Author- ity of New York and New Jersey, welcomed the invited guests, as well as the lunch-hour crowd of 2,000 of Trade Center and down- town area employees who gath- ered on the spacious plaza. Mr.

Goldmark called attention to the importance of international trade and transportation to the states of New York and New Jersey, as well as the nation as a whole, and noted that Maritime Day marked the opening of the 1978 World

Hernasco Corporation and chair- man of the 1978 World Trade

Christian A. Bendixen, Com- mander of the Robert L. Hague

Associates, honorary chairman, World Trade Week for the Maritime Industry, and the