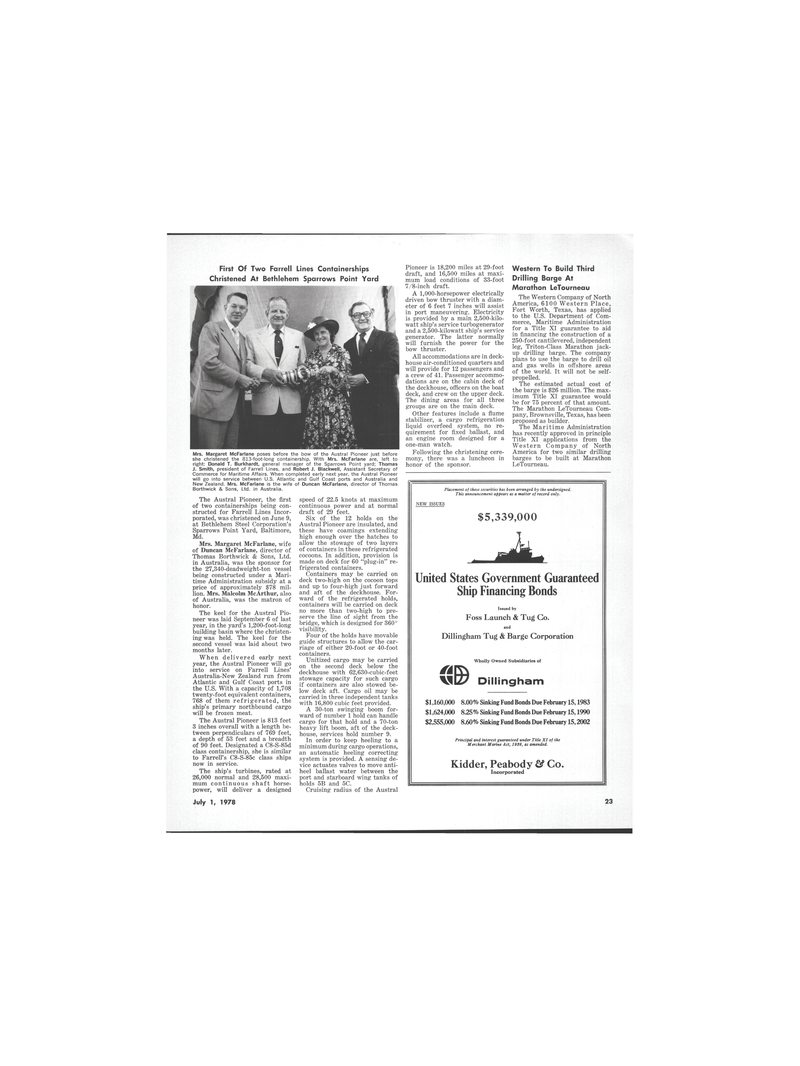 Mrs. Margaret McFarlane poses before the bow of the Austral Pioneer just before she christened the 813-foot-long containership. With Mrs. McFarlane are, left to right: Donald T. Burkhardt, general manager of the Sparrows Point yard; Thomas

Commerce for Maritime Affairs. When completed early next year, the Austral Pioneer will go into service between U.S. Atlantic and Gulf Coast ports and Australia and

New Zealand. Mrs. McFarlane is the wife of Duncan McFarlane, director of Thomas

The Austral Pioneer, the first of two containerships being con- structed for Farrell Lines Incor- porated, was christened on June 9, at Bethlehem Steel Corporation's

Thomas Borthwick & Sons, Ltd. in Australia, was the sponsor for the 27,340-deadweight-ton vessel being constructed under a Mari- time Administration subsidy at a price of approximately $78 mil- lion. Mrs. Malcolm McArthur, also of Australia, was the matron of honor.

The keel for the Austral Pio- neer was laid September 6 of last year, in the yard's 1,200-foot-long building basin where the christen- ing was held. The keel for the second vessel was laid about two months later.

When delivered early next year, the Austral Pioneer will go into service on Farrell Lines'

Atlantic and Gulf Coast ports in the U.S. With a capacity of 1,708 twenty-foot equivalent containers, 768 of them refrigerated, the ship's primary northbound cargo will be frozen meat.

The Austral Pioneer is 813 feet 3 inches overall with a length be- tween perpendiculars of 769 feet, a depth of 53 feet and a breadth of 90 feet. Designated a C8-S-85d class containership, she is similar to Farrell's C8-S-85c class ships now in service.

The ship's turbines, rated at 26,000 normal and 28,500 maxi- mum continuous shaft horse- power, will deliver a designed speed of 22.5 knots at maximum continuous power and at normal draft of 29 feet.

Austral Pioneer are insulated, and these have coamings extending high enough over the hatches to allow the stowage of two layers of containers in these refrigerated cocoons. In addition, provision is made on deck for 60 "plug-in" re- frigerated containers.

Containers may be carried on deck two-high on the cocoon tops and up to four-high just forward and aft of the deckhouse. For- ward of the refrigerated holds, containers will be carried on deck no more than two-high to pre- serve the line of sight from the bridge, which is designed for 360° visibility.

Four of the holds have movable guide structures to allow the car- riage of either 20-foot or 40-foot containers.

Unitized cargo may be carried on the second deck below the deckhouse with 62,630-cubic-feet stowage capacity for such cargo if containers are also stowed be- low deck aft. Cargo oil may be carried in three independent tanks with 16,800 cubic feet provided.

A 30-ton swinging boom for- ward of number 1 hold can handle cargo for that hold and a 70-ton heavy lift boom, aft of the deck- house, services hold number 9.

In order to keep heeling to a minimum during cargo operations, an automatic heeling correcting system is provided. A sensing de- vice actuates valves to move anti- heel ballast water between the port and starboard wing tanks of holds 5B and 5C.

Cruising radius of the Austral

All accommodations are in deck- house air-conditioned quarters and will provide for 12 passengers and a crew of 41. Passenger accommo- dations are on the cabin deck of the deckhouse, officers on the boat deck, and crew on the upper deck.

The dining areas for all three groups are on the main deck.

Other features include a flume stabilizer, a cargo refrigeration liquid overfeed system, no re- quirement for fixed ballast, and an engine room designed for a one-man watch.

Following the christening cere- mony, there was a luncheon in honor of the sponsor.

The Western Company of North

Fort Worth, Texas, has applied to the U.S. Department of Com- merce, Maritime Administration for a Title XI guarantee to aid in financing the construction of a 250-foot cantilevered, independent leg, Triton-Class Marathon jack- up drilling barge. The company plans to use the barge to drill oil and gas wells in offshore areas of the world. It will not be self- propelled.

The estimated actual cost of the barge is $26 million. The max- imum Title XI guarantee would be for 75 percent of that amount.

The Marathon LeTourneau Com- pany, Brownsville, Texas, has been proposed as builder.

The Maritime Administration has recently approved in principle

Title XI applications from the

America for two similar drilling barges to be built at Marathon

Placement of these securities has been arranged by the undersigned.

This announcement appears as a matter of record only.

Principal and interest guaranteed under Title XI of the