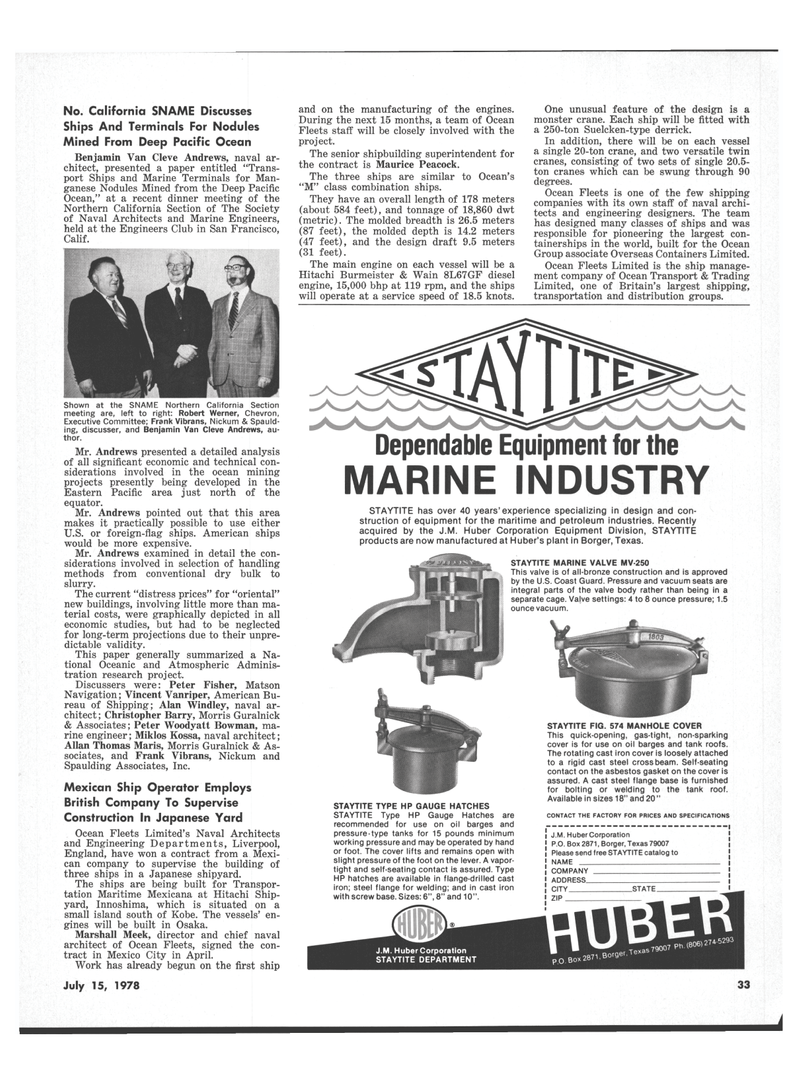 Ships And Terminals For Nodules

Ocean," at a recent dinner meeting of the

Northern California Section of The Society of Naval Architects and Marine Engineers, held at the Engineers Club in San Francisco,

Mr. Andrews presented a detailed analysis of all significant economic and technical con- siderations involved in the ocean mining projects presently being developed in the

Mr. Andrews pointed out that this area makes it practically possible to use either

U.S. or foreign-flag ships. American ships would be more expensive.

Mr. Andrews examined in detail the con- siderations involved in selection of handling methods from conventional dry bulk to slurry.

The current "distress prices" for "oriental" new buildings, involving little more than ma- terial costs, were graphically depicted in all economic studies, but had to be neglected for long-term projections due to their unpre- dictable validity.

England, have won a contract from a Mexi- can company to supervise the building of three ships in a Japanese shipyard.

The ships are being built for Transpor- tation Maritime Mexicana at Hitachi Ship- yard, Innoshima, which is situated on a small island south of Kobe. The vessels' en- gines will be built in Osaka.

Work has already begun on the first ship and on the manufacturing of the engines.

During the next 15 months, a team of Ocean

Fleets staff will be closely involved with the project.

The senior shipbuilding superintendent for the contract is Maurice Peacock.

The main engine on each vessel will be a

One unusual feature of the design is a monster crane. Each ship will be fitted with a 250-ton Suelcken-type derrick.

In addition, there will be on each vessel a single 20-ton crane, and two versatile twin cranes, consisting of two sets of single 20.5- ton cranes which can be swung through 90 degrees.

Ocean Fleets is one of the few shipping companies with its own staff of naval archi- tects and engineering designers. The team has designed many classes of ships and was responsible for pioneering the largest con- tainerships in the world, built for the Ocean

Limited, one of Britain's largest shipping, transportation and distribution groups.

Dependable Equipment for the

STAYTITE has over 40 years'experience specializing in design and con- struction of equipment for the maritime and petroleum industries. Recently acquired by the J.M. Huber Corporation Equipment Division, STAYTITE products are now manufactured at Huber's plant in Borger, Texas.

This valve is of all-bronze construction and is approved by the U.S. Coast Guard. Pressure and vacuum seats are integral parts of the valve body rather than being in a separate cage. Valve settings: 4 to 8 ounce pressure; 1.5 ounce vacuum.

STAYTITE Type HP Gauge Hatches are recommended for use on oil barges and pressure-type tanks for 15 pounds minimum working pressure and may be operated by hand or foot. The cover lifts and remains open with slight pressure of the foot on the lever. A vapor- tight and self-seating contact is assured. Type

HP hatches are available in flange-drilled cast iron; steel flange for welding; and in cast iron with screw base. Sizes: 6", 8" and 10".

This quick-opening, gas-tight, non-sparking cover is for use on oil barges and tank roofs.

The rotating cast iron cover is loosely attached to a rigid cast steel crossbeam. Self-seating contact on the asbestos gasket on the cover is assured. A cast steel flange base is furnished for bolting or welding to the tank roof.