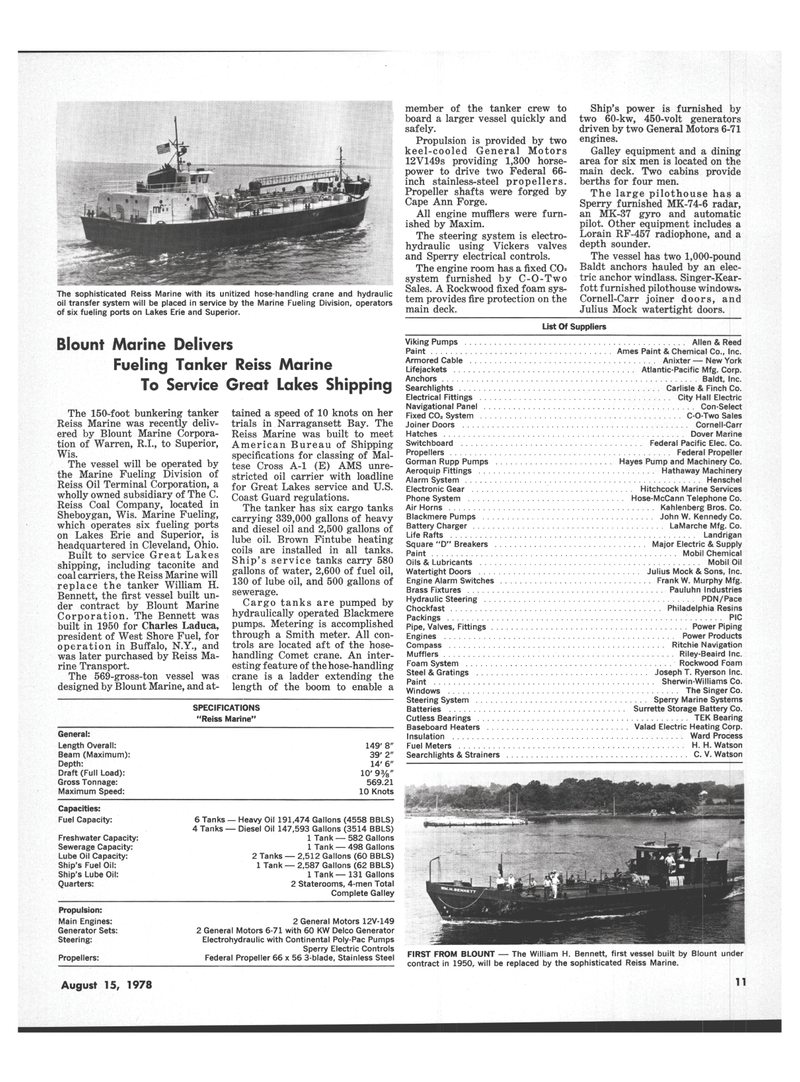 The sophisticated Reiss Marine with its unitized hose-handling crane and hydraulic oil transfer system will be placed in service by the Marine Fueling Division, operators of six fueling ports on Lakes Erie and Superior.

The vessel will be operated by the Marine Fueling Division of

Built to service Great Lakes shipping, including taconite and coal carriers, the Reiss Marine will replace the tanker William H.

Corporation. The Bennett was built in 1950 for Charles Laduca, president of West Shore Fuel, for operation in Buffalo, N.Y., and was later purchased by Reiss Ma- rine Transport.

The 569-gross-ton vessel was designed by Blount Marine, and at- tained a speed of 10 knots on her trials in Narragansett Bay. The

Reiss Marine was built to meet

The tanker has six cargo tanks carrying 339,000 gallons of heavy and diesel oil and 2,500 gallons of lube oil. Brown Fintube heating coils are installed in all tanks.

Cargo tanks are pumped by hydraulically operated Blackmere pumps. Metering is accomplished through a Smith meter. All con- trols are located aft of the hose- handling Comet crane. An inter- esting feature of the hose-handling crane is a ladder extending the length of the boom to enable a

Propeller shafts were forged by The large pilothouse has a

All engine mufflers were furn- an MK-37 gyro and automatic ished by Maxim. pilot. Other equipment includes a

FIRST FROM BLOUNT — The William H. Bennett, first vessel built by Blount under contract in 1950, will be replaced by the sophisticated Reiss Marine.