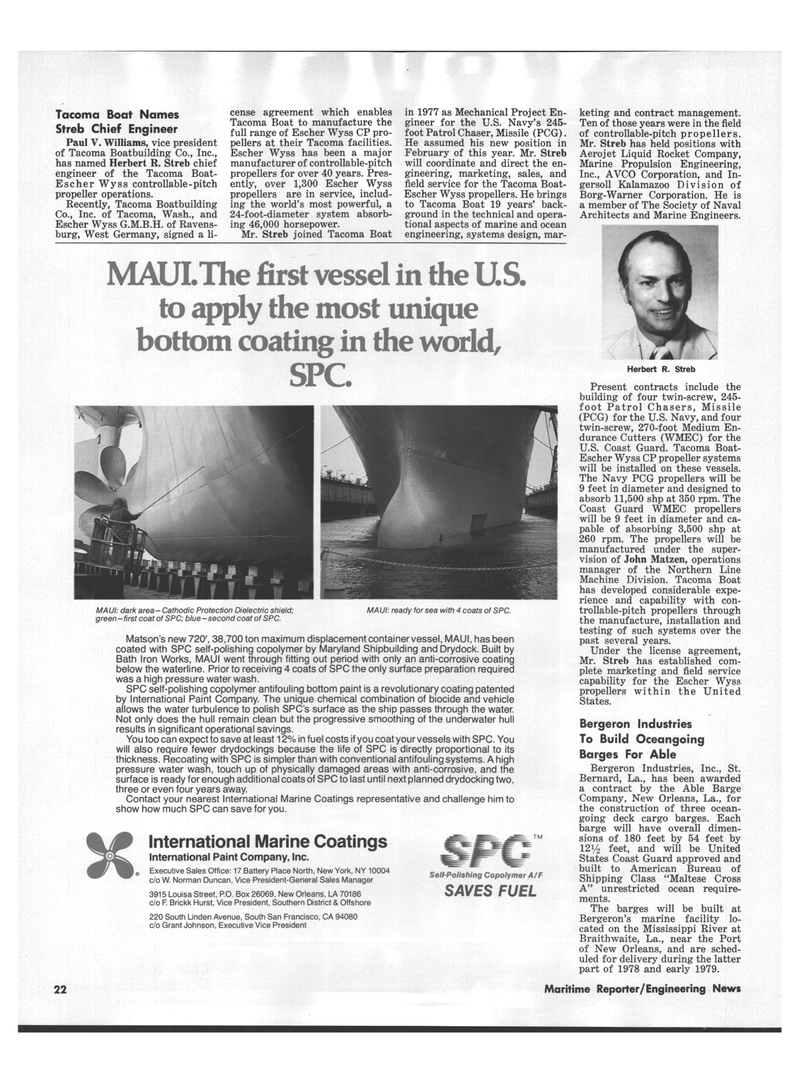 Escher Wyss has been a major manufacturer of controllable-pitch propellers for over 40 years. Pres- ently, over 1,300 Escher Wyss propellers are in service, includ- ing the world's most powerful, a 24-foot-diameter system absorb- ing 46,000 horsepower.

He assumed his new position in

February of this year. Mr. Streb will coordinate and direct the en- gineering, marketing, sales, and field service for the Tacoma Boat-

Escher Wyss propellers. He brings to Tacoma Boat 19 years' back- ground in the technical and opera- tional aspects of marine and ocean engineering, systems design, mar-

MAULThe first vessel in the U.S. to apply the most unique bottom coating in the world/

MAUI: ready for sea with 4 coats of SPC.

Bath Iron Works, MAUI went through fitting out period with only an anti-corrosive coating below the waterline. Prior to receiving 4 coats of SPC the only surface preparation required was a high pressure water wash.

SPC self-polishing copolymer antifouling bottom paint is a revolutionary coating patented by International Paint Company. The unique chemical combination of biocide and vehicle allows the water turbulence to polish SPC's surface as the ship passes through the water.

Not only does the hull remain clean but the progressive smoothing of the underwater hull results in significant operational savings.

You too can expect to save at least 12% in fuel costs if you coat your vessels with SPC. You will also require fewer drydockings because the life of SPC is directly proportional to its thickness. Recoating with SPC is simpler than with conventional antifouling systems. A high pressure water wash, touch up of physically damaged areas with anti-corrosive, and the surface is ready for enough additional coats of SPC to last until next planned drydocking two, three or even four years away.

Contact your nearest International Marine Coatings representative and challenge him to show how much SPC can save for you.

Ten of those years were in the field of controllable-pitch propellers.

Mr. Streb has held positions with

Inc., AVCO Corporation, and In- gersoll Kalamazoo Division of

Borg-Warner Corporation. He is a member of The Society of Naval

Escher Wyss CP propeller systems will be installed on these vessels.

The Navy PCG propellers will be 9 feet in diameter and designed to absorb 11,500 shp at 350 rpm. The

Machine Division. Tacoma Boat has developed considerable expe- rience and capability with con- trollable-pitch propellers through the manufacture, installation and testing of such systems over the past several years.

Under the license agreement,

Mr. Streb has established com- plete marketing and field service capability for the Escher Wyss propellers within the United

Bernard, La., has been awarded a contract by the Able Barge

Company, New Orleans, La., for the construction of three ocean- going deck cargo barges. Each barge will have overall dimen- sions of 180 feet by 54 feet by 12!/2 feet, and will be United

States Coast Guard approved and built to American Bureau of

The barges will be built at

Bergeron's marine facility lo- cated on the Mississippi River at

Braithwaite, La., near the Port of New Orleans, and are sched- uled for delivery during the latter part of 1978 and early 1979. 22 Maritime Reporter/Engineering News