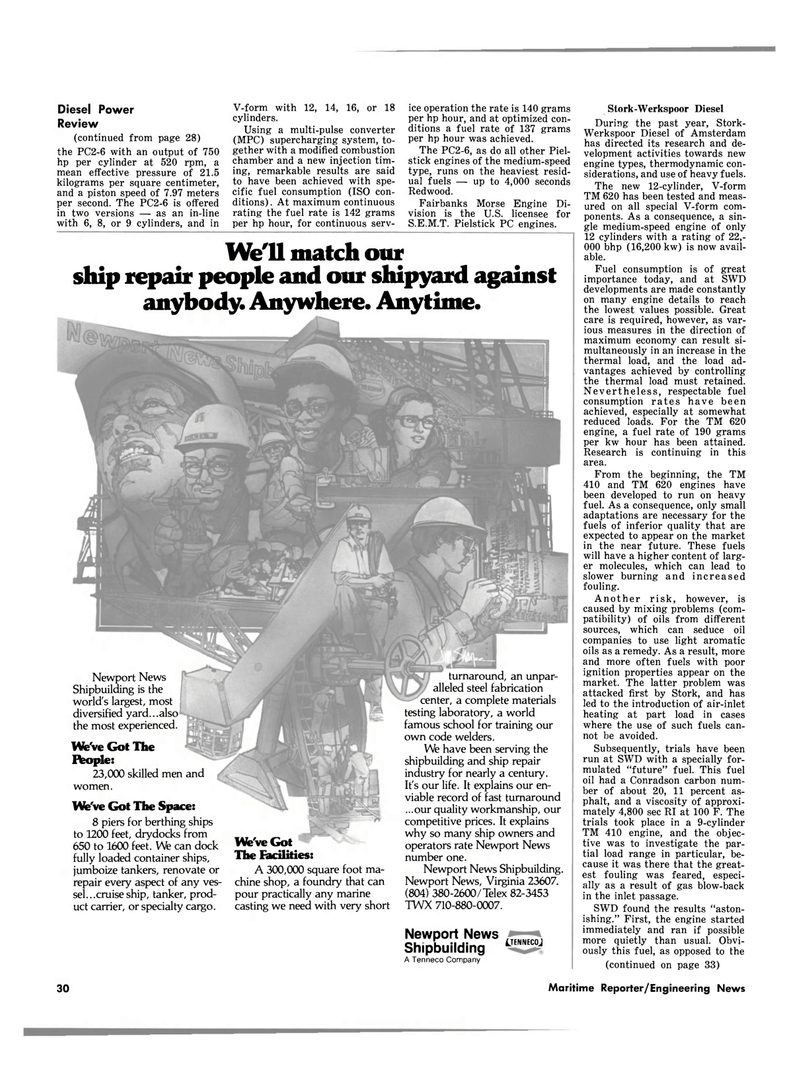 The PC2-6, as do all other Piel- stick engines of the medium-speed type, runs on the heaviest resid- ual fuels — up to 4,000 seconds

Fairbanks Morse Engine Di- vision is the U.S. licensee for

During the past year, Stork-

Werkspoor Diesel of Amsterdam has directed its research and de- velopment activities towards new engine types, thermodynamic con- siderations, and use of heavy fuels.

Fuel consumption is of great importance today, and at SWD developments are made constantly on many engine details to reach the lowest values possible. Great care is required, however, as var- ious measures in the direction of maximum economy can result si- multaneously in an increase in the thermal load, and the load ad- vantages achieved by controlling the thermal load must retained.

Nevertheless, respectable fuel consumption rates have been achieved, especially at somewhat reduced loads. For the TM 620 engine, a fuel rate of 190 grams per kw hour has been attained.

Research is continuing in this area.

From the beginning, the TM 410 and TM 620 engines have been developed to run on heavy fuel. As a consequence, only small adaptations are necessary for the fuels of inferior quality that are expected to appear on the market in the near future. These fuels will have a higher content of larg- er molecules, which can lead to slower burning and increased fouling.

Another risk, however, is caused by mixing problems (com- patibility) of oils from different sources, which can seduce oil companies to use light aromatic oils as a remedy. As a result, more and more often fuels with poor ignition properties appear on the market. The latter problem was attacked first by Stork, and has led to the introduction of air-inlet heating at part load in cases where the use of such fuels can- not be avoided.

Subsequently, trials have been run at SWD with a specially for- mulated "future" fuel. This fuel oil had a Conradson carbon num- ber of about 20, 11 percent as- phalt, and a viscosity of approxi- mately 4,800 sec RI at 100 F. The trials took place in a 9-cylinder

TM 410 engine, and the objec- tive was to investigate the par- tial load range in particular, be- cause it was there that the great- est fouling was feared, especi- ally as a result of gas blow-back in the inlet passage.

SWD found the results "aston- ishing." First, the engine started immediately and ran if possible more quietly than usual. Obvi- ously this fuel, as opposed to the (continued on page 33)

We'll match our ship repair people and our shipyard against anybody. Anywhere. Anytime.

Shipbuilding is the world's largest, most diversified yard...also the most experienced.

We've Got The Space: 8 piers for berthing ships to 1200 feet, drydocks from 650 to 1600 feet. We can dock fully loaded container ships, jumboize tankers, renovate or repair every aspect of any ves- sel...cruise ship, tanker, prod- uct carrier, or specialty cargo.

A 300,000 square foot ma- chine shop, a foundry that can pour practically any marine casting we need with very short turnaround, an unpar- alleled steel fabrication center, a complete materials testing laboratory, a world famous school for training our own code welders.

We have been serving the shipbuilding and ship repair industry for nearly a century.

It's our life. It explains our en- viable record of fast turnaround ...our quality workmanship, our competitive prices. It explains why so many ship owners and operators rate Newport News number one.