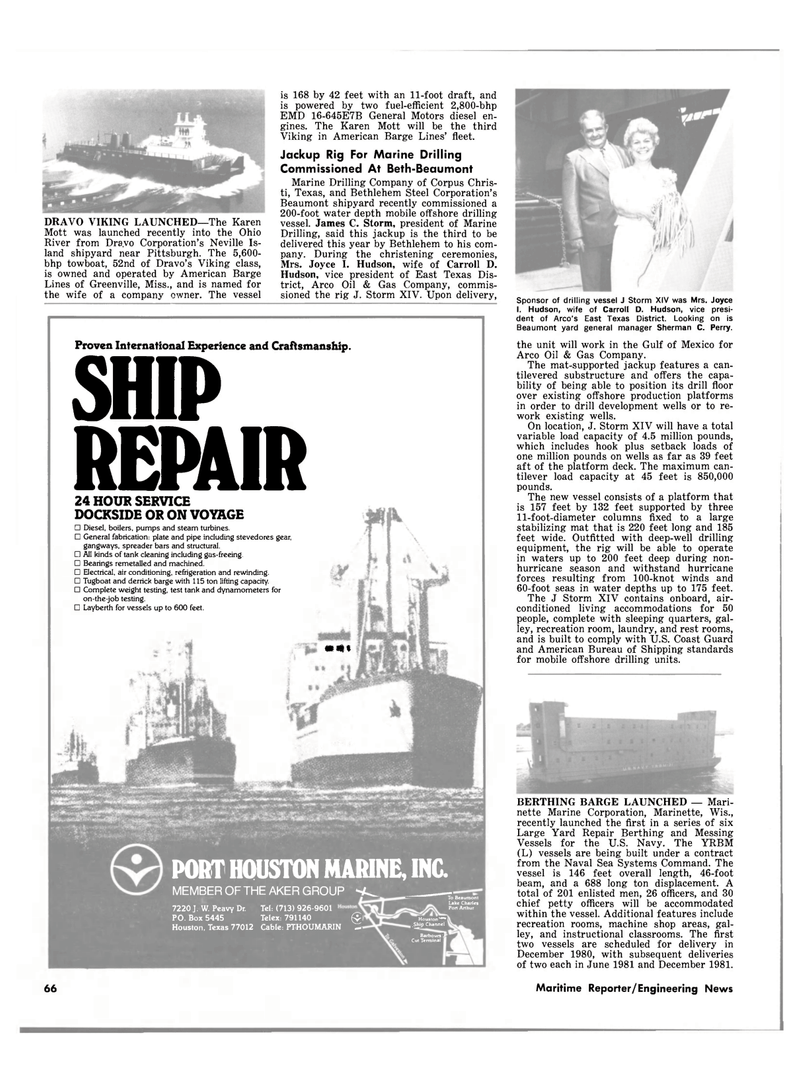 Mott was launched recently into the Ohio

River from Dra.vo Corporation's Neville Is- land shipyard near Pittsburgh. The 5,600- bhp towboat, 52nd of Dravo's Viking class, is owned and operated by American Barge

Lines of Greenville, Miss., and is named for the wife of a company owner. The vessel is 168 by 42 feet with an 11-foot draft, and is powered by two fuel-efficient 2,800-bhp

Drilling, said this jackup is the third to be delivered this year by Bethlehem to his com- pany. During the christening ceremonies,

Beaumont yard general manager Sherman C. Perry. the unit will work in the Gulf of Mexico for

The mat-supported jackup features a can- tilevered substructure and offers the capa- bility of being able to position its drill floor over existing offshore production platforms in order to drill development wells or to re- work existing wells.

On location, J. Storm XIV will have a total variable load capacity of 4.5 million pounds, which includes hook plus setback loads of one million pounds on wells as far as 39 feet aft of the platform deck. The maximum can- tilever load capacity at 45 feet is 850,000 pounds.

The new vessel consists of a platform that is 157 feet by 132 feet supported by three 11-foot-diameter columns fixed to a large stabilizing mat that is 220 feet long and 185 feet wide. Outfitted with deep-well drilling equipment, the rig will be able to operate in waters up to 200 feet deep during non- hurricane season and withstand hurricane forces resulting from 100-knot winds and 60-foot seas in water depths up to 175 feet.

Vessels for the U.S. Navy. The YRBM (L) vessels are being built under a contract from the Naval Sea Systems Command. The vessel is 146 feet overall length, 46-foot beam, and a 688 long ton displacement. A total of 201 enlisted men, 26 officers, and 30 chief petty officers will be accommodated within the vessel. Additional features include recreation rooms, machine shop areas, gal- ley, and instructional classrooms. The first two vessels are scheduled for delivery in