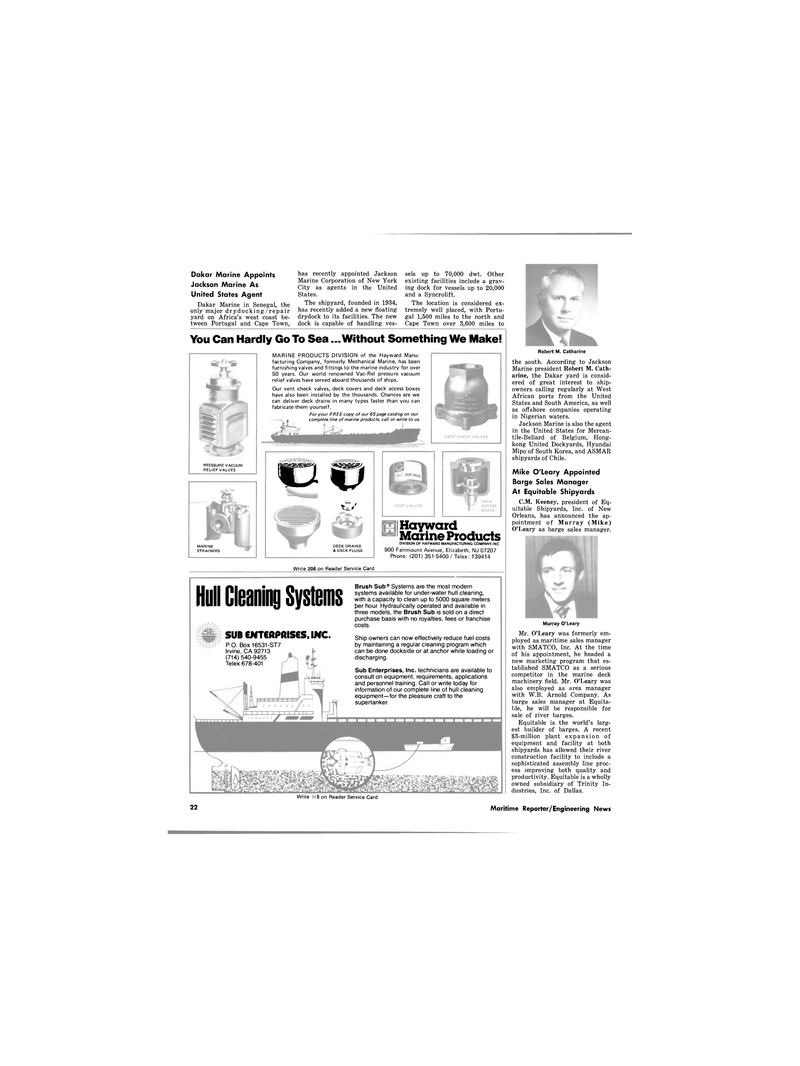 Dakar Marine in Senegal, the only major drydocking/repair yard on Africa's west coast be- tween Portugal and Cape Town, has recently appointed Jackson

City as agents in the United

The shipyard, founded in 1934, has recently added a new floating drydock to its facilities. The new dock is capable of handling ves- sels up to 70,000 dwt. Other existing facilities include a grav- ing dock for vessels up to 20,000 and a Syncrolift.

The location is considered ex- tremely well placed, with Portu- gal 1,500 miles to the north and

You Can Hardly Go To Sea ...Without Something We Make!

MARINE PRODUCTS DIVISION of the Hayward Manu- facturing Company, formerly Mechanical Marine, has been furnishing valves and fittings to the marine industry for over 50 years. Our world renowned Vac-Rel pressure vacuum relief valves have served aboard thousands of ships.

Our vent check valves, deck covers and deck access boxes have also been installed by the thousands. Chances are we can deliver deck drains in many types faster than you can fabricate them yourself.

For your FREE copy of our 65 page catalog on our „ complete line of marine products, call or write to us.

Brush Sub® Systems are the most modern systems available for under-water hull cleaning, with a capacity to clean up to 5000 square meters per hour. Hydraulically operated and available in three models, the Brush Sub is sold on a direct purchase basis with no royalties, fees or franchise costs.

Ship owners can now effectively reduce fuel costs by maintaining a regular cleaning program which can be done dockside or at anchor while loading or discharging.

Sub Enterprises, Inc. technicians are available to consult on equipment, requirements, applications and personnel training. Call or write today for information of our complete line of hull cleaning equipment—for the pleasure craft to the supertanker.

Robert M. Catharine the south. According to Jackson

African ports from the United

States and South America, as well as offshore companies operating in Nigerian waters.

Jackson Marine is also the agent in the United States for Mercan- tile-Beliard of Belgium, Hong- kong United Dockyards, Hyundai

Mipo of South Korea, and ASMAR shipyards of Chile.

Orleans, has announced the ap- pointment of Murray (Mike)

Mr. O'Leary was formerly em- ployed as maritime sales manager with SMATCO, Inc. At the time of his appointment, he headed a new marketing program that es- tablished SMATCO as a serious competitor in the marine deck machinery field. Mr. O'Leary was also employed as area manager with W.B. Arnold Company. As barge sales manager at Equita- ble, he will be responsible for sale of river barges.

Equitable is the world's larg- est builder of barges. A recent $3-million plant expansion of equipment and facility at both shipyards has allowed their river construction facility to include a sophisticated assembly line proc- ess improving both quality and productivity. Equitable is a wholly owned subsidiary of Trinity In- dustries, Inc. of Dallas.