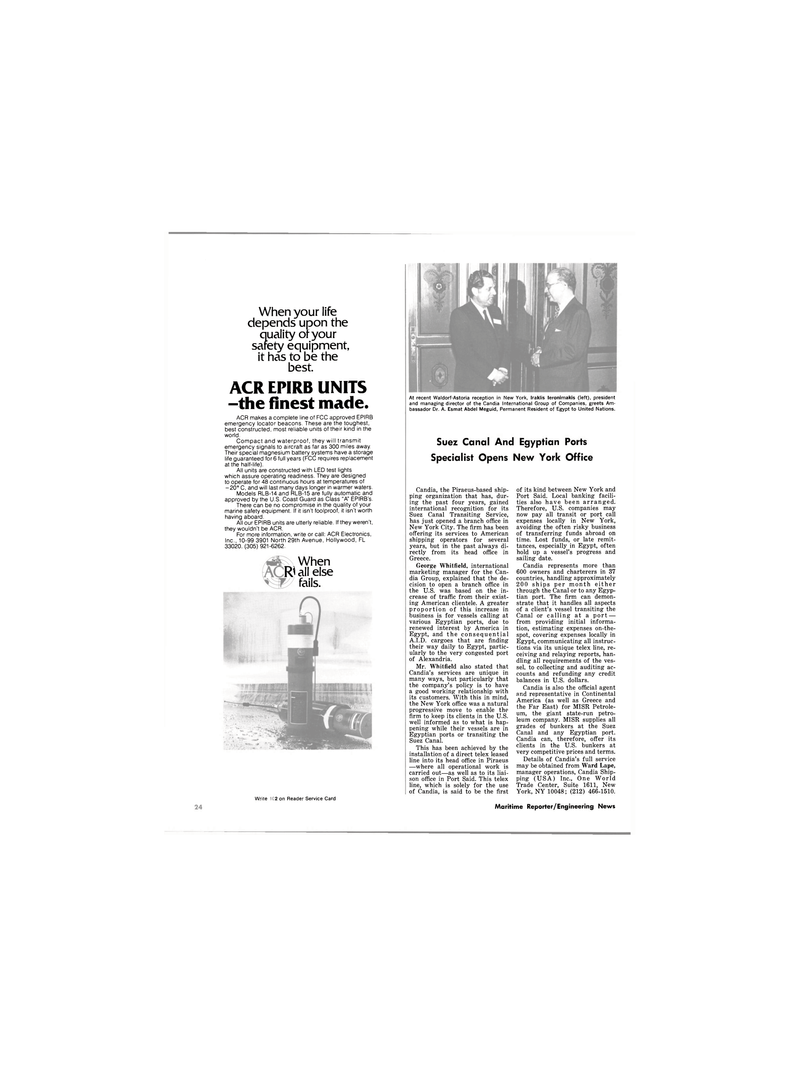 When your life depends upon the quality of your safety equipment, it has to be the best.

ACR EPIRB UNITS -the finest made.

ACR makes a complete line of FCC approved EPIRB emergency locator beacons. These are the toughest, best constructed, most reliable units of their kind in the world.

Compact and waterproof, they will transmit emergency signals to aircraft as far as 300 miles away.

Their special magnesium battery systems have a storage life guaranteed for 6 full years (FCC requires replacement at the half-life).

All units are constructed with LED test lights which assure operating readiness. They are designed to operate for 48 continuous hours at temperatures of -20° C, and will last many days longer in warmer waters.

Models RLB-14 and RLB-15 are fully automatic and approved by the U.S. Coast Guard as Class "A" EPIRB's.

There can be no compromise in the quality of your marine safety equipment. If it isn't foolproof, it isn't worth having aboard.

All our EPIRB units are utterly reliable. If they weren't, they wouldn't be ACR.

Ri all else fails.

Candia, the Piraeus-based ship- ping organization that has, dur- ing the past four years, gained international recognition for its

New York City. The firm has been offering its services to American shipping operators for several years, but in the past always di- rectly from its head office in

George Whitfield, international marketing manager for the Can- dia Group, explained that the de- cision to open a branch office in the U.S. was based on the in- crease of traffic from their exist- ing American clientele. A greater proportion of this increase in business is for vessels calling at various Egyptian ports, due to renewed interest by America in

Egypt, and the consequential

A.I.D. cargoes that are finding their way daily to Egypt, partic- ularly to the very congested port of Alexandria.

Candia's services are unique in many ways, but particularly that the company's policy is to have a good working relationship with its customers. With this in mind, the New York office was a natural progressive move to enable the firm to keep its clients in the U.S. well informed as to what is hap- pening while their vessels are in

Egyptian ports or transiting the

This has been achieved by the installation of a direct telex leased line into its head office in Piraeus —where all operational work is carried out—as well as to its liai- son office in Port Said. This telex line, which is solely for the use of Candia, is said to be the first of its kind between New York and

Candia represents more than 600 owners and charterers in 37 countries, handling approximately 200 ships per month either through the Canal or to any Egyp- tian port. The firm can demon- strate that it handles all aspects of a client's vessel transiting the

Egypt, communicating all instruc- tions via its unique telex line, re- ceiving and relaying reports, han- dling all requirements of the ves- sel, to collecting and auditing ac- counts and refunding any credit balances in U.S. dollars.

Candia is also the official agent and representative in Continental

America (as well as Greece and the Far East) for MISR Petrole- um, the giant state-run petro- leum company. MISR supplies all grades of bunkers at the Suez

Canal and any Egyptian port.

Candia can, therefore, offer its clients in the U.S. bunkers at very competitive prices and terms.