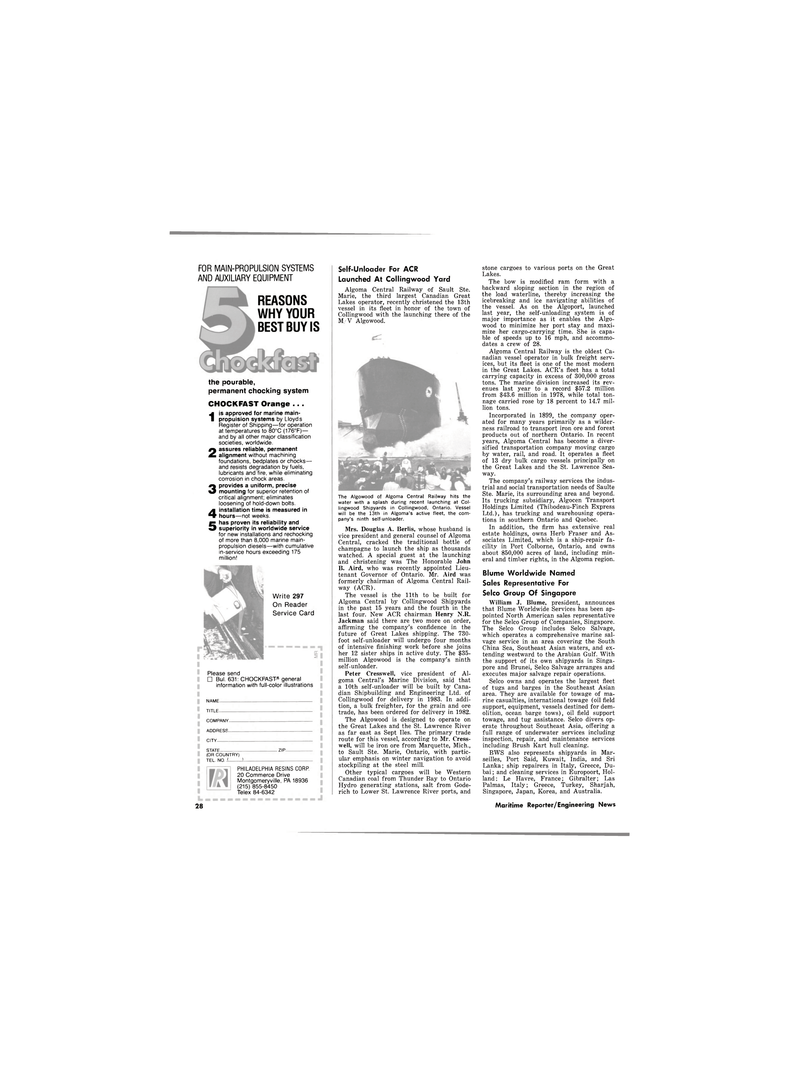 Register of Shipping—for operation at temperatures to 80°C (176°F)— and by all other major classification societies, worldwide. 2 assures reliable, permanent alignment without machining foundations, bedplates or chocks— and resists degradation by fuels, lubricants and fire, while eliminating corrosion in chock areas. 3 provides a uniform, precise mounting for superior retention of critical alignment; eliminates loosening of hold-down bolts. 4 installation time is measured in hours—not weeks. 5 has proven its reliability and superiority in worldwide service for new installations and rechocking of more than 8,000 marine main- propulsion diesels—with cumulative in-service hours exceeding 175 million!

Lakes operator, recently christened the 13th vessel in its fleet in honor of the town of

Collingwood with the launching there of the

The Algowood of Algoma Central Railway hits the water with a splash during recent launching at Col- lingwood Shipyards in Collingwood, Ontario. Vessel will be the 13th in Algoma's active fleet, the com- pany's ninth self-unloader.

Mrs. Douglas A. Berlis, whose husband is vice president and general counsel of Algoma

Central, cracked the traditional bottle of champagne to launch the ship as thousands watched. A special guest at the launching and christening was The Honorable John

The vessel is the 11th to be built for

Algoma Central by Collingwood Shipyards in the past 15 years and the fourth in the last four. New ACR chairman Henry N.R.

Jackman said there are two more on order, affirming the company's confidence in the future of Great Lakes shipping. The 730- foot self-unloader will undergo four months of intensive finishing work before she joins her 12 sister ships in active duty. The $35- million Algowood is the company's ninth self-unloader.

Peter Cresswell, vice president of Al- goma Central's Marine Division, said that a 10th self-unloader will be built by Cana- dian Shipbuilding and Engineering Ltd. of

The Algowood is designed to operate on the Great Lakes and the St. Lawrence River as far east as Sept lies. The primary trade route for this vessel, according to Mr. Cress- well, will be iron ore from Marquette, Mich., to Sault Ste. Marie, Ontario, with partic- ular emphasis on winter navigation to avoid stockpiling at the steel mill.

Other typical cargoes will be Western

The bow is modified ram form with a backward sloping section in the region of the load waterline, thereby increasing the icebreaking and ice navigating abilities of the vessel. As on the Algoport, launched last year, the self-unloading system is of major importance as it enables the Algo- wood to minimize her port stay and maxi- mize her cargo-carrying time. She is capa- ble of speeds up to 16 mph, and accommo- dates a crew of 28.

Algoma Central Railway is the oldest Ca- nadian vessel operator in bulk freight serv- ices, but its fleet is one of the most modern in the Great Lakes. ACR's fleet has a total carrying capacity in excess of 300,000 gross tons. The marine division increased its rev- enues last year to a record $57.2 million from $43.6 million in 1978, while total ton- nage carried rose by 18 percent to 14.7 mil- lion tons.

Incorporated in 1899, the company oper- ated for many years primarily as a wilder- ness railroad to transport iron ore and forest products out of northern Ontario. In recent years, Algoma Central has become a diver- sified transportation company moving cargo by water, rail, and road. It operates a fleet of 13 dry bulk cargo vessels principally on the Great Lakes and the St. Lawrence Sea- way.

Ste. Marie, its surrounding area and beyond.

Ltd.), has trucking and warehousing opera- tions in southern Ontario and Quebec.

In addition, the firm has extensive real estate holdings, owns Herb Fraser and As- sociates Limited, which is a ship-repair fa- cility in Port Colborne, Ontario, and owns about 850,000 acres of land, including min- eral and timber rights, in the Algoma region.

The Selco Group includes Selco Salvage, which operates a comprehensive marine sal- vage service in an area covering the South

China Sea, Southeast Asian waters, and ex- tending westward to the Arabian Gulf. With the support of its own shipyards in Singa- pore and Brunei, Selco Salvage arranges and executes major salvage repair operations.