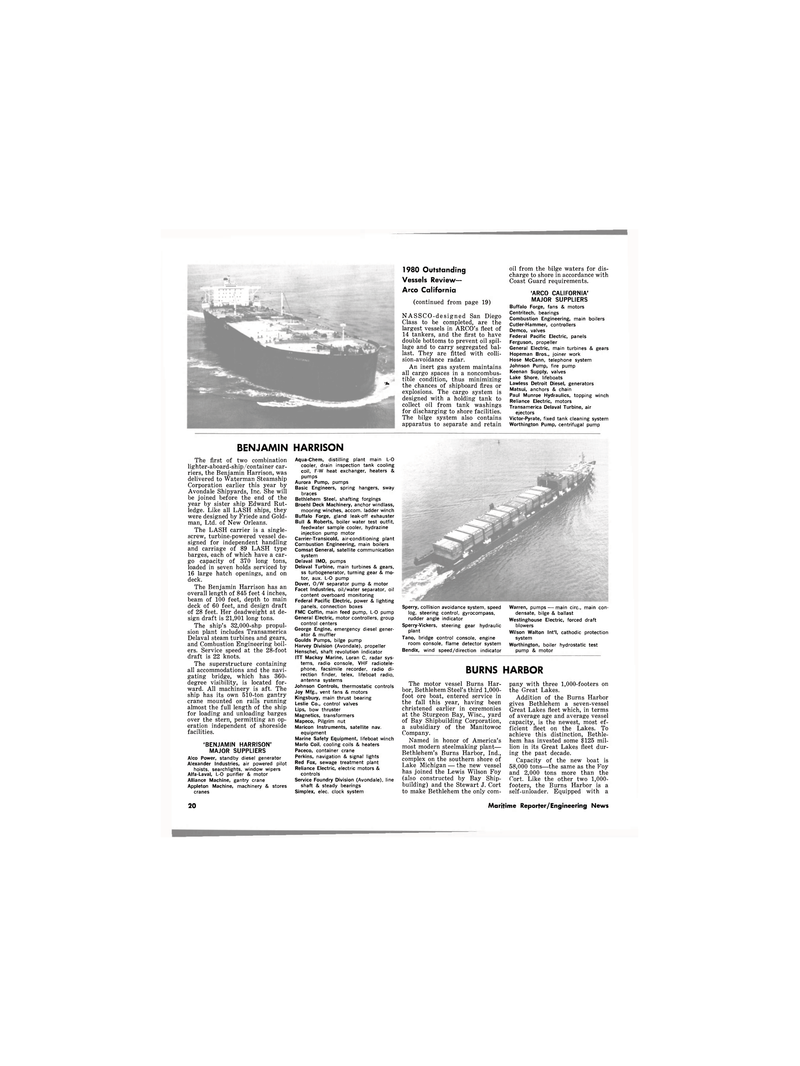 Class to be completed, are the largest vessels in ARCO's fleet of 14 tankers, and the first to have double bottoms to prevent oil spil- lage and to carry segregated bal- last. They are fitted with colli- sion-avoidance radar.

An inert gas system maintains all cargo spaces in a noncombus- tible condition, thus minimizing the chances of shipboard fires or explosions. The cargo system is designed with a holding tank to collect oil from tank washings for discharging to shore facilities.

The first of two combination lighter-aboard-ship/container car- riers, the Benjamin Harrison, was delivered to Waterman Steamship

Corporation earlier this year by

Avondale Shipyards, Inc. She will be joined before the end of the year by sister ship Edward Rut- ledge. Like all LASH ships, they were designed by Friede and Gold- man, Ltd. of New Orleans.

The LASH carrier is a single- screw, turbine-powered vessel de- signed for independent handling and carriage of 89 LASH type barges, each of which have a car- go capacity of 370 long tons, loaded in seven holds serviced by 16 large hatch openings, and on deck.

The superstructure containing all accommodations and the navi- gating bridge, which has 360- degree visibility, is located for- ward. All machinery is aft. The ship has its own 510-ton gantry crane mounted on rails running almost the full length of the ship for loading and unloading barges over the stern, permitting an op- eration independent of shoreside facilities. 'BENJAMIN HARRISON'

The motor vessel Burns Har- bor, Bethlehem Steel's third 1,000- foot ore boat, entered service in the fall this year, having been christened earlier in ceremonies at the Sturgeon Bay, Wise., yard of Bay Shipbuilding Corporation, a subsidiary of the Manitowoc

Named in honor of America's most modern steelmaking plant—

Bethlehem's Burns Harbor, Ind., complex on the southern shore of

Lake Michigan — the new vessel has joined the Lewis Wilson Foy (also constructed by Bay Ship- building) and the Stewart J. Cort to make Bethlehem the only com-

Addition of the Burns Harbor gives Bethlehem a seven-vessel

Great Lakes fleet which, in terms of average age and average vessel capacity, is the newest, most ef- ficient fleet on the Lakes, To achieve this distinction, Bethle- hem has invested some $125 mil- lion in its Great Lakes fleet dur- ing the past decade.

Cort. Like the other two 1,000- footers, the Burns Harbor is a self-unloader. Equipped with a