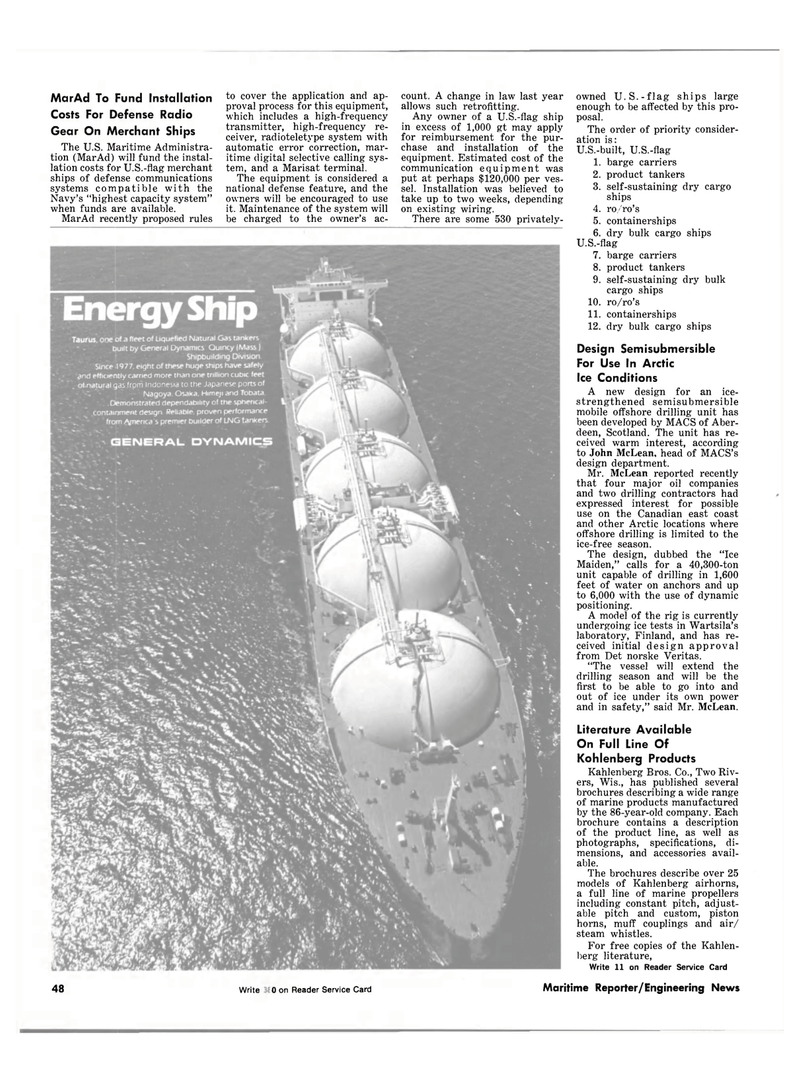 The U.S. Maritime Administra- tion (MarAd) will fund the instal- lation costs for U.S.-flag merchant ships of defense communications systems compatible with the

The equipment is considered a national defense feature, and the owners will be encouraged to use it. Maintenance of the system will be charged to the owner's ac- count. A change in law last year allows such retrofitting.

Any owner of a U.S.-flag ship in excess of 1,000 gt may apply for reimbursement for the pur- chase and installation of the equipment. Estimated cost of the communication equipment was put at perhaps $120,000 per ves- sel. Installation was believed to take up to two weeks, depending on existing wiring.

There are some 530 privately- owned U.S.-flag ships large enough to be affected by this pro- posal.

The order of priority consider- ation is:

For Use In Arctic

A new design for an ice- strengthened semisubmersible mobile offshore drilling unit has been developed by MACS of Aber- deen, Scotland. The unit has re- ceived warm interest, according to John McLean, head of MACS's design department.

Mr. McLean reported recently that four major oil companies and two drilling contractors had expressed interest for possible use on the Canadian east coast and other Arctic locations where offshore drilling is limited to the ice-free season.

The design, dubbed the "Ice

A model of the rig is currently undergoing ice tests in Wartsila's laboratory, Finland, and has re- ceived initial design approval from Det norske Veritas. "The vessel will extend the drilling season and will be the first to be able to go into and out of ice under its own power and in safety," said Mr. McLean.

On Full Line Of

For free copies of the Kahlen- berg literature,