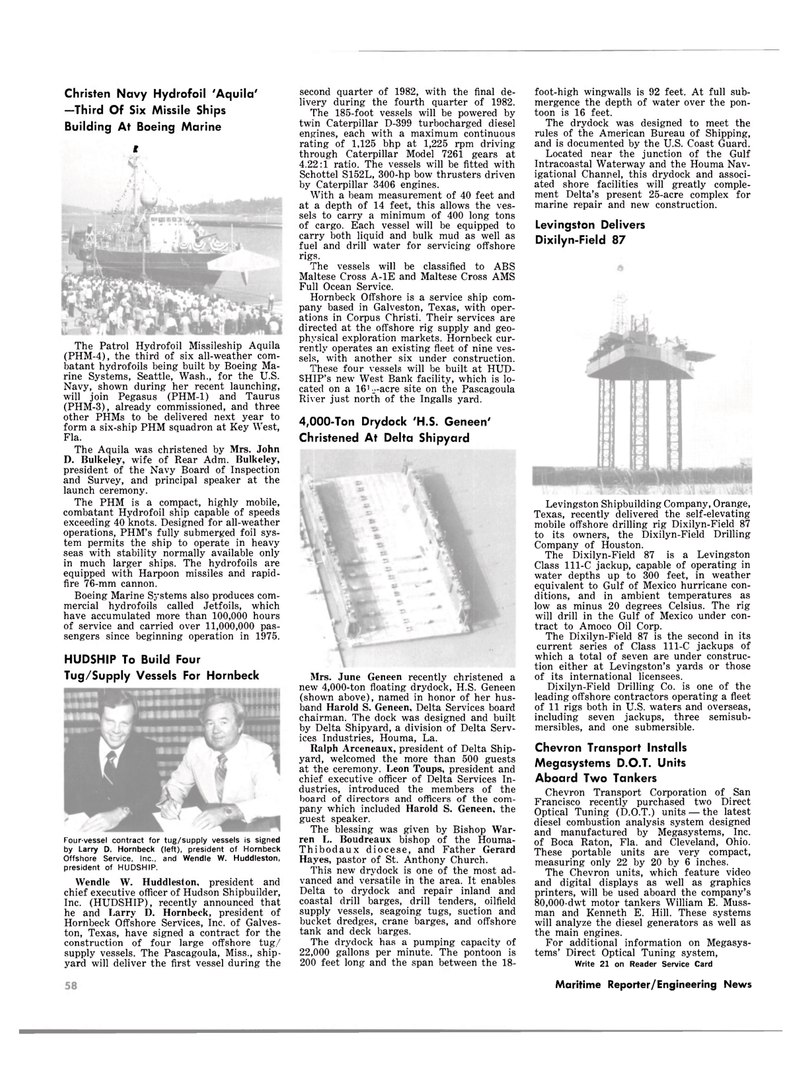 Navy, shown during her recent launching, will join Pegasus (PHM-1) and Taurus (PHM-3), already commissioned, and three other PHMs to be delivered next year to form a six-ship PHM squadron at Key West,

The Aquila was christened by Mrs. John

D. Bulkeley, wife of Rear Adm. Bulkeley, president of the Navy Board of Inspection and Survey, and principal speaker at the launch ceremony.

Inc. (HUDSHIP), recently announced that he and Larry D. Hornbeck, president of

Hornbeck Offshore Services, Inc. of Galves- ton, Texas, have signed a contract for the construction of four large offshore tug/ supply vessels. The Pascagoula, Miss., ship- yard will deliver the first vessel during the second quarter of 1982, with the final de- livery during the fourth quarter of 1982.

The 185-foot vessels will be powered by twin Caterpillar D-399 turbocharged diesel engines, each with a maximum continuous rating of 1,125 bhp at 1,225 rpm driving through Caterpillar Model 7261 gears at 4.22:1 ratio. The vessels will be fitted with

With a beam measurement of 40 feet and at a depth of 14 feet, this allows the ves- sels to carry a minimum of 400 long tons of cargo. Each vessel will be equipped to carry both liquid and bulk mud as well as fuel and drill water for servicing offshore rigs.

The vessels will be classified to ABS

Hornbeck Offshore is a service ship com- pany based in Galveston, Texas, with oper- ations in Corpus Christi. Their services are directed at the offshore rig supply and geo- physical exploration markets. Hornbeck cur- rently operates an existing fleet of nine ves- sels, with another six under construction.

These four vessels will be built at HUD-

SHIP's new West Bank facility, which is lo- cated on a 161 L.-acre site on the Pascagoula

Ralph Arceneaux, president of Delta Ship- yard, welcomed the more than 500 guests at the ceremony. Leon Toups, president and chief executive officer of Delta Services In- dustries, introduced the members of the board of directors and officers of the com- pany which included Harold S. Geneen, the guest speaker.

The blessing was given by Bishop War- ren L. Boudreaux bishop of the Houma-

This new drydock is one of the most ad- vanced and versatile in the area. It enables

The drydock has a pumping capacity of 22,000 gallons per minute. The pontoon is 200 feet long and the span between the 18- foot-high wingwalls is 92 feet. At full sub- mergence the depth of water over the pon- toon is 16 feet.

The drydock was designed to meet the rules of the American Bureau of Shipping, and is documented by the U.S. Coast Guard.

Located near the junction of the Gulf

The Dixilyn-Field 87 is a Levingston

Class 111-C jackup, capable of operating in water depths up to 300 feet, in weather equivalent to Gulf of Mexico hurricane con- ditions, and in ambient temperatures as low as minus 20 degrees Celsius. The rig will drill in the Gulf of Mexico under con- tract to Amoco Oil Corp.

The Dixilyn-Field 87 is the second in its current series of Class 111-C jackups of which a total of seven are under construc- tion either at Levingston's yards or those of its international licensees.

Dixilyn-Field Drilling Co. is one of the leading offshore contractors operating a fleet of 11 rigs both in U.S. waters and overseas, including seven jackups, three semisub- mersibles, and one submersible.

These portable units are very compact, measuring only 22 by 20 by 6 inches.

The Chevron units, which feature video and digital displays as well as graphics printers, will be used aboard the company's 80,000-dwt motor tankers William E. Muss- man and Kenneth E. Hill. These systems will analyze the diesel generators as well as the main engines.