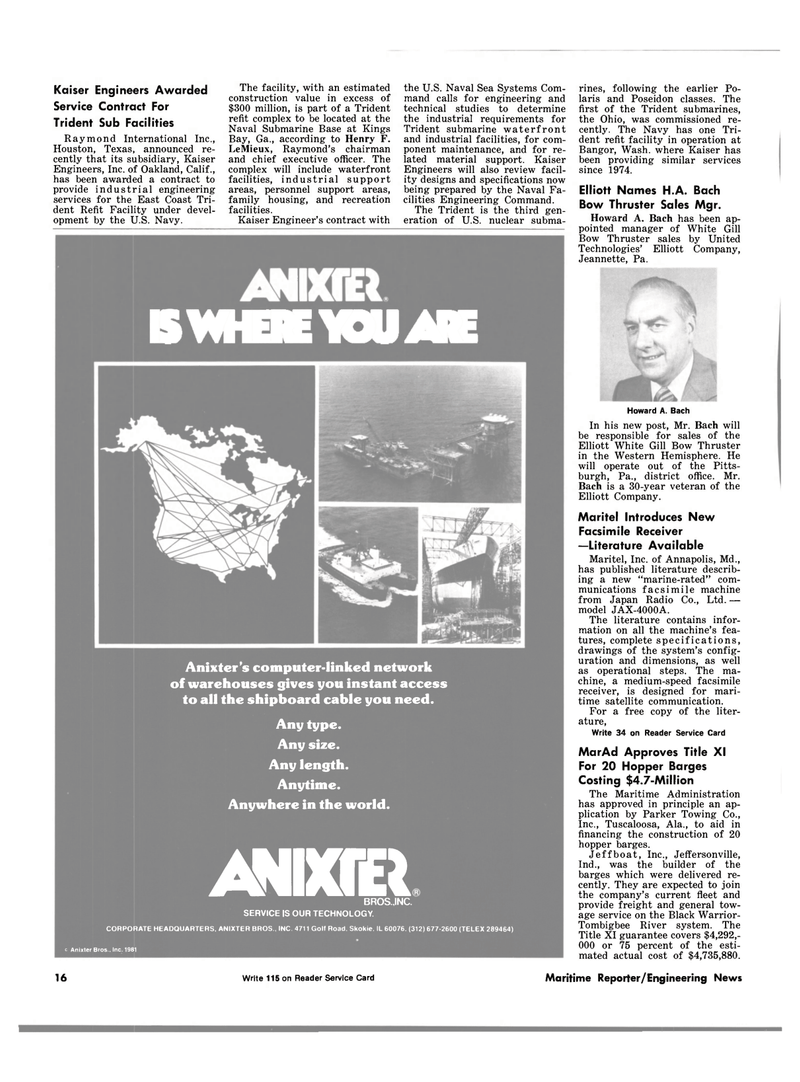 Houston, Texas, announced re- cently that its subsidiary, Kaiser

Engineers, Inc. of Oakland, Calif., has been awarded a contract to provide industrial engineering services for the East Coast Tri- dent Refit Facility under devel- opment by the U.S. Navy.

The facility, with an estimated construction value in excess of $300 million, is part of a Trident refit complex to be located at the

Naval Submarine Base at Kings

Bay, Ga., according to Henry F.

Kaiser Engineer's contract with the U.S. Naval Sea Systems Com- mand calls for engineering and technical studies to determine the industrial requirements for

The Trident is the third gen- eration of U.S. nuclear subma- rines, following the earlier Po- laris and Poseidon classes. The first of the Trident submarines, the Ohio, was commissioned re- cently. The Navy has one Tri- dent refit facility in operation at

Bangor, Wash, where Kaiser has been providing similar services since 1974.

Howard A. Bach has been ap- pointed manager of White Gill

In his new post, Mr. Bach will be responsible for sales of the

Elliott White Gill Bow Thruster in the Western Hemisphere. He will operate out of the Pitts- burgh, Pa., district office. Mr.

Bach is a 30-year veteran of the

The literature contains infor- mation on all the machine's fea- tures, complete specifications, drawings of the system's config- uration and dimensions, as well as operational steps. The ma- chine, a medium-speed facsimile receiver, is designed for mari- time satellite communication.

For a free copy of the liter- ature,

The Maritime Administration has approved in principle an ap- plication by Parker Towing Co.,

Inc., Tuscaloosa, Ala., to aid in financing the construction of 20 hopper barges.

Ind., was the builder of the barges which were delivered re- cently. They are expected to join the company's current fleet and provide freight and general tow- age service on the Black Warrior-

Anixter's computer-linked network off warehouses gives you instant access to all the shipboard cable you need.

Anywhere in the world. mum

SERVICE IS OUR TECHNOLOGY.