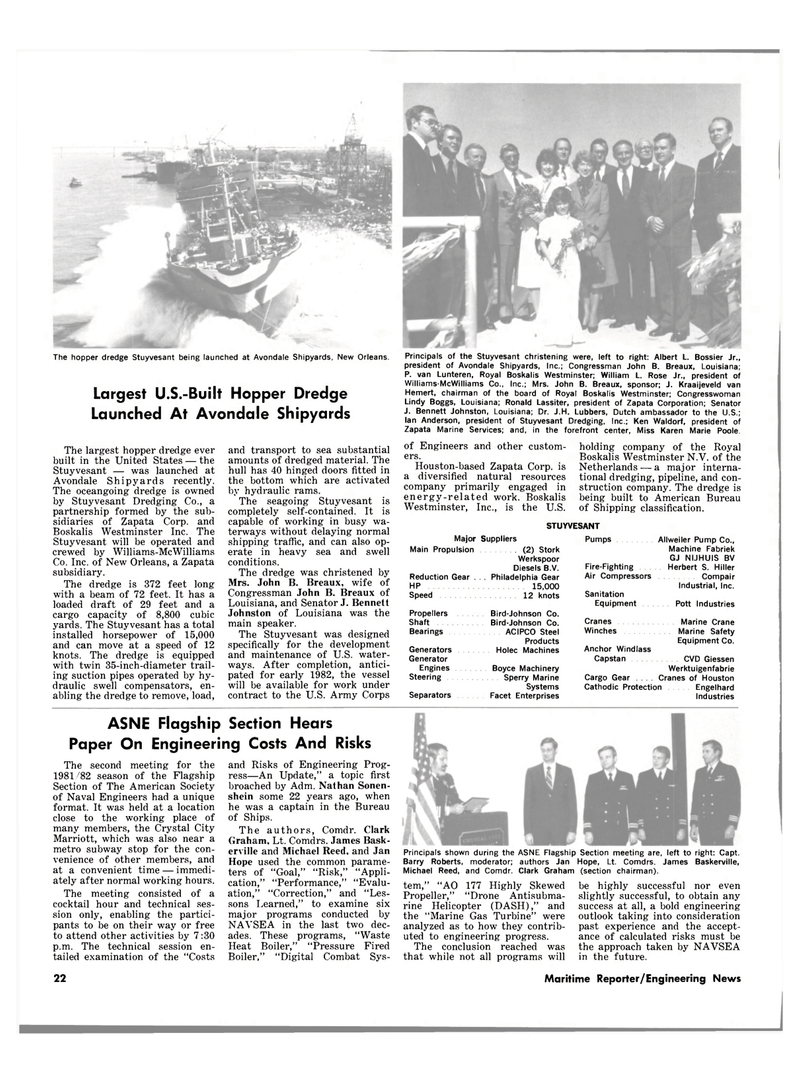 The largest hopper dredge ever built in the United States — the

Stuyvesant — was launched at

The oceangoing dredge is owned by Stuyvesant Dredging Co., a partnership formed by the sub- sidiaries of Zapata Corp. and

Stuyvesant will be operated and crewed by Williams-McWilliams

The dredge is 372 feet long with a beam of 72 feet. It has a loaded draft of 29 feet and a cargo capacity of 8,800 cubic yards. The Stuyvesant has a total installed horsepower of 15,000 and can move at a speed of 12 knots. The dredge is equipped with twin 35-inch-diameter trail- ing suction pipes operated by hy- draulic swell compensators, en- abling the dredge to remove, load, and transport to sea substantial amounts of dredged material. The hull has 40 hinged doors fitted in the bottom which are activated by hydraulic rams.

The seagoing Stuyvesant is completely self-contained. It is capable of working in busy wa- terways without delaying normal shipping traffic, and can also op- erate in heavy sea and swell conditions.

The dredge was christened by

Mrs. John B. Breaux, wife of

Congressman John B. Breaux of

Johnston of Louisiana was the main speaker.

The Stuyvesant was designed specifically for the development and maintenance of U.S. water- ways. After completion, antici- pated for early 1982, the vessel will be available for work under contract to the U.S. Army Corps of Engineers and other custom- ers.

Westminster, Inc., is the U.S. holding company of the Royal

Boskalis Westminster N.V. of the

Hemert, chairman of the board of Royal Boskalis Westminster; Congresswoman

Paper On Engineering Costs And Risks

Principals shown during the ASNE Flagship Section meeting are, left to right: Capt.

The second meeting for the 1981 82 season of the Flagship

Section of The American Society of Naval Engineers had a unique format. It was held at a location close to the working place of many members, the Crystal City

Marriott, which was also near a metro subway stop for the con- venience of other members, and at a convenient time — immedi- ately after normal working hours.

The meeting consisted of a cocktail hour and technical ses- sion only, enabling the partici- pants to be on their way or free to attend other activities by 7:30 p.m. The technical session en- tailed examination of the "Costs and Risks of Engineering Prog- ress—An Update," a topic first broached by Adm. Nathan Sonen- shein some 22 years ago, when he was a captain in the Bureau of Ships.

NAVSEA in the last two dec- ades. These programs, "Waste

Propeller," "Drone Antisubma- rine Helicopter (DASH)," and the "Marine Gas Turbine" were analyzed as to how they contrib- uted to engineering progress.

The conclusion reached was that while not all programs will be highly successful nor even slightly successful, to obtain any success at all, a bold engineering outlook taking into consideration past experience and the accept- ance of calculated risks must be the approach taken by NAVSEA in the future. 22 Maritime Reporter/Engineering News