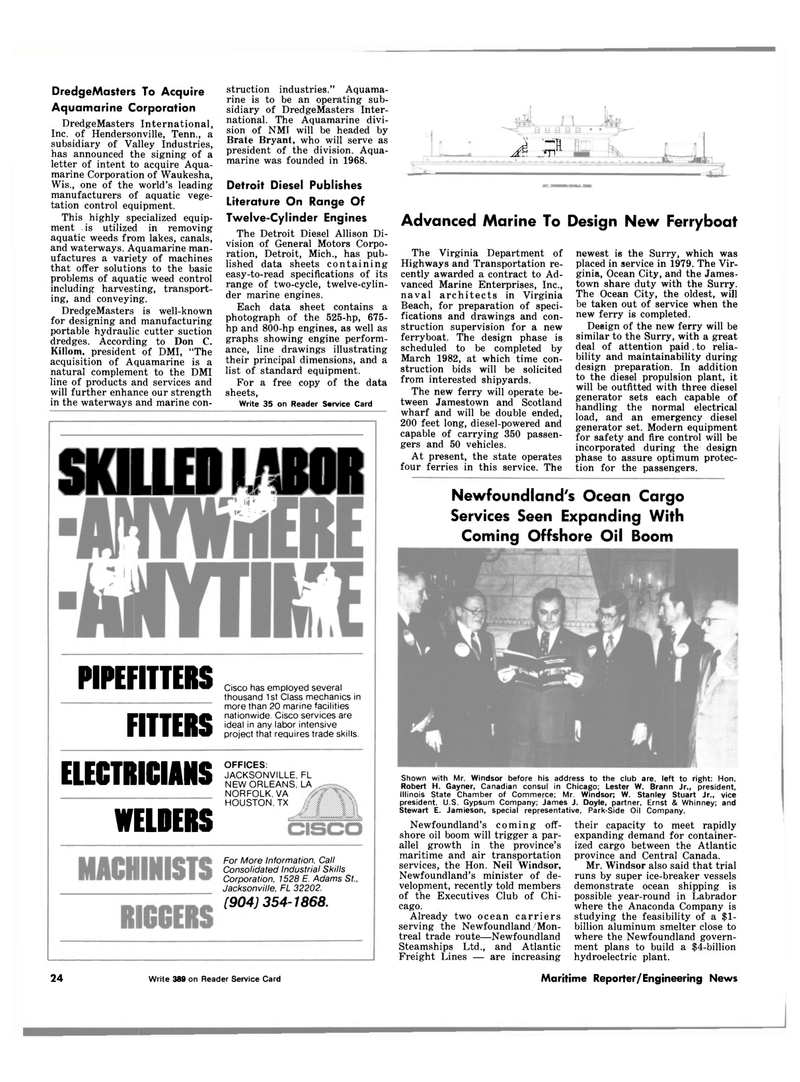 Inc. of Hendersonville, Tenn., a subsidiary of Valley Industries, has announced the signing of a letter of intent to acquire Aqua- marine Corporation of Waukesha,

Wis., one of the world's leading manufacturers of aquatic vege- tation control equipment.

This highly specialized equip- ment is utilized in removing aquatic weeds from lakes, canals, and waterways. Aquamarine man- ufactures a variety of machines that offer solutions to the basic problems of aquatic weed control including harvesting, transport- ing, and conveying.

DredgeMasters is well-known for designing and manufacturing portable hydraulic cutter suction dredges. According to Don C.

Killom, president of DMI, "The acquisition of Aquamarine is a natural complement to the DMI line of products and services and will further enhance our strength in the waterways and marine con- struction industries." Aquama- rine is to be an operating sub- sidiary of DredgeMasters Inter- national. The Aquamarine divi- sion of NMI will be headed by

Brate Bryant, who will serve as president of the division. Aqua- marine was founded in 1968.

Literature On Range Of

Each data sheet contains a photograph of the 525-hp, 675- hp and 800-hp engines, as well as graphs showing engine perform- ance, line drawings illustrating their principal dimensions, and a list of standard equipment.

For a free copy of the data sheets,

The Virginia Department of

Beach, for preparation of speci- fications and drawings and con- struction supervision for a new ferryboat. The design phase is scheduled to be completed by

March 1982, at which time con- struction bids will be solicited from interested shipyards.

The new ferry will operate be- tween Jamestown and Scotland wharf and will be double ended, 200 feet long, diesel-powered and capable of carrying 350 passen- gers and 50 vehicles.

At present, the state operates four ferries in this service. The newest is the Surry, which was placed in service in 1979. The Vir- ginia, Ocean City, and the James- town share duty with the Surry.

The Ocean City, the oldest, will be taken out of service when the new ferry is completed.

Design of the new ferry will be similar to the Surry, with a great deal of attention paid , to relia- bility and maintainability during design preparation. In addition to the diesel propulsion plant, it will be outfitted with three diesel generator sets each capable of handling the normal electrical load, and an emergency diesel generator set. Modern equipment for safety and fire control will be incorporated during the design phase to assure optimum protec- tion for the passengers.

Shown with Mr. Windsor before his address to the club are, left to right: Hon.

Freight Lines — are increasing their capacity to meet rapidly expanding demand for container- ized cargo between the Atlantic province and Central Canada.