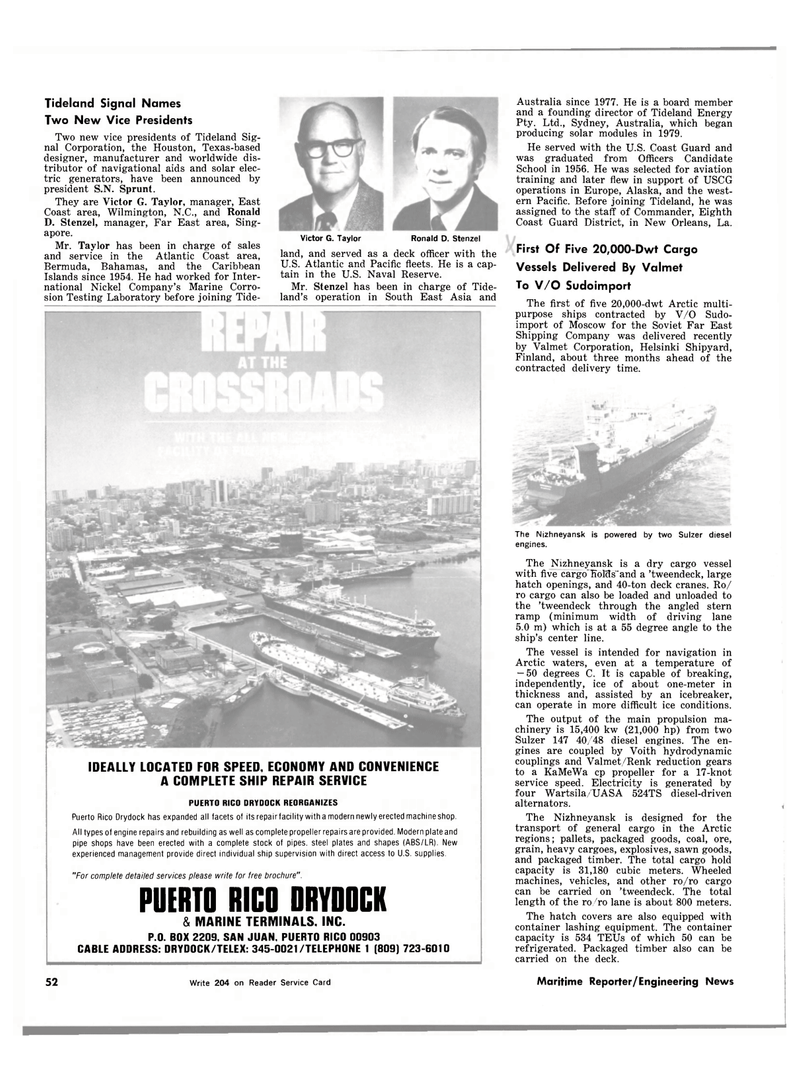 Mr. Taylor has been in charge of sales and service in the Atlantic Coast area,

Bermuda, Bahamas, and the Caribbean

Islands since 1954. He had worked for Inter- national Nickel Company's Marine Corro- sion Testing Laboratory before joining Tide- land, and served as a deck officer with the

U.S. Atlantic and Pacific fleets. He is a cap- tain in the U.S. Naval Reserve.

Mr. Stenzel has been in charge of Tide- land's operation in South East Asia and

Puerto Rico Drydock has expanded all facets of its repairfacility with a modern newly erected machine shop.

Australia since 1977. He is a board member and a founding director of Tideland Energy

He served with the U.S. Coast Guard and was graduated from Officers Candidate

School in 1956. He was selected for aviation training and later flew in support of USCG operations in Europe, Alaska, and the west- ern Pacific. Before joining Tideland, he was assigned to the staff of Commander, Eighth

Finland, about three months ahead of the contracted delivery time.

The Nizhneyansk is powered by two Sulzer diesel engines.

The Njzhneyansk is a dry cargo vessel with five cargo holds 'and a 'tweendeck, large hatch openings, and 40-ton deck cranes. Ro/ ro cargo can also be loaded and unloaded to the 'tweendeck through the angled stern ramp (minimum width of driving lane 5.0 m) which is at a 55 degree angle to the ship's center line.

The vessel is intended for navigation in

Arctic waters, even at a temperature of — 50 degrees C. It is capable of breaking, independently, ice of about one-meter in thickness and, assisted by an icebreaker, can operate in more difficult ice conditions.

The Nizhneyansk is designed for the transport of general cargo in the Arctic regions; pallets, packaged goods, coal, ore, grain, heavy cargoes, explosives, sawn goods, and packaged timber. The total cargo hold capacity is 31,180 cubic meters. Wheeled machines, vehicles, and other ro/ro cargo can be carried on 'tweendeck. The total length of the ro/ro lane is about 800 meters.

The hatch covers are also equipped with container lashing equipment. The container capacity is 534 TEUs of which 50 can be refrigerated. Packaged timber also can be carried on the deck.