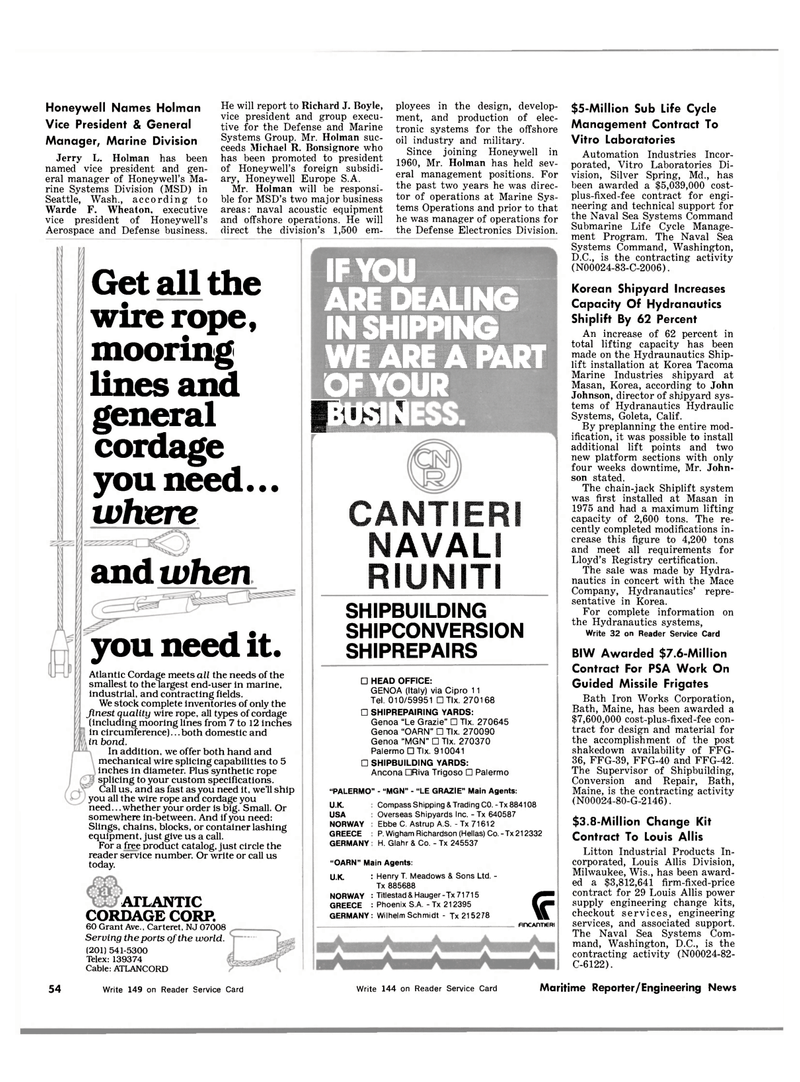 Seattle, Wash., according to

He will report to Richard J. Boyle, vice president and group execu- tive for the Defense and Marine

Mr. Holman will be responsi- ble for MSD's two major business areas: naval acoustic equipment and offshore operations. He will direct the division's 1,500 em- ployees in the design, develop- ment, and production of elec- tronic systems for the offshore oil industry and military.

Since joining Honeywell in 1960, Mr. Holman has held sev- eral management positions. For the past two years he was direc- tor of operations at Marine Sys- tems Operations and prior to that he was manager of operations for the Defense Electronics Division. $5-Million Sub Life Cycle

Masan, Korea, according to John

The chain-jack Shiplift system was first installed at Masan in 1975 and had a maximum lifting capacity of 2,600 tons. The re- cently completed modifications in- crease this figure to 4,200 tons and meet all requirements for

For complete information on the Hydranautics systems,

Contract For PSA Work On

The Supervisor of Shipbuilding,

Get all the wire rope, mooring lines and general cordage you need... where and when you need it.

Atlantic Cordage meets all the needs of the smallest to the largest end-user in marine, industrial, and contracting fields.

We stock complete inventories of only the finest quality wire rope, all types of cordage (including mooring lines from 7 to 12 inches in circumference)... both domestic and in bond.

In addition, we offer both hand and mechanical wire splicing capabilities to 5 inches in diameter. Plus synthetic rope splicing to your custom specifications.

Call us, and as fast as you need it, we'll ship you all the wire rope and cordage you need.. .whether your order is big. Small. Or somewhere in-between. And if you need:

Slings, chains, blocks, or container lashing equipment, just give us a call.

For a free product catalog, just circle the reader service number. Or write or call us today.

IF YOU ARE DEALING

IN SHIPPING WE ARE A PART