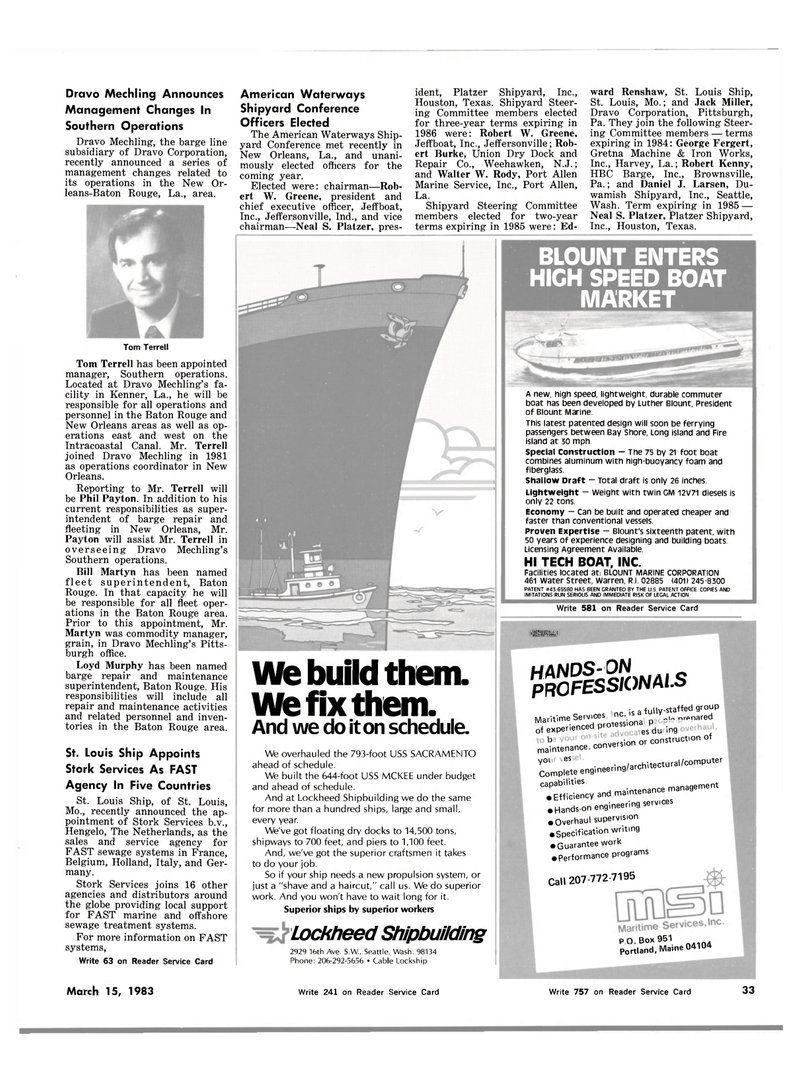 Dravo Mechling, the barge line subsidiary of Dravo Corporation, recently announced a series of management changes related to its operations in the New Or- leans-Baton Rouge, La., area.

Located at Dravo Mechling's fa- cility in Kenner, La., he will be responsible for all operations and personnel in the Baton Rouge and

Reporting to Mr. Terrell will be Phil Payton. In addition to his current responsibilities as super- intendent of barge repair and fleeting in New Orleans, Mr.

Rouge. In that capacity he will be responsible for all fleet oper- ations in the Baton Rouge area.

Prior to this appointment, Mr.

Hengelo, The Netherlands, as the sales and service agency for

Belgium, Holland, Italy, and Ger- many.

For more information on FAST systems,

This latest patented design will soon be ferrying passengers between Bay Shore, Long island and Fire island at 30 mph.

Special Construction - The 75 by 21 foot boat combines aluminum with high-buoyancy foam and fiberglass.

Lightweight - Weight with twin CM 12V71 diesels is only 22 tons.

Economy — Can be built and operated cheaper and faster than conventional vessels.

And we do it on schedule.

We overhauled the 793-foot USS SACRAMENTO ahead of schedule.

We built the 644-foot USS MCKEE under budget and ahead of schedule.

And at Lockheed Shipbuilding we do the same for more than a hundred ships, large and small, every year.

And, we've got the superior craftsmen it takes to do your job.

So if your ship needs a new propulsion system, or just a "shave and a haircut," call us. We do superior work. And you won't have to wait long for it.