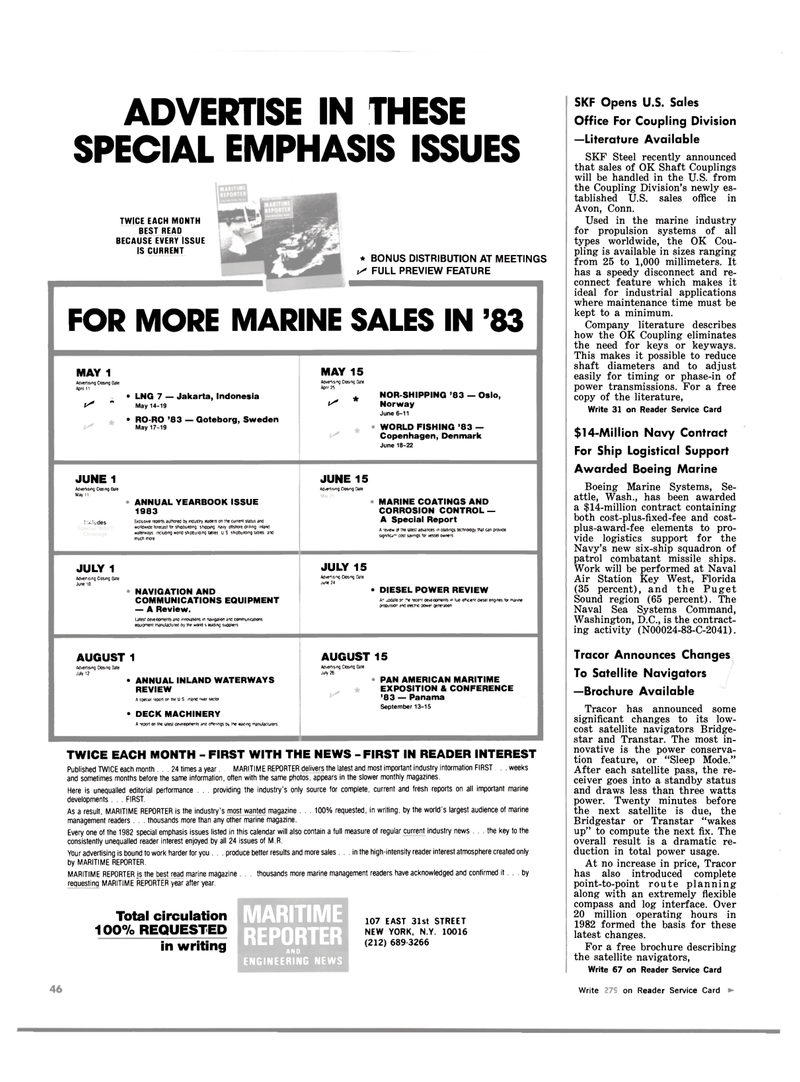 ADVERTISE IN THESE SPECIAL EMPHASIS ISSUES

IS CURRENT * BONUS DISTRIBUTION AT MEETINGS iS FULL PREVIEW FEATURE

FOR MORE MARINE SALES IN '83

TWICE EACH MONTH - FIRST WITH THE NEWS - FIRST IN READER INTEREST

Published TWICE each month . . 24 times a year MARITIME REPORTER delivers the latest and most important industry intormation FIRST . weeks and sometimes months before the same information, often with the same photos, appears in the slower monthly magazines.

Here is unequalled editorial performance . providing the industry's only source for complete, current and fresh reports on all important marine developments . . . FIRST.

As a result, MARITIME REPORTER is the industry's most wanted magazine . . . 100% requested, in writing, by the world's largest audience of marine management readers . . . thousands more than any other marine magazine.

Every one of the 1982 special emphasis issues listed in this calendar will also contain a full measure of regular current industry news ... the key to the consistently unequalled reader interest enjoyed by all 24 issues of M.R.

Your advertising is bound to work harder for you . produce better results and more sales . . in the high-intensity reader interest atmosphere created only by MARITIME REPORTER.

SKF Steel recently announced that sales of OK Shaft Couplings will be handled in the U.S. from the Coupling Division's newly es- tablished U.S. sales office in

Used in the marine industry for propulsion systems of all types worldwide, the OK Cou- pling is available in sizes ranging from 25 to 1,000 millimeters. It has a speedy disconnect and re- connect feature which makes it ideal for industrial applications where maintenance time must be kept to a minimum.

Company literature describes how the OK Coupling eliminates the need for keys or keyways.

This makes it possible to reduce shaft diameters and to adjust easily for timing or phase-in of power transmissions. For a free copy of the literature,

Boeing Marine Systems, Se- attle, Wash., has been awarded a $14-million contract containing both cost-plus-fixed-fee and cost- plus-award-fee elements to pro- vide logistics support for the

Work will be performed at Naval

Tracor has announced some significant changes to its low- cost satellite navigators Bridge- star and Transtar. The most in- novative is the power conserva- tion feature, or "Sleep Mode."

After each satellite pass, the re- ceiver goes into a standby status and draws less than three watts power. Twenty minutes before the next satellite is due, the

Bridgestar or Transtar "wakes up" to compute the next fix. The overall result is a dramatic re- duction in total power usage.

At no increase in price, Tracor has also introduced complete point-to-point route planning along with an extremely flexible compass and log interface. Over 20 million operating hours in 1982 formed the basis for these latest changes.

For a free brochure describing the satellite navigators,