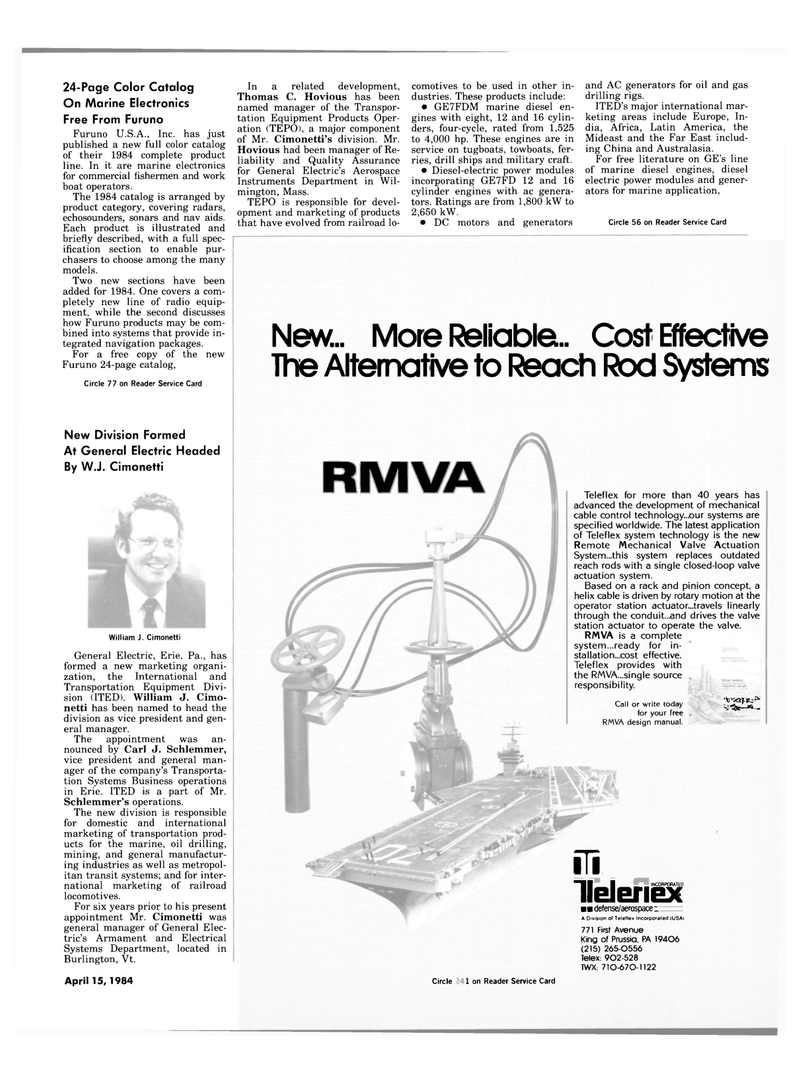 Furuno U.S.A., Inc. has just published a new full color catalog of their 1984 complete product line. In it are marine electronics for commercial fishermen and work boat operators.

Each product is illustrated and briefly described, with a full spec- ification section to enable pur- chasers to choose among the many models.

Two new sections have been added for 1984. One covers a com- pletely new line of radio equip- ment, while the second discusses how Furuno products may be com- bined into systems that provide in- tegrated navigation packages.

For a free copy of the new

In a related development,

TEPO is responsible for devel- opment and marketing of products that have evolved from railroad lo- comotives to be used in other in- dustries. These products include: • GE7FDM marine diesel en- gines with eight, 12 and 16 cylin- ders, four-cycle, rated from 1,525 to 4,000 hp. These engines are in service on tugboats, towboats, fer- ries, drill ships and military craft. • Diesel-electric power modules incorporating GE7FD 12 and 16 cylinder engines with ac genera- tors. Ratings are from 1,800 kW to 2,650 kW. • DC motors and generators and AC generators for oil and gas drilling rigs.

Mideast and the Far East includ- ing China and Australasia.

The appointment was an- nounced by Carl J. Schlemmer, vice president and general man- ager of the company's Transporta- tion Systems Business operations in Erie. ITED is a part of Mr.

The new division is responsible for domestic and international marketing of transportation prod- ucts for the marine, oil drilling, mining, and general manufactur- ing industries as well as metropol- itan transit systems; and for inter- national marketing of railroad locomotives.

For six years prior to his present appointment Mr. Cimonetti was general manager of General Elec- tric's Armament and Electrical

A Division of Telefiex Incorporated (USA)

RMVA Telefiex for more than 40 years has advanced the development of mechanical cable control technology...our systems are specified worldwide. The latest application of Telefiex system technology is the new

Based on a rack and pinion concept, a helix cable is driven by rotary motion at the operator station actuator...travels linearly through the conduit...and drives the valve station actuator to operate the valve.

Call or write today for your free