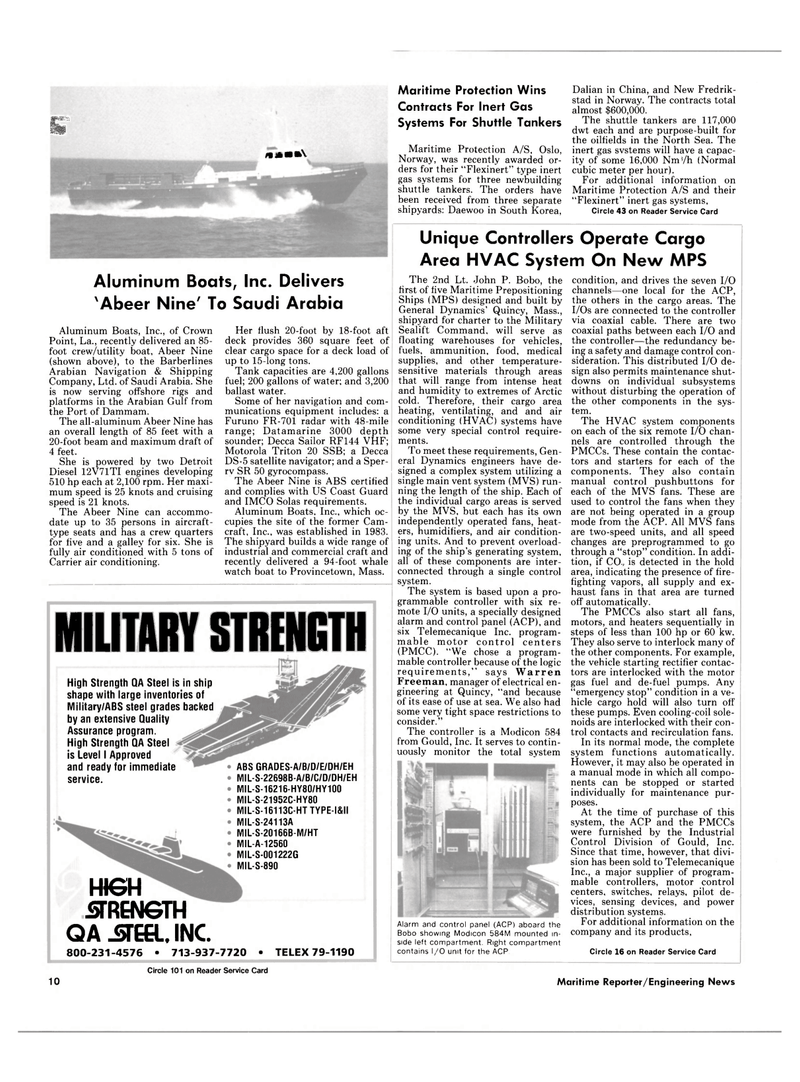 Company, Ltd. of Saudi Arabia. She is now serving offshore rigs and platforms in the Arabian Gulf from the Port of Dammam.

The all-aluminum Abeer Nine has an overall length of 85 feet with a 20-foot beam and maximum draft of 4 feet.

She is powered by two Detroit

The Abeer Nine can accommo- date up to 35 persons in aircraft- type seats and has a crew quarters for five and a galley for six. She is fully air conditioned with 5 tons of

Her flush 20-foot by 18-foot aft deck provides 360 square feet of clear cargo space for a deck load of up to 15-long tons.

Some of her navigation and com- munications equipment includes: a

The Abeer Nine is ABS certified and complies with L^S Coast Guard and IMCO Solas requirements.

Aluminum Boats. Inc., which oc- cupies the site of the former Cam- craft, Inc., was established in 1983.

The shipyard builds a wide range of industrial and commercial craft and recently delivered a 94-foot whale watch boat to Provincetown, Mass.

Norway, was recently awarded or- ders for their "Flexinert" type inert gas systems for three newbuilding shuttle tankers. The orders have been received from three separate shipyards: Daewoo in South Korea,

Dalian in China, and New Fredrik- stad in Norway. The contracts total almost $600,000.

The shuttle tankers are 117,000 dwt each and are purpose-built for the oilfields in the North Sea. The inert gas svstems will have a capac- ity of some 16,000 Nm'/h (Normal cubic meter per hour).

For additional information on

High Strength QA Steel is Level I Approved and ready for immediate service.

Ships (MPS) designed and built by

General Dynamics' Quincy, Mass., shipyard for charter to the Military

Sealift Command, will serve as floating warehouses for vehicles, fuels, ammunition, food, medical supplies, and other temperature- sensitive materials through areas that will range from intense heat and humidity to extremes of Arctic cold. Therefore, their cargo area heating, ventilating, and and air conditioning (HVAC) systems have some very special control require- ments.

To meet these requirements, Gen- eral Dynamics engineers have de- signed a complex system utilizing a single main vent system (MVS) run- ning the length of the ship. Each of the individual cargo areas is served by the MVS, but each has its own independently operated fans, heat- ers, humidifiers, and air condition- ing units. And to prevent overload- ing of the ship's generating system, all of these components are inter- connected through a single control system.

Freeman, manager of electrical en- gineering at Quincy, "and because of its ease of use at sea. We also had some very tight space restrictions to consider."

The controller is a Modicon 584 from Gould, Inc. It serves to contin- uously monitor the total system

Alarm and controf panel (ACP) aboard the

Bobo showing Modicon 584M mounted in- side left compartment. Right compartment contains I/O unit for the ACP condition, and drives the seven I/O channels—one local for the ACP, the others in the cargo areas. The

I/Os are connected to the controller via coaxial cable. There are two coaxial paths between each I/O and the controller—the redundancy be- ing a safety and damage control con- sideration. This distributed I/O de- sign also permits maintenance shut- downs on individual subsystems without disturbing the operation of the other components in the sys- tem.

PMCCs. These contain the contac- tors and starters for each of the components. They also contain manual control pushbuttons for each of the MVS fans. These are used to control the fans when they are not being operated in a group mode from the ACP. All MVS fans are two-speed units, and all speed changes are preprogrammed to go through a "stop" condition. In addi- tion, if CO, is detected in the hold area, indicating the presence of fire- fighting vapors, all supply and ex- haust fans in that area are turned off automatically.

The PMCCs'also start all fans, motors, and heaters sequentially in steps of less than 100 hp or 60 kw.

They also serve to interlock many of the other components. For example, the vehicle starting rectifier contac- tors are interlocked with the motor gas fuel and de-fuel pumps. Any "emergency stop" condition in a ve- hicle cargo hold will also turn off these pumps. Even cooling-coil sole- noids are interlocked with their con- trol contacts and recirculation fans.

In its normal mode, the complete system functions automatically.

However, it may also be operated in a manual mode in which all compo- nents can be stopped or started individually for maintenance pur- poses.

At the time of purchase of this system, the ACP and the PMCCs were furnished by the Industrial

Since that time, however, that divi- sion has been sold to Telemecanique

For additional information on the company and its products,