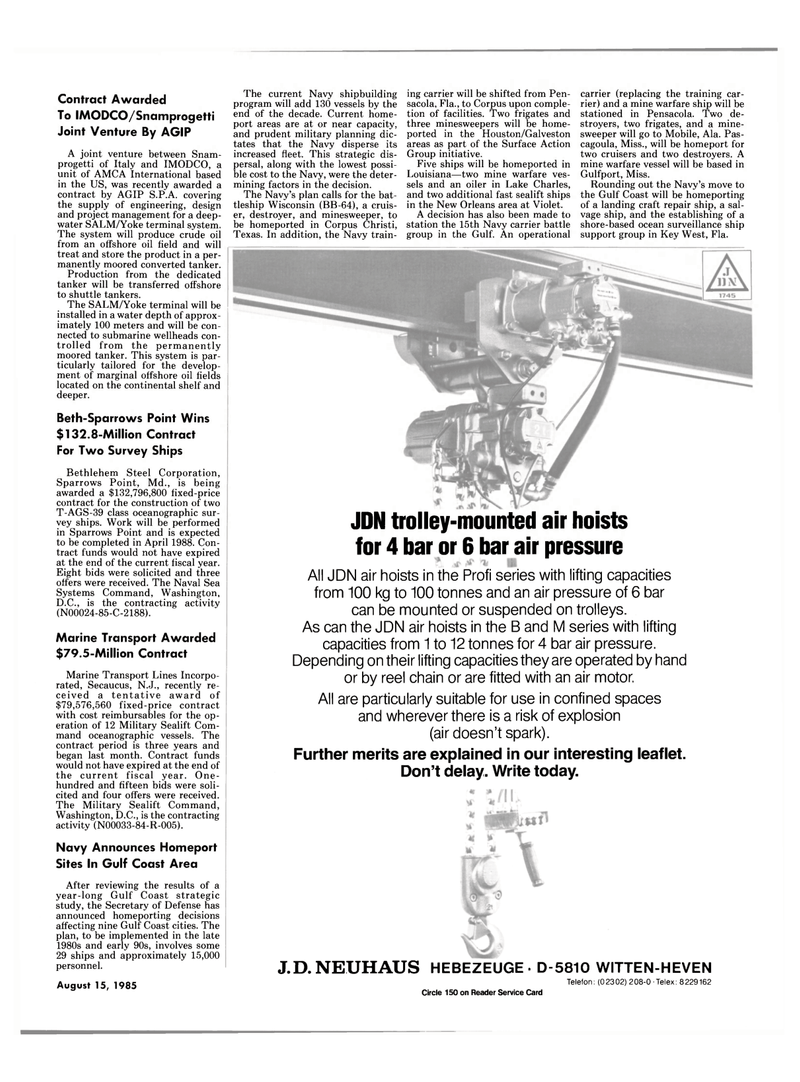 A joint venture between Snam- progetti of Italy and IMODCO, a unit of AMCA International based in the US, was recently awarded a contract by AGIP S.P.A. covering the supply of engineering, design and project management for a deep- water SALM/Yoke terminal system.

The system will produce crude oil from an offshore oil field and will treat and store the product in a per- manently moored converted tanker.

Production from the dedicated tanker will be transferred offshore to shuttle tankers.

The SALM/Yoke terminal will be installed in a water depth of approx- imately 100 meters and will be con- nected to submarine wellheads con- trolled from the permanently moored tanker. This system is par- ticularly tailored for the develop- ment of marginal offshore oil fields located on the continental shelf and deeper.

Sparrows Point, Md., is being awarded a $132,796,800 fixed-price contract for the construction of two

T-AGS-39 class oceanographic sur- vey ships. Work will be performed in Sparrows Point and is expected to be completed in April 1988. Con- tract funds would not have expired at the end of the current fiscal year.

Eight bids were solicited and three offers were received. The Naval Sea

Marine Transport Lines Incorpo- rated, Secaucus, N.J., recently re- ceived a tentative award of $79,576,560 fixed-price contract with cost reimbursables for the op- eration of 12 Military Sealift Com- mand oceanographic vessels. The contract period is three years and began last month. Contract funds would not have expired at the end of the current fiscal year. One- hundred and fifteen bids were soli- cited and four offers were received.

After reviewing the results of a year-long Gulf Coast strategic study, the Secretary of Defense has announced homeporting decisions affecting nine Gulf Coast cities. The plan, to be implemented in the late 1980s and early 90s, involves some 29 ships and approximately 15,000 personnel.

The current Navy shipbuilding program will add 130 vessels by the end of the decade. Current home- port areas are at or near capacity, and prudent military planning dic- tates that the Navy disperse its increased fleet. This strategic dis- persal, along with the lowest possi- ble cost to the Navy, were the deter- mining factors in the decision.

The Navy's plan calls for the bat- tleship Wisconsin (BB-64), a cruis- er, destroyer, and minesweeper, to be homeported in Corpus Christi,

Texas. In addition, the Navy train- ing carrier will be shifted from Pen- sacola, Fla., to Corpus upon comple- tion of facilities. Two frigates and three minesweepers will be home- ported in the Houston/Galveston areas as part of the Surface Action

Five ships will be homeported in

Louisiana—two mine warfare ves- sels and an oiler in Lake Charles, and two additional fast sealift ships in the New Orleans area at Violet.

A decision has also been made to station the 15th Navy carrier battle group in the Gulf. An operational carrier (replacing the training car- rier) and a mine warfare ship will be stationed in Pensacola. Two de- stroyers, two frigates, and a mine- sweeper will go to Mobile, Ala. Pas- cagoula, Miss., will be homeport for two cruisers and two destroyers. A mine warfare vessel will be based in

Rounding out the Navy's move to the Gulf Coast will be homeporting of a landing craft repair ship, a sal- vage ship, and the establishing of a shore-based ocean surveillance ship support group in Key West, Fla.

All JDN air hoists in the Profi series with lifting capacities from 100 kg to 100 tonnes and an air pressure of 6 bar can be mounted or suspended on trolleys.

As can the JDN air hoists in the B and M series with lifting capacities from 1 to 12 tonnes for 4 bar air pressure.

Depending on their lifting capacities they are operated by hand or by reel chain or are fitted with an air motor.

All are particularly suitable for use in confined spaces and wherever there is a risk of explosion (air doesn't spark).

Further merits are explained in our interesting leaflet.