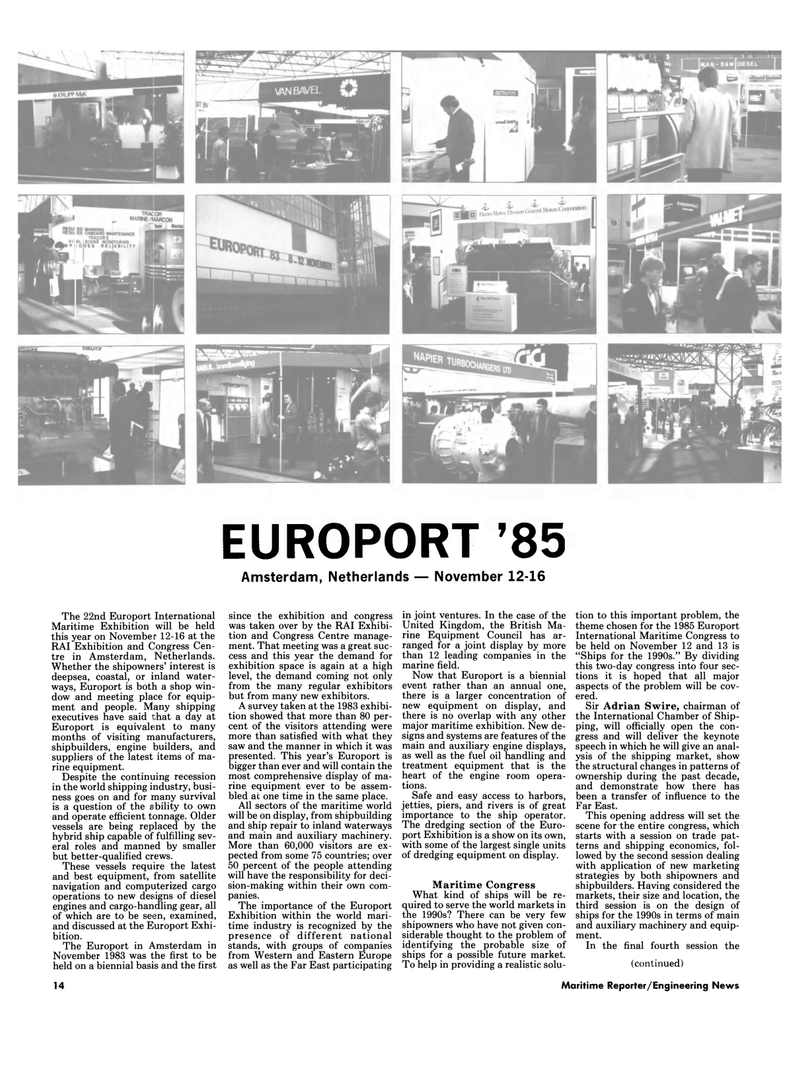 Whether the shipowners' interest is deepsea, coastal, or inland water- ways, Europort is both a shop win- dow and meeting place for equip- ment and people. Many shipping executives have said that a day at

Europort is equivalent to many months of visiting manufacturers, shipbuilders, engine builders, and suppliers of the latest items of ma- rine equipment.

Despite the continuing recession in the world shipping industry, busi- ness goes on and for many survival is a question of the ability to own and operate efficient tonnage. Older vessels are being replaced by the hybrid ship capable of fulfilling sev- eral roles and manned by smaller but better-qualified crews.

These vessels require the latest and best equipment, from satellite navigation and computerized cargo operations to new designs of diesel engines and cargo-handling gear, all of which are to be seen, examined, and discussed at the Europort Exhi- bition.

The Europort in Amsterdam in

November 1983 was the first to be held on a biennial basis and the first since the exhibition and congress was taken over by the RAI Exhibi- tion and Congress Centre manage- ment. That meeting was a great suc- cess and this year the demand for exhibition space is again at a high level, the demand coming not only from the many regular exhibitors but from many new exhibitors.

A survey taken at the 1983 exhibi- tion showed that more than 80 per- cent of the visitors attending were more than satisfied with what they saw and the manner in which it was presented. This year's Europort is bigger than ever and will contain the most comprehensive display of ma- rine equipment ever to be assem- bled at one time in the same place.

All sectors of the maritime world will be on display, from shipbuilding and ship repair to inland waterways and main and auxiliary machinery.

More than 60,000 visitors are ex- pected from some 75 countries; over 50 percent of the people attending will have the responsibility for deci- sion-making within their own com- panies.

The importance of the Europort

Exhibition within the world mari- time industry is recognized by the presence of different national stands, with groups of companies from Western and Eastern Europe as well as the Far East participating in joint ventures. In the case of the

United Kingdom, the British Ma- rine Equipment Council has ar- ranged for a joint display by more than 12 leading companies in the marine field.

Now that Europort is a biennial event rather than an annual one, there is a larger concentration of new equipment on display, and there is no overlap with any other major maritime exhibition. New de- signs and systems are features of the main and auxiliary engine displays, as well as the fuel oil handling and treatment equipment that is the heart of the engine room opera- tions.

Safe and easy access to harbors, jetties, piers, and rivers is of great importance to the ship operator.

The dredging section of the Euro- port Exhibition is a show on its own, with some of the largest single units of dredging equipment on display.

What kind of ships will be re- quired to serve the world markets in the 1990s? There can be very few shipowners who have not given con- siderable thought to the problem of identifying the probable size of ships for a possible future market.

To help in providing a realistic solu- tion to this important problem, the theme chosen for the 1985 Europort

International Maritime Congress to be held on November 12 and 13 is "Ships for the 1990s." By dividing this two-day congress into four sec- tions it is hoped that all major aspects of the problem will be cov- ered.

This opening address will set the scene for the entire congress, which starts with a session on trade pat- terns and shipping economics, fol- lowed by the second session dealing with application of new marketing strategies by both shipowners and shipbuilders. Having considered the markets, their size and location, the third session is on the design of ships for the 1990s in terms of main and auxiliary machinery and equip- ment.