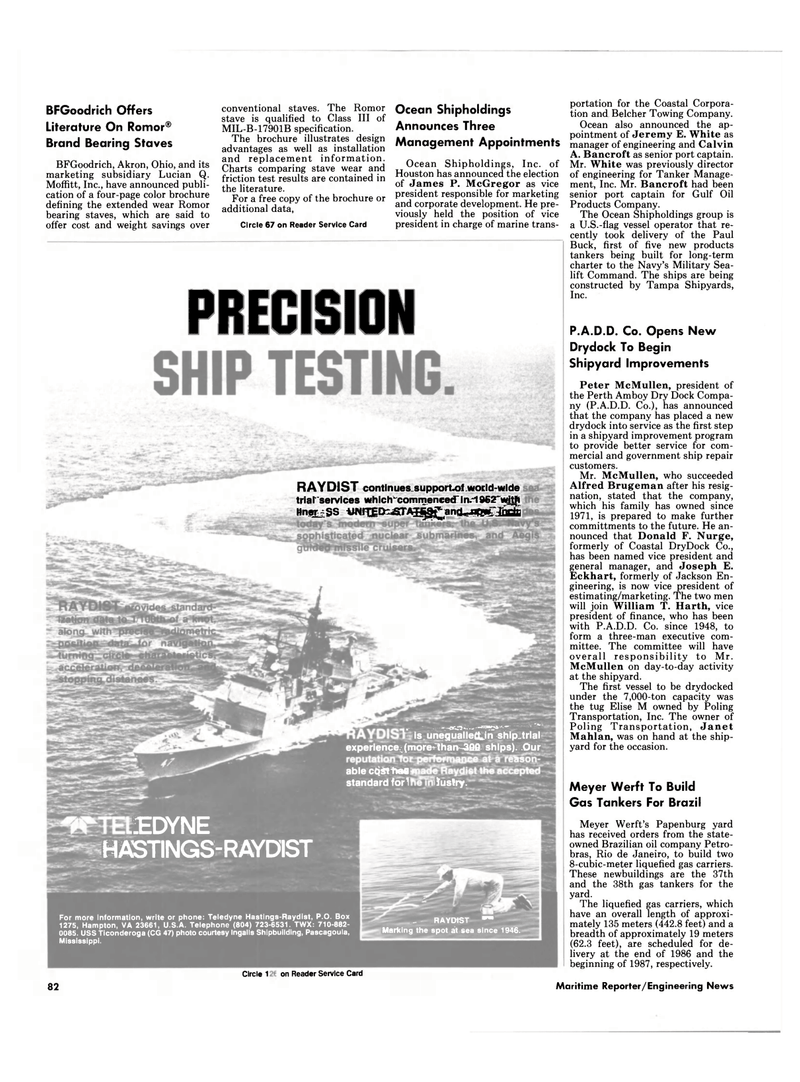 Moffitt, Inc., have announced publi- cation of a four-page color brochure defining the extended wear Romor bearing staves, which are said to offer cost and weight savings over conventional staves. The Romor stave is qualified to Class III of

The brochure illustrates design advantages as well as installation and replacement information.

Charts comparing stave wear and friction test results are contained in the literature.

For a free copy of the brochure or additional data,

Houston has announced the election of James P. McGregor as vice president responsible for marketing and corporate development. He pre- viously held the position of vice president in charge of marine trans-

Ocean also announced the ap- pointment of Jeremy E. White as manager of engineering and Calvin

A. Bancroft as senior port captain.

The Ocean Shipholdings group is a U.S.-flag vessel operator that re- cently took delivery of the Paul

Buck, first of five new products tankers being built for long-term charter to the Navy's Military Sea- lift Command. The ships are being constructed by Tampa Shipyards,

Peter McMullen, president of the Perth Amboy Dry Dock Compa- ny (P.A.D.D. Co.), has announced that the company has placed a new drydock into service as the first step in a shipyard improvement program to provide better service for com- mercial and government ship repair customers.

Alfred Brugeman after his resig- nation, stated that the company, which his family has owned since 1971, is prepared to make further committments to the future. He an- nounced that Donald F. Nurge, formerly of Coastal DryDock Co., has been named vice president and general manager, and Joseph E.

Eckhart, formerly of Jackson En- gineering, is now vice president of estimating/marketing. The two men will join William T. Harth, vice president of finance, who has been with P.A.D.D. Co. since 1948, to form a three-man executive com- mittee. The committee will have overall responsibility to Mr.

McMullen on day-to-day activity at the shipyard.

The first vessel to be drydocked under the 7,000-ton capacity was the tug Elise M owned by Poling

Transportation, Inc. The owner of

Mahlan, was on hand at the ship- yard for the occasion.

These newbuildings are the 37th and the 38th gas tankers for the yard.

The liquefied gas carriers, which have an overall length of approxi- mately 135 meters (442.8 feet) and a breadth of approximately 19 meters (62.3 feet), are scheduled for de- livery at the end of 1986 and the beginning of 1987, respectively.