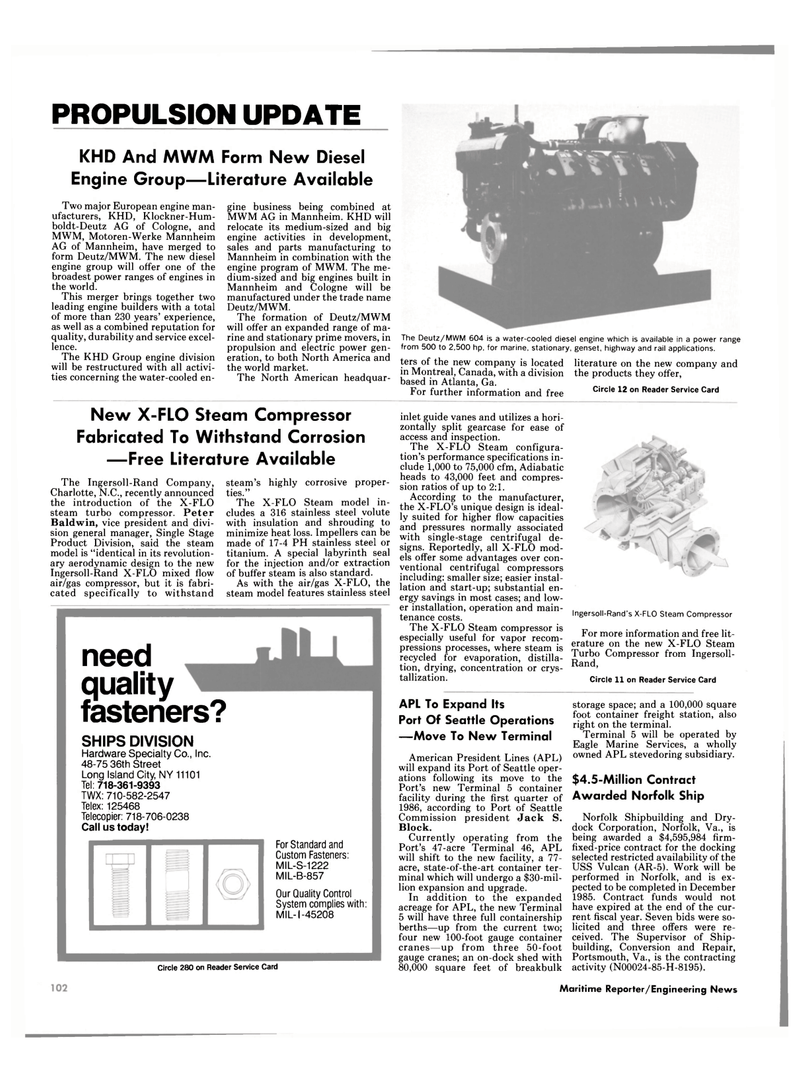 AG of Mannheim, have merged to form Deutz/MWM. The new diesel engine group will offer one of the broadest power ranges of engines in the world.

This merger brings together two leading engine builders with a total of more than 230 years' experience, as well as a combined reputation for quality, durability and service excel- lence.

MWM AG in Mannheim. KHD will relocate its medium-sized and big engine activities in development, sales and parts manufacturing to

Mannheim in combination with the engine program of MWM. The me- dium-sized and big engines built in

Mannheim and Cologne will be manufactured under the trade name

The formation of Deutz/MWM will offer an expanded range of ma- rine and stationary prime movers, in propulsion and electric power gen- eration, to both North America and the world market.

Product Division, said the steam model is "identical in its revolution- ary aerodynamic design to the new

The X-FLO Steam model in- cludes a 316 stainless steel volute with insulation and shrouding to minimize heat loss. Impellers can be made of 17-4 PH stainless steel or titanium. A special labyrinth seal for the injection and/or extraction of buffer steam is also standard.

The Deutz/MWM 604 is a water-cooled diesel engine which is available in a power range from 500 to 2,500 hp, for marine, stationary, genset, highway and rail applications.

Fabricated To Withstand Corrosion —Free Literature Available ters of the new company is located in Montreal, Canada, with a division based in Atlanta, Ga.

For further information and free inlet guide vanes and utilizes a hori- zontally split gearcase for ease of access and inspection.

The X-FLO Steam compressor is especially useful for vapor recom- pressions processes, where steam is recycled for evaporation, distilla- tion, drying, concentration or crys- tallization. literature on the new company and the products they offer,

APL To Expand Its

Port's new Terminal 5 container facility during the first quarter of 1986, according to Port of Seattle

Currently operating from the

Port's 47-acre Terminal 46, APL will shift to the new facility, a 77- acre, state-of-the-art container ter- minal which will undergo a $30-mil- lion expansion and upgrade.

In addition to the expanded acreage for APL, the new Terminal 5 will have three full containership berths—up from the current two; four new 100-foot gauge container cranes—up from three 50-foot gauge cranes; an on-dock shed with 80,000 square feet of breakbulk storage space; and a 100,000 square foot container freight station, also right on the terminal.

Terminal 5 will be operated by

Norfolk Shipbuilding and Dry- dock Corporation, Norfolk, Va., is being awarded a $4,595,984 firm- fixed-price contract for the docking selected restricted availability of the

USS Vulcan (AR-5). Work will be performed in Norfolk, and is ex- pected to be completed in December 1985. Contract funds would not have expired at the end of the cur- rent fiscal year. Seven bids were so- licited and three offers were re- ceived. The Supervisor of Ship- building, Conversion and Repair,