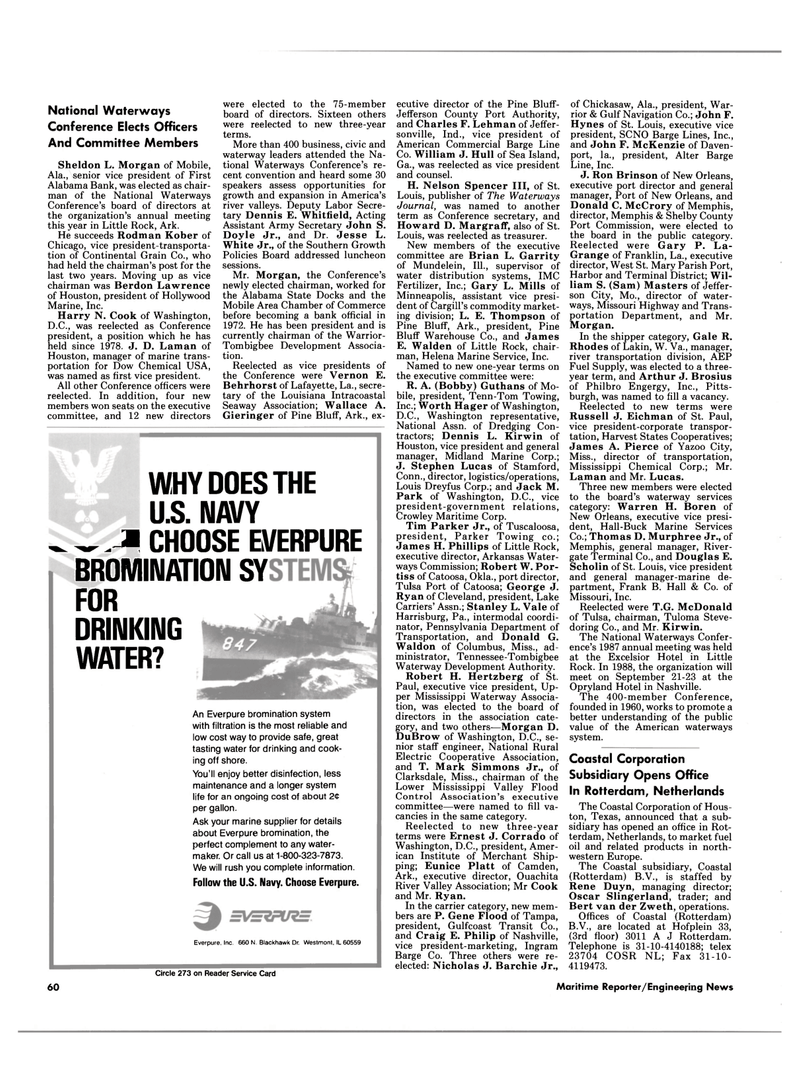 Ala., senior vice president of First

Alabama Bank, was elected as chair- man of the National Waterways

Conference's board of directors at the organization's annual meeting this year in Little Rock, Ark.

He succeeds Rodman Kober of

Chicago, vice president-transporta- tion of Continental Grain Co., who had held the chairman's post for the last two years. Moving up as vice chairman was Berdon Lawrence of Houston, president of Hollywood

D.C., was reelected as Conference president, a position which he has held since 1978. J. D. Laman of

White Jr., of the Southern Growth

Mr. Morgan, the Conference's newly elected chairman, worked for the Alabama State Docks and the

Mobile Area Chamber of Commerce before becoming a bank official in 1972. He has been president and is currently chairman of the Warrior-

Reelected as vice presidents of the Conference were Vernon E.

Behrhorst of Lafayette, La., secre- tary of the Louisiana Intracoastal

An Everpure bromination system with filtration is the most reliable and low cost way to provide safe, great tasting water for drinking and cook- ing off shore.

You'll enjoy better disinfection, less maintenance and a longer system life for an ongoing cost of about 2

Ask your marine supplier for details about Everpure bromination, the perfect complement to any water- maker. Or call us at 1-800-323-7873.

We will rush you complete information.

Ga., was reelected as vice president and counsel.

Louis, publisher of The Waterways

Journal, was named to another term as Conference secretary, and

Louis, was reelected as treasurer.

Named to new one-year terms on the executive committee were:

Inc.; Worth Hager of Washington,

Paul, executive vice president, Up- per Mississippi Waterway Associa- tion, was elected to the board of directors in the association cate- gory, and two others—Morgan D.

Clarksdale, Miss., chairman of the

Reelected to new three-year terms were Ernest J. Corrado of

Port Commission, were elected to the board in the public category.

In the shipper category, Gale R.

Fuel Supply, was elected to a three- year term, and Arthur J. Brosius of Philbro Engergy, Inc., Pitts- burgh, was named to fill a vacancy.

James A. Pierce of Yazoo City,

The 400-member Conference, founded in 1960, works to promote a better understanding of the public value of the American waterways system.

The Coastal Corporation of Hous- ton, Texas, announced that a sub- sidiary has opened an office in Rot- terdam, Netherlands, to market fuel oil and related products in north- western Europe.

The Coastal subsidiary, Coastal (Rotterdam) B.V., is staffed by