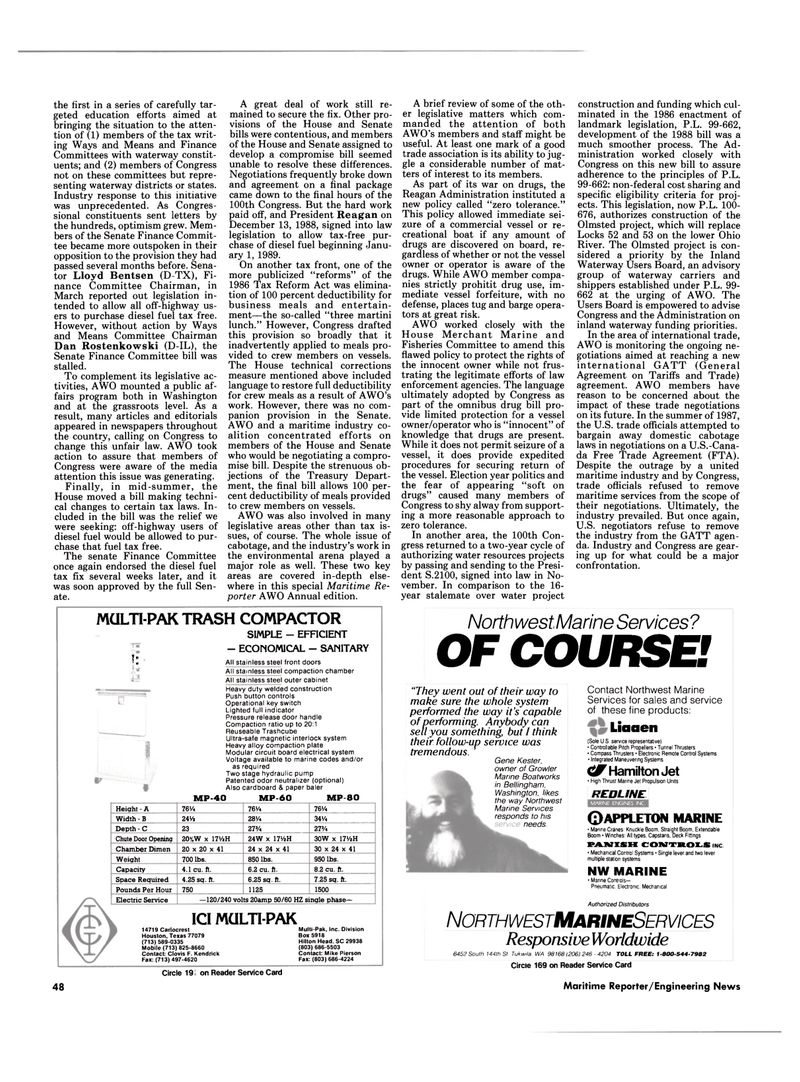 Committees with waterway constit- uents; and (2) members of Congress not on these committees but repre- senting waterway districts or states.

Industry response to this initiative was unprecedented. As Congres- sional constituents sent letters by the hundreds, optimism grew. Mem- bers of the Senate Finance Commit- tee became more outspoken in their opposition to the provision they had passed several months before. Sena- tor Lloyd Bentsen (D-TX), Fi- nance Committee Chairman, in

March reported out legislation in- tended to allow all off-highway us- ers to purchase diesel fuel tax free.

However, without action by Ways and Means Committee Chairman

To complement its legislative ac- tivities, AWO mounted a public af- fairs program both in Washington and at the grassroots level. As a result, many articles and editorials appeared in newspapers throughout the country, calling on Congress to change this unfair law. AWO took action to assure that members of

Congress were aware of the media attention this issue was generating.

Finally, in mid-summer, the

House moved a bill making techni- cal changes to certain tax laws. In- cluded in the bill was the relief we were seeking: off-highway users of diesel fuel would be allowed to pur- chase that fuel tax free.

The senate Finance Committee once again endorsed the diesel fuel tax fix several weeks later, and it was soon approved by the full Sen- ate.

Negotiations frequently broke down and agreement on a final package came down to the final hours of the 100th Congress. But the hard work paid off, and President Reagan on

On another tax front, one of the more publicized "reforms" of the 1986 Tax Reform Act was elimina- tion of 100 percent deductibility for business meals and entertain- ment—the so-called "three martini lunch." However, Congress drafted this provision so broadly that it inadvertently applied to meals pro- vided to crew members on vessels.

The House technical corrections measure mentioned above included language to restore full deductibility for crew meals as a result of AWO's work. However, there was no com- panion provision in the Senate.

AWO and a maritime industry co- alition concentrated efforts on members of the House and Senate who would be negotiating a compro- mise bill. Despite the strenuous ob- jections of the Treasury Depart- ment, the final bill allows 100 per- cent deductibility of meals provided to crew members on vessels.

AWO was also involved in many legislative areas other than tax is- sues, of course. The whole issue of cabotage, and the industry's work in the environmental arena played a major role as well. These two key areas are covered in-depth else- where in this special Maritime Re- porter AWO Annual edition.

Compaction ratio up to 20:1

Voltage available to marine codes and/or as required

AWO's members and staff might be useful. At least one mark of a good trade association is its ability to jug- gle a considerable number of mat- ters of interest to its members.

As part of its war on drugs, the

This policy allowed immediate sei- zure of a commercial vessel or re- creational boat if any amount of drugs are discovered on board, re- gardless of whether or not the vessel owner or operator is aware of the drugs. While AWO member compa- nies strictly prohitit drug use, im- mediate vessel forfeiture, with no defense, places tug and barge opera- tors at great risk.

AWO worked closely with the

Fisheries Committee to amend this flawed policy to protect the rights of the innocent owner while not frus- trating the legitimate efforts of law enforcement agencies. The language ultimately adopted by Congress as part of the omnibus drug bill pro- vide limited protection for a vessel owner/operator who is "innocent" of knowledge that drugs are present.

While it does not permit seizure of a vessel, it does provide expedited procedures for securing return of the vessel. Election year politics and the fear of appearing "soft on drugs" caused many members of

In another area, the 100th Con- gress returned to a two-year cycle of authorizing water resources projects by passing and sending to the Presi- dent S.2100, signed into law in No- vember. In comparison to the 16- year stalemate over water project construction and funding which cul- minated in the 1986 enactment of landmark legislation, P.L. 99-662, development of the 1988 bill was a much smoother process. The Ad- ministration worked closely with

Congress on this new bill to assure adherence to the principles of P.L. 99-662: non-federal cost sharing and specific eligibility criteria for proj- ects. This legislation, now P.L. 100- 676, authorizes construction of the

Olmsted project, which will replace

River. The Olmsted project is con- sidered a priority by the Inland

Waterway Users Board, an advisory group of waterway carriers and shippers established under P.L. 99- 662 at the urging of AWO. The

Users Board is empowered to advise

Congress and the Administration on inland waterway funding priorities.

In the area of international trade,

Agreement on Tariffs and Trade) agreement. AWO members have reason to be concerned about the impact of these trade negotiations on its future. In the summer of 1987, the U.S. trade officials attempted to bargain away domestic cabotage laws in negotiations on a U.S.-Cana- da Free Trade Agreement (FTA).

Despite the outrage by a united maritime industry and by Congress, trade officials refused to remove maritime services from the scope of their negotiations. Ultimately, the industry prevailed. But once again,

U.S. negotiators refuse to remove the industry from the GATT agen- da. Industry and Congress are gear- ing up for what could be a major confrontation.

Northwest Marine Services? OF COURSE "They went out of their way to make sure the whole system performed the way it's capable of performing. Anybody can sell you something, but I think their follow-up

Services for sales and service of these fine products: