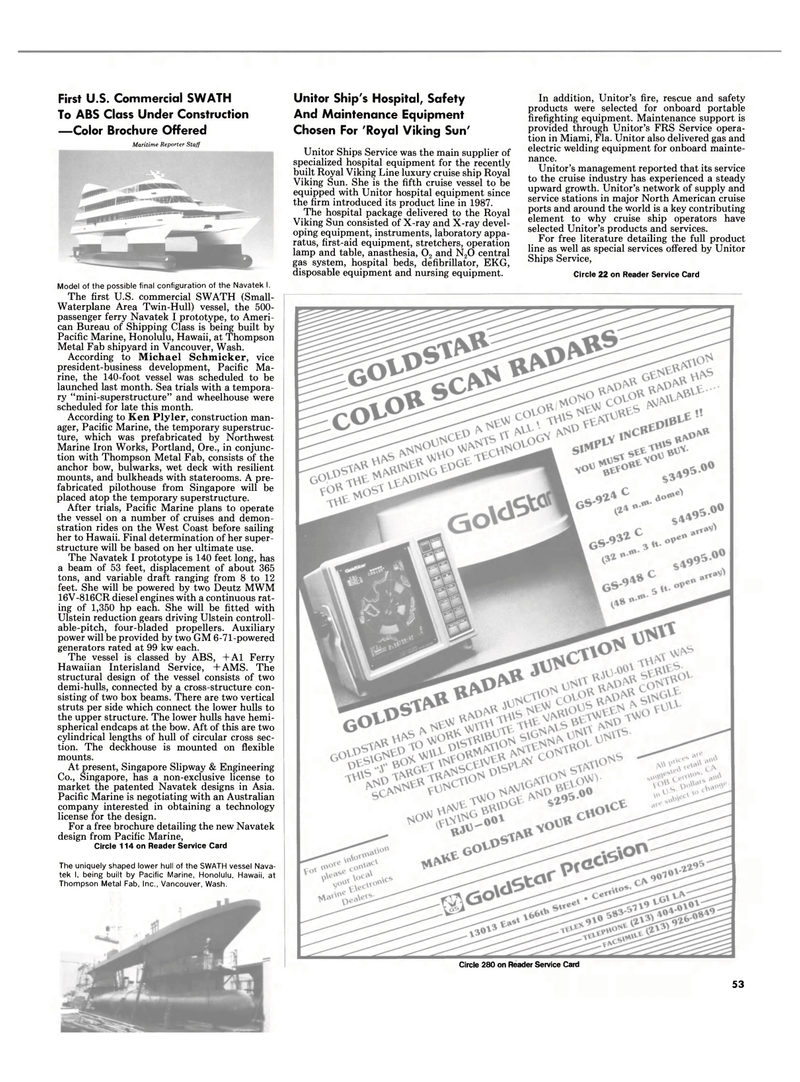 Model of the possible final configuration of the Navatek I.

Waterplane Area Twin-Hull) vessel, the 500- passenger ferry Navatek I prototype, to Ameri- can Bureau of Shipping Class is being built by

According to Michael Schmicker, vice president-business development, Pacific Ma- rine, the 140-foot vessel was scheduled to be launched last month. Sea trials with a tempora- ry "mini-superstructure" and wheelhouse were scheduled for late this month.

According to Ken Plyler, construction man- ager, Pacific Marine, the temporary superstruc- ture, which was prefabricated by Northwest

Marine Iron Works, Portland, Ore., in conjunc- tion with Thompson Metal Fab, consists of the anchor bow, bulwarks, wet deck with resilient mounts, and bulkheads with staterooms. A pre- fabricated pilothouse from Singapore will be placed atop the temporary superstructure.

After trials, Pacific Marine plans to operate the vessel on a number of cruises and demon- stration rides on the West Coast before sailing her to Hawaii. Final determination of her super- structure will be based on her ultimate use.

The Navatek I prototype is 140 feet long, has a beam of 53 feet, displacement of about 365 tons, and variable draft ranging from 8 to 12 feet. She will be powered by two Deutz MWM 16V-816CR diesel engines with a continuous rat- ing of 1,350 hp each. She will be fitted with

The vessel is classed by ABS, +A1 Ferry

Hawaiian Interisland Service, +AMS. The structural design of the vessel consists of two demi-hulls, connected by a cross-structure con- sisting of two box beams. There are two vertical struts per side which connect the lower hulls to the upper structure. The lower hulls have hemi- spherical endcaps at the bow. Aft of this are two cylindrical lengths of hull of circular cross sec- tion. The deckhouse is mounted on flexible mounts.

Co., Singapore, has a non-exclusive license to market the patented Navatek designs in Asia.

Pacific Marine is negotiating with an Australian company interested in obtaining a technology license for the design.

For a free brochure detailing the new Navatek design from Pacific Marine,

The uniquely shaped lower hull of the SWATH vessel Nava- tek I, being built by Pacific Marine, Honolulu, Hawaii, at

Viking Sun. She is the fifth cruise vessel to be equipped with Unitor hospital equipment since the firm introduced its product line in 1987.

The hospital package delivered to the Royal

Unitor's management reported that its service to the cruise industry has experienced a steady upward growth. Unitor's network of supply and service stations in major North American cruise ports and around the world is a key contributing element to why cruise ship operators have selected Unitor's products and services.